For those of you who have always considered strategy games a trifle dry for your tastes, I give you Z, the alcoholic, head-banging, gap-toothed, punch-drunk, inbred cousin of Command & Conquer.

For those of you who have always considered strategy games a trifle dry for your tastes, I give you Z, the alcoholic, head-banging, gap-toothed, punch-drunk, inbred cousin of Command & Conquer. Z's opening movie tells the sordid tale of two Bill-and-Ted robot supply ship pilots, late (again) for their scheduled delivery to a combat zone. The player is dropped without ceremony into said combat zone, which at first appears to fall within recognizable C & C operational parameters. After two or three miserable failures, the player realizes that this is not the case. Enemy territory is not captured in the meter-by-meter fashion of other real-time strategy games, but via a Capture the Flag scheme; the Z battlefield is, for some inadequately explored reason, divided into grids of territory, which may partially explain the wonky AI (see below). Z is a game that has what I euphemistically call "the personal touch." As the battle progresses, robotic grunts in the field make the expected reports ("Moving out!" "Let's get 'em!"), as well as the less-expected requests for support ("They're all over us!" "For Christ's sake, do something!"), and the still less-expected direct verbal abuse ("Moron!" "Asshole!") as your beleaguered installations get reduced to their component molecules.

While it is not possible to construct combat installations, structures such as robot factories and radar sites may be taken with chunks of territory. At set intervals, these installations will produce more combat robots or vehicles such as jeeps and tanks, while unattended installations, vehicles and/or packs of weapons are scattered about the battlefield, waiting to be captured or destroyed. Although the game is largely tactical in scale, these neutral pieces of - pardon the pun - Virgin territory add a strategic element, encouraging players to scramble for position and property before the destruction begins. This element is made even more important by the fact that the player who is in control of more territories will have factories that produce units at a higher speed. Players who can grab a lot of land in the first few minutes of the game, and then hang on to it, will have many more units than their opponents in a very short time.

Which brings us to the subject of the game's AI, which certainly is noteworthy. Another word would be singular. Still another would be weird, and that's probably the best one. The AI here is weird. The click-and-select method of movement and combat is present, but the routes taken between a cluster of robotic soldiers and an unattended box of grenades are often questionable. Even to line-of-sight targets, straight lines are often completely avoided. But on the positive side, your soldiers are also capable of making intelligent decisions (like jumping into tanks or assault guns) without you telling them to. Anyway, Z features some pretty neato bonuses, such as the ability to snipe enemy troops right out of their vehicles (allowing the subsequent capture of said vehicles, a really hateful thing to do to a networked opponent) and - my personal favorite - the ability to simply blast and tear your way through obstructive terrain that may be getting in your way, which is something many an infuriated C & C player has wanted to do for a long time now.

Z is a real-time strategy game for the less-obsessive and less-serious among us. Territories are easy to capture, easy to lose, and often just as easy to recapture, and the sheer numbers of units that the player must keep track of are quite a bit less bewildering than those found in some of Z's more steely-eyed, rock-jawed cousins. Also, the inherent humor in the game will probably surface as two or more human opponents face each other via a networked game - at the very least, the verbal abuse will then come from someone you know. 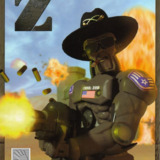