Yu-Gi-Oh! World Championship Tournament 2004, is pure, uncompromised card battling, and it's probably one of the best Yu-Gi-Oh! games to come out on any platform.

Though Konami has tried to shoehorn its Yu-Gi-Oh! license into a myriad of different video game archetypes, its efforts have proven most successful when it sticks to emulating the collectible card game that is the cornerstone of the whole Yu-Gi-Oh! franchise. The latest for the GBA, Yu-Gi-Oh! World Championship Tournament 2004, is pure, uncompromised card battling, and it's probably one of the best Yu-Gi-Oh! games to come out on any platform. The game touts a few appreciable improvements over the last Yu-Gi-Oh! card battle game for the GBA, which will probably be enough to win the favor of hardcore Yu-Gi-Oh! fans, but casual card battlers who already have one of the other Yu-Gi-Oh! collectible card games for the GBA can safely skip this one without missing too much.

Without even the faintest inkling of story pretext to get in the way, World Championship Tournament 2004 tosses you a deck of cards and poses you with a choice of several challengers to face within seconds of turning on the game for the first time. Outside of playing against a series of AI opponents, you can link up GBAs with a friend who also has a copy of the game for some two-player action or for some card-trading action. Furthermore, you can configure up to three unique sets of cards in the game's deck editor, which allows you to sort the cards by a variety of different criteria. This becomes increasingly handy as you gain more cards.

World Championship Tournament 2004 claims to have roughly 100 new cards over the last Yu-Gi-Oh! game, though this is really the only noticeable improvement since the game still basically just emulates the real-world Duel Monsters collectible card game. Collectible card games are rife with very specific rule sets--some of them intuitive, some of them oddly arcane--and Yu-Gi-Oh! has its fair share of both. If you're already familiar with the rules of Duel Monsters, you'll be setting up trap cards and summoning monsters in well under a minute after turning on the game, though if this is your first introduction to card battling, the learning curve will be significantly steeper. The inclusion of a tutorial would've alleviated this issue a bit, though you can learn plenty just by playing. For further assistance, the manual for the game is dense with informational minutiae.

The basic strength of your cards factors heavily into whether or not you'll be victorious, though some smart strategy, thoughtful deck-building, and a spot of luck can help you score a win against a more powerful opponent. Among the collectible-card-game crowd, Yu-Gi-Oh! isn't considered one of the most strategically complex games out there, and this comes across in its video game form as well. Once you've built up your deck to a respectable level and have a strong grasp of the mechanics, most of your losses will come from the weakness of your deck rather than from a fault in your strategy. Despite its relative simplicity, though, there is something enjoyable about the action in Yu-Gi-Oh! In addition, its easy to pacify your obsessive-compulsive tendencies as you meticulously build and tweak your decks.

There's honestly not a whole lot to say about the presentation in World Championship Tournament. Though you can bring up the individual cards and inspect the artwork up close at different points in the game, for the most part, you'll just be looking at a simple representation of the playfield, which is entirely utilitarian and provides virtually no aesthetic appeal. The sound design is also kind of drab and forgettable. Obviously, the way the game looks and sounds wasn't the primary concern of the developer, and to their credit, the actual gameplay isn't really hindered by the game's stripped-down nature.

If you enjoy card battling games, Yu-Gi-Oh! World Championship Tournament 2004 can offer some good fun, though there isn't much here that you haven't seen before. Casual fans of the series or card-battling games in general probably won't see enough of an upgrade over previous games in the series, but if you're die-hard about your Yu-Gi-Oh! fandom, the new monster cards might be enough to make you want to take a look. 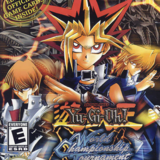