Its beautiful, inspired visuals and consistently fun and inventive gameplay make it a landmark achievement in one of gaming's most beloved genres.

If you were to play Yoshi's Island for the Game Boy Advance without knowing that it was originally released for the Super Nintendo Entertainment System in 1995, you'd think that this handheld game was a cutting-edge, incredibly original title that represented the absolute best of what platformers can offer. Actually, you'd probably think that about the game anyway. Though Yoshi's Island is technically an old game, the GBA version--basically an exact port of the original--looks and feels as fresh and new as ever. The game's truly inspired visuals are matched only by its consistently fun gameplay, making Yoshi's Island not just one of the best action games for Nintendo's latest portable system, but also one of the best platformers for any console this year. Those who hailed Yoshi's Island as an instant classic in 1995 weren't off base--the fact that it holds up as well as it does more than seven years after it first appeared is pretty amazing. But so is the game.

Yoshi's Island was billed as a sequel to Super Mario World, the Super Nintendo's launch game and another undisputed classic. As the name suggests, though, Yoshi's Island isn't really about Nintendo's most famous mascot--it's about his lesser-known lizard buddy, Yoshi, who was introduced in Super Mario World. While Mario could sometimes ride on Yoshi's back in that game, in Yoshi's Island, you control the sticky-tongued, fleet-footed reptile the whole time. Actually, the plot serves as a prequel to all the other Mario adventures. The story begins when newborn baby brothers Mario and Luigi are set upon by a pack of those nasty koopas, who believe that Mario and Luigi will tamper with their nefarious plans when the brothers are all grown up. Luigi is captured, but Mario escapes the tussle and ends up in Yoshi's home. Yoshi is actually one of many multicolored (but otherwise identical) lizard do-gooders, and they take it upon themselves to reunite Mario and his brother and defeat the koopas. That's where you come in. You'll guide Yoshi and baby Mario through six worlds, each with eight stages and numerous secrets, in your quest to bring the brothers back together.

Since this is a game about Yoshi, the gameplay is actually quite a bit different than that of other Mario games. Yoshi even has a bunch of new moves that weren't available to him in Super Mario World. He can still run quickly, jump and stomp on his foes, and lash out with his tongue (forward and also upward), snatching up most any enemy in his path. He can then spit the enemy as a projectile, or swallow it and turn it into an egg. Yoshi can have up to six eggs stocked up at any time, and he can chuck them in any direction at will. Eggs deflect off walls, and you'll sometimes be challenged to toss an egg as though you were going for a bank shot in billiards. Good aim isn't all that's necessary, though--precise jumping is a must, as it is in any self-respecting platformer. Yoshi can't exactly fly, but by pressing and holding the jump button you can make him struggle to gain a little altitude in midair, a life-saving skill that gives you some room for error when you try for a difficult leap.

Falling into a bottomless pit is actually one of the only ways Yoshi can be defeated, since contact with most enemy critters will merely stun him and send baby Mario flying off his back, bawling. Mario will then float about in an energy bubble while a counter starts ticking down. Unless you grab him in time, flying koopas will swoop in and whisk him away, making you lose a life. This won't happen nearly as often as loss of life due to falling, though. The fact that you don't automatically lose a life when you're struck makes Yoshi's Island a little easier than some of its predecessors are, but having to scramble to rescue Mario each time you take a hit leads to many tension-filled situations. It's actually a great system, since it gives the designers license to fill each stage with plenty of enemies and other hazards, yet keeps the difficulty fair. And if losing a life isn't reason enough to recover baby Mario as soon as possible, then wanting to put an end to his incessant crying certainly will be.

The responsive mechanics of Yoshi's Island are great, but the game's level design is really the best thing about it. There's just so much variety to be seen and so much fun to be had in the game's many different levels that you'll never feel like you're just doing more of the same thing, even though the game is quite long. You'll encounter literally dozens of different foes and other creatures during the course of your trek, and while you'll recognize many of them from previous Super Mario games, others are completely new. And virtually all of them are cute, funny, and interesting in some way. The game's bosses are especially memorable. Each world has two bosses to square off against, and they're all gigantic versions of some of the more mundane enemies you've faced before. These bosses aren't especially difficult to defeat, but they're really inventive and fun to fight, and they all look incredibly good. At a time when most games have trouble scraping up so much as a single decent boss battle, it's incredible that Yoshi's Island packs in so many good ones. In general, you'll be impressed not just at the creativity shown in the game's levels and in its various inhabitants, but at the sheer quantity of creativity that went into this game. Even if playing Yoshi's Island weren't so much fun, you'd want to keep playing just to see everything.

All aspects of the game are out of the ordinary, but you'll get to see some particularly weird stuff. For example, at different points, Yoshi can transform into different vehicles! He can turn into a car, a train, a helicopter, a submarine, and more, each with its own unique function and feel when you try to control it. The first time you see Yoshi turn into a big bug-eyed, red-nosed helicopter, you'll know you're not playing a run-of-the-mill platformer. Also, in a couple of levels, harmless-looking floating spores drift through the sky, and if they make contact with Yoshi, they'll cause him to wig out and start hallucinating--his surroundings will start to undulate, and even the background music will slow to lazy crawl as Yoshi stumbles about. Yet another level has Yoshi turning into a snow sled and careening down dangerous slopes. It may be strange stuff, but it's all really neat, and it's sure to please both young and older gamers alike.

Yoshi's Island still looks fabulous after all these years. The Super Nintendo version used a special graphics chip to allow for all the enhanced special effects seen in the game, and all those effects have been ported perfectly to the GBA, making this easily one of the best-looking games on the platform. Even despite all the fancy 3D graphics seen in today's modern games, it's hard not to be impressed by the scaling and rotation effects seen throughout Yoshi's Island, which gives a 3D feel to the game's unmistakably hand-crafted visuals. The game's colorful backgrounds look like something out of a storybook, while all the various creatures--not to mention Yoshi himself--are very well animated and filled with lots of personality. Yoshi's Island sounds great, too, and while there isn't a ton of music in the game, it all fits the overall theme perfectly, and some of it is very catchy. A few of the sounds here are different than in the original version, namely some of Yoshi's cute babylike noises, but even die-hard purists should appreciate the new ones.

There are numerous secrets and bonus challenges to uncover in Yoshi's Island, and while you'll need to play each level in succession at first, there's incentive to go back and retry all of them. The game's multiplayer mode is merely the same remake of the classic Mario Bros. game that's been featured in both previous Super Mario Advance titles, which is somewhat disappointing. But that's about the only fault you can find in Yoshi's Island. This game is so cool it even has a "sleep" mode that allows you to power-down your GBA at any time without losing your progress in a level.

Simply put, Yoshi's Island would make an excellent addition to anyone's collection of Game Boy Advance games. Its beautiful, inspired visuals and consistently fun and inventive gameplay make a landmark achievement in one of gaming's most beloved genres, and even though its star isn't Nintendo's famous plumber, the game itself is every bit as good if not better than any other Mario title to date. Besides being a superb game on its own merits and even by today's high standards, Yoshi's Island is also a great little game to have on the go. So even if you've played it before, and especially if you haven't, you should seriously consider picking it up. 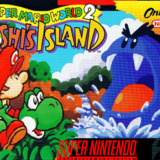