Sadly, there is no reason for anyone to play through Yoda Stories.

The annals of history are thick with lackluster Star Wars games. Although exceptional releases such as Dark Forces, Force Commander, and Jedi Knight serve as examples of positive gaming experiences, the majority of Star Wars titles better resemble the thud you hear when someone's on the receiving end of a Mike Tyson uppercut. Given this history, two possibilities exist for THQ's Game Boy Color release of Yoda Stories. It could either be a satisfying work of art or a festering pile of human waste.

Approximately ten seconds into the game, the phrase "work of art" leaps to mind. Groovy caricatures of Yoda and Luke get the story off on the right foot, while initial glances at the top-down action-RPG levels give one the hope of a Zelda-like experience. Unfortunately, one second after providing Luke with forward momentum, the game's similarities to a dung heap become clear. Instead of animating smoothly, Luke progresses one square at a time, interacting with objects and enemies from eight possible directions. But Luke can only face in four directions! Because of this, pushing boxes or other objects is a chore, since Luke has a tendency to walk around anything he touches. Furthermore, battling Stormtroopers or sand people is nigh impossible, mostly due to the fact that they tend to circle around Luke as you wildly flail a poorly executed lightsabre. Yoda Stories is reminiscent of a Tiger LCD game, and each of its 15 levels plays just as bad, if not worse, than one of those $5 castaways. Though the storyline flows fairly well, getting through it is a major pain, as Luke's entire mission is to wander hinter and yon, gathering objects that can be traded for more objects, all in an effort to act out various aspects of the Star Wars myth. Repetition is quick to set in, enemies are lacking in variety, and about the only bright spot to the gameplay is that the difficulty level is low.

As if the poor control and lackluster gameplay weren't enough, the game delivers a visual experience akin to that of a Viewmaster toy. In fact, it's quite possible that a Viewmaster could deliver better animation and visuals than Yoda Stories. Though still images give the impression that the game will look decent, the truth is that the lack of colors, the animation, and the severe sprite repetition serve as an all-out affront to one's senses. Luke animates with only two or three frames per movement, nonplayer characters with even less, and backgrounds are as stagnant as Mexican well water. Speaking of backgrounds, though the game offers a plethora of locations, each one is rendered from a minimal stock of four templates. Admittedly, they're drawn acceptably, but one or two screen's worth of locales, and you'll be begging to be put down from constant feelings of deja vu. There aren't even any cutscenes to reward the diligent player who completes each level. Even Nintendo's Game & Watch series, which Yoda Stories resembles, has cutscenes and picture galleries!

Further deepening the torture, the game's audio simply begs to be silenced. Weapon and interaction sounds are decent, but the major lack of variety quickly makes them an unwelcome occurrence. Similarly, the game's background music is appropriate, but since a new one doesn't kick in until you reach a later level, gut-wrenching repetition sets in quickly. You can only listen to the first 20 seconds of the Star Wars theme just so much. It's an understatement to say that not since Kickle Cubicle has sound in a video game been so blah and uninspiring.

Sadly, there is no reason for anyone to play through Yoda Stories. The storyline is one that Star Wars fans already know; the gameplay is below that of Quest for Camelot; and better graphics and sound exist in 20-year-old Colecovision games. Furthermore, the game's password save system requires you to reach the end of a level before it offers you the ability to rejoin the quest, almost forcing a person to play the game. If THQ, Torus, and Lucasfilm are lucky, people will forget this stinker quickly. Yoda Stories is quite possibly the worst Star Wars video game ever produced. 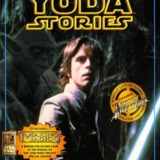