From the desk of Ryu Hayabusa: "Why won't he let me save the world? I just want to help people. And hug animals. And give lavender lollipops to children and old people. Mmm...Momiji's thighs. No, I have to save the world. Where's my binkie?"

These diary entries weren't actually written by the attributed authors, but rather rose from the vivid imagination of Yaiba: Ninja Gaiden Z's antihero. And they tell you much of what you need to know about this hack-and-slash game's unlikable star, as well as its own sense of humor. Ninja Gaiden Z is crass and stupid but rarely funny. It's mean and dumb but never witty or subversive. Listening to its characters speak is like hearing the inner workings of an 8-year-old's mind--an 8-year-old who just discovered how to swear and can't wait to drop his newfound knowledge at dinnertime. Puerile profanity and sexual humor can be appealing, and games like South Park: The Stick of Truth and MadWorld revel in their own lewdness to great success. By contrast, Ninja Gaiden Z flings swearwords and bawdy imagery and wants you to laugh because, you know, vaginas are funny.

Player character Yaiba is clearly not meant to be liked as he pursues his revenge quest against archnemesis and usual Ninja Gaiden star Ryu Hayabusa, but then again, no one comes across as particularly interesting or charismatic--not one-note guide Miss Monday, whose primary character traits are her monumental breasts, and certainly not the composers of the game's compendium. Complaining of his wealthy boss, one author writes, "After six years of holding our dicks in our hands, finally that Spanish knobhead Del Gonzo authorized some action," and later enthuses over his rising "blood-boner." The alluring comic-book art style and initial gore are enough to inspire a momentary blood-boner, but sadly, the poor dialogue is not the game's biggest deficiency.

No, that honor belongs to the action itself, which furnishes just enough fun to make you wonder how developers Comcept and Spark Unlimited allowed it to go off the rails so often. As cyberninja Yaiba Kamikaze, you wade through cartoon zombie hordes using your sword, your flail, your metal fist, and every so often, a weapon that downed foes drop, like electrified nunchuks or a rocket launcher. When encounters are kept simple, the action is immensely shallow, but satisfying in a button-mashy kind of way, in which you press buttons and blood splatters all over your television screen.

My favorite standard weapon is the flail; using it gives the combat a God of War feel, and its long reach makes it useful for ripping through a large number of lurching zombies at once. The flail's appeal is not found just in its ability to create copious amounts of blood, but also in its mass trauma capabilities, allowing you to make numerous foes simultaneously vulnerable to a gory execution. Such executions can be chained together in quick succession, with you pulling a shoulder button when one execution pauses to move on to another. Not only is there some innate glee in seeing zombie heads fly into the air and undead bodies split in half at the torso, but performing executions rewards you with refreshing red cubes that replenish your health meter.

As much as Yaiba's flail recalls Kratos' blades of chaos, Ninja Gaiden Z more resembles 2010's Splatterhouse, not just in its cel-shaded look and sneering tone, but also in its absurd defects, which squash the fun and replace it with equal amounts of tedium and frustration. The irritations don't arise from one design element, but from a mass of them that make Ninja Gaiden Z feel less like a cohesive action game with a clear rhythm and flow, and more like a series of disconnected concepts that don't make any sense together.

Ninja Gaiden Z is crass and stupid but rarely funny. It's mean and dumb but never witty or subversive.

Many of these elements are fundamental, and thus substantial, even when they seem initially minor. The fixed camera is a frequent problem, sometimes forcing you to traverse areas and fight off unseeable enemies without giving you a proper view of your surroundings, and other times swooping around when you cross a threshold in the midst of combat, disrupting the tempo of combat as well as the viewable arc of the combat arena. It's even less fun when you begin one of many battles against a mechanical boss, in which its hulking metal body looms in the foreground, and you dash around behind it, hidden from view. You might even try dashing between its thundering legs, only to get caught up on an invisible collision box and be forced to take your lumps as you try to extricate your bruised body.

As if to mimic Ninja Gaiden's famously high level of difficulty, Ninja Gaiden Z fills the screen with hulks that fling fire, jilted brides that sizzle with electricity, and mutants that puke bile in your direction. But where games like Ninja Gaiden Black gift you with precise combat systems that reward skillful play, Ninja Gaiden Z takes the shallowest and cheapest approach to difficulty imaginable, throwing so many of these enemies into the arena that skill is barely relevant. Sparking enemies teleport to your side and slap you around while you're dashing about to snuff out the flames engulfing you; killer clowns knock you into submission when you're rushing away from suicidal grenadiers. Blocking and countering certain attacks is possible, but is rarely a viable tactic given how quickly and randomly this mess plays out onscreen.

Ninja Gaiden Z's so-called chemistry set exacerbates the frustration. When certain elements come in contact with each other--the biological spew of a blister sister and the flames of a holy roaster, for instance--they cause interactions. The chemistry set is functional enough when you use it to solve the game's mild puzzles, but the lightning storms that suddenly ignite on the battlefield when fire and lightning meet are more hazardous than the threats they alleviate. As a result, death is a frustration and not a teaching tool, and your primary method of healing--collecting post-execution health drops--is unreliable. The prompts to execute enemies might appear in the middle of one sword swing and vanish just as quickly when the second half of your combo rips the vulnerable enemy to shreds.

This is one of many examples of how Ninja Gaiden Z corrupts its most interesting mechanics with subpar detailing. Executions satisfy the primal urge to squish mutated baddies, but they're also gawky to watch, given how each chained execution is visually distinct rather than connected to the others. Performing a series of brutalities is more like viewing a series of incoherent three-second films than showing off your acrobatic expertise. Another of Ninja Gaiden Z's best assets--its scripted, high-flying parkour sequences--are similarly diminished. Stringing leaps, grapples, and punches like the world's most violent gymnast is an absolute blast; fumbling around with the finicky contextual jumps (indicated by a ledge splattered with blood) and camera angles that disrupt your sense of depth is not.

So much for that blood-boner, then, not that you'd be able to keep it up during the game's first major showdown, which drops to single-digit frame rates in the heat of battle. Still, Yaiba: Ninja Gaiden Z keeps pumping out the blood, hoping to turn you on with its gory combat and vulgar attitude. Every so often, 8-year-old me--the part of me that thinks that asking everyone what word starts with "f" and ends in "u-c-k" is funny--got a kick out of Yaiba's exploits. Most of the time, however, I could only wish that Ninja Gaiden Z's striking art style had been applied to a better canvas.

View Comments (298)
Back To Top
4
Poor
About GameSpot Reviews 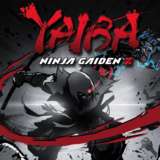 Kevin VanOrd loves Ninja Gaiden, bloody action, and crass humor, but Yaiba left him cold. He finished the campaign in about seven hours and spent about two hours squashing the undead in Arcade mode. If you're looking for some old-fashioned profanity and sexual imagery, he suggests playing MadWorld instead.