Let's be honest. If aliens were to invade right now, chances are pretty good humanity would have a tough time of it, but we might have a chance. In 1979, though? Before we had stealth fighters, before we had directed energy weapons, before supercomputers or the Internet as we know it today? We'd be crushed. Xenonauts places the future of Cold War-era humankind on your shoulders, and it's about as punishingly difficult as it should be given the setting. If the brain-melting strategy doesn't scare you away, you'll find a beautifully atmospheric game that evokes the purest dread and desperation.

Any discussion of Xenonauts must make a nod to its clear inspiration, X-COM. While I'd like to say that this is a spiritual sequel to 1994's X-COM: UFO Defense, it's a lot more accurate to say that it's more of a remake than even Firaxis' XCOM: Enemy Unknown. Xenonauts strikes a balance between large-scale, real-time global logistics and small-scale personnel tactics. You must capture and research alien technology in the dire hope that humanity can reverse-engineer weapons to match and ultimately exceed those of the invaders before it's too late. You may also name your squads after friends and family to make ckear the human costs of war. With these parallels, Xenonauts struggles to establish its own identity. There are only a handful of substantive differences between it and the games that preceded it, and while each difference adds a lot to the game, it's also impossible to shake the feeling that you've done this all before.

The war for Earth is pretty slow at first. The aliens you face hail from a planet with an extremely thin atmosphere, and they have to modify their ships before they can land. This minor narrative touch may seem insignificant, but it gives the early hours coherence by explaining the slow ramp-up in the enemy offensive. It's apparent that you're living on borrowed time. These visitors aren't friendly, and they have Earth surrounded.

Your main goal is to construct and maintain bases that monitor and guard as much of the world's airspace as possible, as well as to launch ground missions to recover alien technology or capture one alien leaders. And thus rises the multilayered strategy that links everything together. You need cash to run your bases, supply your troops, and keep the aliens from wiping out humanity. Missions help keep the international community happy, which keeps the money flowing. Every mechanic feeds into another, and a weak plan on one front can have a lot of critical repercussions. When starting up Xenonauts for the first time, I attempted to build two bases right off the bat. I wanted to secure a decent chunk of the planet and steadily expand from there. Unfortunately, founding and supplying two facilities rapidly drains your cash and keeps you from being able to carefully invest in the development of new, efficient weapons and tech for your soldiers and fighter jets. That doesn't mean it's impossible, but poorly conceived plans lead to humanity's doom.

It's immediately apparent that you're living on borrowed time.

Failing to protect some regions causes your program to steadily lose funding as those regions lose faith in the Xenonauts project. Because humanity as a whole is on the defensive, downing enemy aircraft is your bread and butter. You need to keep UFOs from bombing cities, abducting citizens, or straight-up attacking your bases. Initially, that's not a tall order. At first, only small craft like probes and corvettes can be modified to enter Earth's atmosphere. Intercepting them carries virtually no risk. You can have battles auto-resolve, with the game using basic aircraft statistics to determine the victor. If you prefer more direct interaction, you can play out the dogfights with a system that very closely resembles Cold War-era radar screens. Ships and planes are represented by green 2D sprites, and their firing arcs and weapon ranges are clearly displayed. If you're careful, manual dogfights can assist you in your path to victory. About midway through the game, I was lagging behind my fighter upgrades and couldn't keep up with the stronger, faster alien vessels, but I could still survive thanks to smart maneuvering. With a few careful clicks and some liberal use of my afterburners, I kept two of my jets in the aliens' blind spots and downed the ships before they could reach Dublin and initiate a wholesale slaughter.

When you can successfully scrap a UFO over land, you have a narrow window in which you can launch an automated airstrike to clear out all of the alien troops and pick up a moderate amount of cash, or you can choose to launch a ground mission. These have you organize landing squads to scavenge what alien tech you can and bring it back for future research. They also give your soldiers an opportunity to accumulate valuable battlefield experience, dramatically improving their stats over time. The surviving extraterrestrial troops and robots attempt to fight you off, making these missions dangerous propositions. The technological superiority of your foes makes itself readily apparent here; the extraterrestrial soldiers can immediately kill one of your soldiers if you're not extremely careful. Your weapons, and later your cheap imitations of the alien weapons, just aren't as effective. These ground missions help distinguish Xenonauts from its influences. Whereas XCOM: Enemy Unknown had small, tight levels that helped clearly identify threats, Xenonauts has sprawling levels with extremely limited visibility. Cover is also of limited use; in almost every case it can be destroyed with a few shots or a stray grenade. During night missions, your soldiers have severely limited visibility. The aliens, once again, have an advantage, with infrared vision. The result is an extremely lethal set of missions that help drive home the overwhelming danger posed by Earth's visitors.

During one excursion, with a squad of battle-hardened veterans, I caught myself screaming at my computer screen, begging them to stop succumbing to a previously unknown line of alien androids for just a few more turns. After the anger and panic subsided, I realized I had no one else to blame but myself for the loss. Yes, Xenonauts is lethal, but never unfairly so. The environments are almost completely destructible with the right gear, and once you've cleared an area of civilians, wanton destruction comes with almost no penalty. Xenonauts necessitates a metered ruthlessness, a barely contained thirst for devastation that you periodically release to ensure absolute dominance. This is ultimately the game's single best design decision. Xenonaut's gameplay ably complements its narrative. You aren't just told to feel desperate; you must take desperate measures to have any hope of victory.

Unfortunately, while Xenonauts creates a network of mutually reinforcing sections, it borrows too heavily from the 1994 X-COM in some not-so-flattering ways. The user interface can be obnoxious and obtuse. Even with an internal game manual, I didn't figure out that right-clicking and dragging would change which direction a soldier was facing until a few too many hours into my first run. Outfitting your squads with the gear and equipment they need can also be a pain. In addition, the game's uninspired visuals lack the panache of its more recent competitor, XCOM: Enemy Unknown, which magnified powerful attacks with its cinematic, over-the-shoulder camera. A similar brand of drama could have made Xenonauts' battles all the more thrilling, but the distant camera keeps the action at arm's length.

Xenonauts is an unlikely success, a challenging clone of a beloved classic with enough tweaks to entice fans and newcomers alike. It might look rather cheap at first glance, but underneath that rough exterior lies something special. Breaking the game down and looking at all of its pieces in isolation would do the game a disservice, because every facet helps focus the true luster of the whole. 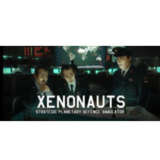 This is the third time Dan Starkey has used his strategic talents to collect and reverse-engineer alien technology to repel an invasion. He's gotten pretty good at it, but Xenonauts still claimed 61 hours of his life. They were well spent.