Like Xena? Stick to the TV show and put this one out to pasture.

Though the prerelease hype made it out to be a more action-oriented sort of Tomb Raider-style adventure game, Electronic Arts' Xena: Warrior Princess has much more in common with a 3D version of hack-and-slash titles like Golden Axe. Or, still more accurately, it's essentially like Eidos' Fighting Force with a sword.

Playing as the television series' title character, you must rescue your companion, Gabrielle, from a fate worse than death and fight the forces responsible for her capture in the first place. The game is played from a third-person perspective and revolves around slashing, jumping, and kicking your way through a series of 3D environments. Various button combinations produce special combo moves like those seen on the show, but since mashing the buttons alone appears to work well, you won't be inclined to learn the combinations. Xena can also use power-ups, which she'll find along the way, as well as her trademark chakram (that bladed Frisbee she's always chucking around). Once you throw the chakram, the perspective switches to that of the whirling circle, which you're able to aim, after a fashion. Once it hits something, it's propelled back. The downside to using it is that Xena is defenseless while the weapon is in the air, so you've got to use it wisely when you're under fire from archers perched up above or from multiple opponents on the ground. You use the chakram to flip switches, cut chains, and pick off opponents from a distance. These opponents sometimes become tougher targets because of the hostages they keep so near to them.

There are minor puzzle-solving and platform-jumping sections in Xena: Warrior Princess, but the game camera keeps both from being much fun. The camera has a mind of its own at times, swinging this way and that in some situations while taking too long to catch up to your character in others. On top of that, the controls that let you adjust the camera manually feel backward and the perspective shifts too slowly to be much use in tough situations. The camera system does some things right, though, like causing obstacles and even Xena herself to go translucent when they're in the way of the action. This is one of the few pluses concerning the game's graphics. The characters in X:WP all look very blocky, and the backgrounds are basic and sparse.

You'll fly easily through this title if you can find the motivation to attempt it, the hardest tasks being those set by working with the camera. There are a few points, such as battling the Cyclops on the beach, that break up the monotony of the hack-and-slash nature of the game, but they're exceptions, not the rule. Ultimately, X:WP feels as though its developers were focused so intently on making the title carry mass appeal that in the end, the result is a watered-down, thin, sorry state of a game barely deserving of a rental, let alone a purchase. Like Xena? Stick to the TV show and put this one out to pasture. 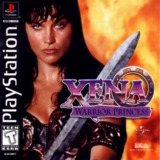