Einstein taught us that space is both homogeneous and isotropic--that is, on a large scale, the universe is smooth and uniform in all directions. It's empty out there. Like many space games before it, X Rebirth depicts an unrealistically vibrant universe bursting with color and texture, and that's as it should be. A near-vacuum makes a dreary backdrop for a video game, at least for a human observer.

It isn't X Rebirth's inauthentic view of space that should anger you; it's that this sequel is a galactic collision of unparalleled scale, an interstellar parade of bad ideas badly executed. Just as the observable universe has no center, neither does space exploration game X Rebirth find a foundation from which to grow outward, and I am unsure how to begin describing its failures. I can only begin at the quantum level, pulling out each particle and analyzing its deficiencies. And so I start in the cockpit, where most galactic adventures begin.

The Albion Skunk is the aptly named vessel that carries you on this journey. Unless you're peering out of a space port's window or piloting one of the game's different drones, you always see space through the Skunk's front window, and overlooking the aesthetically dull control panel that tells you the ship's condition. In fact, you look at most of X Rebirth's menus in the cockpit, each list pulling up on a digital display viewable by both you the player and protagonist pilot Ren Otani.

This menu integration might have been a sensible way to draw you further into this universe, but no amount of immersion would have been enough to veil the system's grave deficiencies. Pulling up so much as a simple galactic map requires a ridiculous number of keystrokes, with each submenu buffered by just enough input lag and unnecessary animation to cause impatience. Furthermore, the menu doesn't always take up a sensible portion of the screen, making it hard to read intricate mission objectives--and even harder to read them when a particularly garish spacescape shines from behind the Skunk's menu screen.

Garish spacescapes are common in X Rebirth, though there are sights of real beauty. Ships feature a remarkable amount of detail, and space stations and capital ships catch the eye with their intricate industrial designs. Rushing between systems via the game's space highways can be a visual delight, particularly as you watch ships and structures approach and then race by. When the color scheme embraces tranquil blues and developer Egosoft exercises visual restraint, the hazy background nebulae and tumbling asteroids are a treat. All too often, however, the view erupts with harsh orange and turquoise hues, making you wonder if you shouldn't stock the Albion Skunk with sunscreen. A vibrant vision of space is typically pleasing enough, but X Rebirth's depiction occasionally surpasses "meticulous" and surges straight into "gaudy."

Buy low and sell high. It's a solid economic policy, and it forms the backbone of X Rebirth's explore-fight-collect-build gameplay loop. It's an inviting loop, and I found myself pushing onward to collect enough funds, hiring enough ships to join my squad, and building enough structures in the hope of calling the result a true empire.

Sometimes, doing so means shooting spacecraft piloted by members of the slave-trading Plutarch Mining Corporation. Combat is functional, but ship controls are loose, though I never felt as though I wasn't properly directing the action. Regardless, the Skunk is your only ride for the duration, so get used to the way it looks and feels, though you can improve its performance with enhanced weaponry, shields, and so forth. Fortunately, you will build up an entire squad of vessels that perform various vital actions on your behalf, assisting you in combat, erecting structures, and ferrying goods about the sector. Massive battles are visually explosive, momentarily interrupting the slow-paced trading with fiery combat.

This sequel is a galactic collision of unparalleled scale, an interstellar parade of bad ideas badly executed.

And boy is trading slow-paced. Buying and selling goods isn't an immediate process, or even an efficient one. Instead, you must wait for many minutes on end as your sluggish trading ship edges ever closer to the trade port, giving you an opportunity to poke around the sector, or more likely, to go grab a glass of wine and peruse the latest issue of Science Magazine from cover to cover. You also must maintain fuel reserves, which can come as a shock the first time a hired pilot informs you of his fuel shortage over the comm and has you scrambling to figure out how to rectify the situation, given how ordering your ship to fuel up is not an option you can find in the game's menus.

Building up a fleet takes time and money, and you don't find capable crew members free-floating in space, but rather within space stations, which you explore on foot after docking. First-person exploration could have been a grand addition, taking the X series that much closer to the everything-and-the-kitchen-sink games developer Derek Smart wanted his Battlecruiser series to be, but never was. It soon becomes obvious, however, that traversing cookie-cutter stations sucks the mystery out of space travel, leaving behind horrifying human visages that spout absolute drivel in the most excruciating tone of voice imaginable. You see the same grotesquely scarred faces over and over again, and engaging one of these unblinking ghouls results in absolute nonsense. Any given conversation is utterly devoid of logic. Characters are routinely rude when you approach them, then become delighted, and then lapse into obnoxiousness again. In the meanwhile, female characters frequently whine "Ew! Slimy green lizard things are everywhere!" in the shrillest possible manner, as if they are 1950s housewives from classic cartoons, crying atop the kitchen table and swatting at pesky mice.

That line is shrieked in regard to the reptilian Teladi race, whose existence in the X universe is well established. Perhaps Egosoft wanted to use first-person exploration to further develop the game's tone and deepen its lore. Sadly, a universe full of rude, moronic space travelers barely capable of communicating normal thoughts in a logical order is not a compelling place to be.

Instead, having to dock at a station and walk around looking for the right merchants becomes a chore. My first foray into a station delighted me; I could loot lockers and crates for marketable items, leading me to believe that X Rebirth might spill into role-playing territory. Alas, clicking on lockers becomes monotonous busywork, as does roaming the cut-and-paste hallways looking for vendors and crew members for hire. These places are as lifeless as a white dwarf, even in their underpopulated lounges, each living statue stiffly waiting for you to click on it. Characters speak of their own accord only when prompting you to take part in a ridiculous-beyond-measure minigame in which you engage in surreal small talk to earn a few discounts. It wasn't long before I avoided this minigame altogether, however: no matter how deep the discount, I couldn't stomach the stupid dialogue, which made me question how such imbeciles could have devised any form of space travel.

It isn't just in the space stations where you go hunting for discounts. Out in the black beyond, you glimpse icons that urge you to investigate the objects they identify; examine enough of them, and you unlock discounts and side missions. Little lowercase i's are splattered all over the place, but you have to be close enough to see them, and you must have line of sight. And thus your adventure turns into a vapid Easter egg hunt in which you float around satellite arrays seeking icons, and then soar close enough to them to interact with them. It isn't uncommon to briefly see an icon identifying a side mission only to have it flicker away in a flash, forcing you to maneuver carefully around the starbase hoping to catch another glimpse.

Don't expect those missions to work properly once you graciously accept them from your sneering contacts, however. Each X game has suffered from a certain number of rough edges at launch, and you could be forgiven for assuming that like those games, X Rebirth would be superficially glitchy but eminently playable. Yet no matter how low your expectations might be for the newest X's stability, the game still manages to sink lower. Only a few hours in, and a mission proved impossible to complete, leading me to commiserate with other players suffering from the same game-ending bug in Internet forums. After downloading a saved game file from a helpful comrade, I continued my journey, only to have a side mission task me with destroying a story-critical capital ship, leaving me to wander for hours wondering why I couldn't find my mission objective.

A universe full of rude, moronic space travelers barely capable of communicating normal thoughts in a logical order is not a compelling place to be.

Listing all of the bugs I encountered would take up inordinate amounts of space, and so I offer here a random array. Crashes too numerous to count. Poor frame rates that had me wondering why I'd spent so much money on modern computer hardware. Suddenly unresponsive dialogue that left me stuck mid-conversation. Enemy ships flying around in the middle of space station geometry, keeping me from completing missions. Trading ships that simply wouldn't conduct the assigned transaction. That last one was particularly aggravating, considering how much time you must wait for functional transactions to complete. All too often, X Rebirth had me asking the age-old question: "Is it a bug or a feature?"

The fact that it's too difficult to tell the difference tells you all you must know about X Rebirth. You might assume a bright future for the game, given Egosoft's solid history of supporting its games after release--and given the community's dedication to crafting fixes and modifications that further improve these starry treks. X Rebirth's failings are rooted too deeply to simply be patched away, however. No matter what your level of enthusiasm for the X series is, do your best to escape the pull of Rebirth's gravity. It's only bound to cause a fatal crash.

View Comments (155)
Back To Top
2
Terrible
About GameSpot Reviews 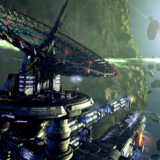 Kevin VanOrd is a longtime X series lover, and longingly recalls the days when space games were common. His favorite X game remains X2: The Threat, though his favorite space game of all time is the original Homeworld. He played about 40 hours of X Rebirth for the purposes of this review.