X-Men faithfuls, beat-'em-up lovers, and casual gamers will enjoy the invitingly easy fisticuffs that X-Men: Reign of Apocalypse has to offer.

On their return home from the Mojoverse, the X-Men find themselves sucked into a parallel dimension where Apocalypse is king. Now Cyclops, Storm, Wolverine, and Rogue must battle their way deep into sentinel territory to topple Apocalypse and find their way back home. As a side-scrolling beat-'em-up, Activision's X-Men: Reign of Apocalypse isn't just an excuse to pit the X-Men against some of their closest friends. It's also direct competition for Capcom's recent release of Final Fight One.

How does Reign of Apocalypse stack up against the genre-defining Final Fight One? Pretty well actually. The large X-Men characters are colorfully drawn and well animated, while the many, many sentinels and Alpha Flight members provide abundant opposition. Thrown into the mix, 16 ultrabutch bosses stand in the X-Men's way, including such notables as The Blob, Cable, Magneto, and Colossus. In addition to the comic-inspired speech bubbles, each of the game's 12 locations, be it Xavier's mansion, the Golden Gate Bridge, or a hidden moon base, contains plenty of ambience ripped straight out of a number of Marvel Comics comic books.

X-Men: Reign of Apocalypse also scores major points for supporting two-player simultaneous gameplay and for having a battery-backed character upgrade system. As you walk through each level pummeling Apocalypse's armies, you'll earn points to enhance your character's strength, vitality, and mutant power capabilities. Attacks are limited to the standard array of punches, throws, and special attacks common to the beat-'em-up genre--albeit with an X-Men twist. A constantly growing power meter lets you perform a vicious mutant attack once or twice per round that can clear multiple opponents. In later stages, there are usually five or six enemies onscreen at a time, but an abundance of health and mutant power items more than tips the scales--especially with two players.

If there is any major complaint to levy against Activision's latest X title, it's just that the whole presentation is too similar to a variety of games you've no doubt seen before--Final Fight, Rival Turf, Guardian Heroes, Cannon Spike, Captain Commando, and Streets of Rage to name just a few. Sure, it may only be the GBA's second such beat-'em-up, but that's no excuse for cookie-cutter goons, painfully looped music, simplistic sound samples, and prehistoric gameplay. The single-screen end sequence is somewhat disappointing also.

X-Men faithfuls, beat-'em-up lovers, and casual gamers will enjoy the invitingly easy fisticuffs that X-Men: Reign of Apocalypse has to offer. However, for those who want a bit of depth to their fighting, it may be too limited. In all fairness, though, the game's similarity to Konami's 1992 X-Men arcade game also gives it a nostalgic lure. 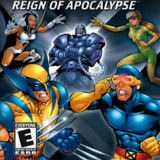