X-Men Legends is a great action RPG that packs in some strong action with a well-told story.

When it comes to the world of video games, the mutant fighting force known as the X-Men are probably best known for their work in fighting games. More specifically, the X-Men are best known for their work in Capcom's fighting games, which turned the eye-beam-firing Cyclops into a Ryu-like fighter, complete with a dragon punch. While the X-Men have occasionally crept into other genres, the results are usually less than favorable. X-Men Legends, however, packs in a good number of different playable characters and great-looking graphics into an easy, but fairly lengthy adventure. It all combines to form a great action RPG with strong action and a well-told story.

Though you're usually free to form a four-man team using any of the X-Men, the game's story is mostly told from the perspective of a new mutant. Make that New Mutant. Magma, who first appeared in New Mutants #8, is a new addition to the X-Men team. The game reworks the character's origins a bit, but to make a long and occasionally convoluted comic book story short, you'll start the game as Wolverine, and you'll be tasked with rescuing young Magma from members of the Brotherhood of Mutants, Magneto's gang of freakish thugs. What starts out as a simple rescue and indoctrination into Professor X's mutant school eventually grows in scope, of course, until the fate of humanity swings in the balance.

X-Men Legends is an action RPG that falls into the same category as games like Baldur's Gate: Dark Alliance and Champions of Norrath. The game has some RPG-style number-crunching, but most of the focus is on running around and beating the snot out of a variety of foes. You'll select a team of up to four X-Men from a roster that includes Cyclops, Wolverine, Iceman, Beast, Jean Gray, Colossus, Emma Frost, Psylocke, Jubilee, Nightcrawler, Gambit, and more. Magma will also eventually join your team, thus making her available for field missions.

The gameplay in X-Men Legends is easy to pick up. You have two attack buttons, and these standard melee attacks can be strung together to form combos. There's a pop-up combo to knock enemies into the air; there's one that knocks them down; and there's one that stuns them. Additionally, there's one that is simply longer and more damaging than the rest, so you'll probably rely on this one throughout the game. You're dropped into enemy-filled environments and charged with various tasks, which are plainly marked on your map. So while you might be looking for sentinel parts or trapped mutants, the act of getting there is almost always identical, and your interaction with mission objectives doesn't usually advance beyond pressing a button. The game throws a lot of enemies at you at every turn, but there's usually plenty of time to regroup after a battle to heal up, if necessary. Between the game's long, damaging combo attacks and its abundance of healing items, play rarely becomes difficult, provided you enter each situation carefully and, well, provided that the game's occasionally boneheaded artificial intelligence--which has a bad habit of blocking doorways and which doesn't seem to know how to retreat to heal in the middle of a battle--doesn't get in your way.

The game's missions vary in length. Some of them may take a couple of hours to complete, while others are significantly shorter. Aside from taking on missions to thwart Magneto's plans, the game also has some levels that put you in the X-Mansion as young Magma. This lets you explore so that you can occasionally find X-Men to chat with about recent goings-on, and it also gives you access to things like concept art and other extras. Exploring the mansion is a cool way to give the game a little extra depth. Talking with X-Men will occasionally grant you access to flashback missions, and these let you take a few X-Men out in their classic costumes. You can also head off to the Danger Room to practice your skills, which can definitely be a good way to earn experience points.

Experience points are earned by defeating enemies and by completing objectives. While you'll only have up to four X-Men in combat at once, the experience you earn is shared by all X-Men. This prevents you from having to level up weaker characters, since your entire pool of available characters will all have roughly the same growth throughout the game. Even the flashback missions and Danger Room experiences count toward advancing all of your characters. Gaining a level in X-Men Legends lets you add a point or two to any of four stats that govern your offense, defense, health, and energy, which serves as the game's mana equivalent. You'll also earn points to spend on your characters' powers. Each character has four different mutant abilities. The moves usually break down into two combat maneuvers, one temporary stat-boost move, and a final "xtreme" power that can only be unlocked when you reach level 15. This xtreme power can only be used after you collect enough xtreme icons to fill one segment on a five-bar meter. Wolverine, for example, has one very powerful slash attack, one that involves executing multiple swipes, an enraged state power that gives him a stat boost, and an xtreme power that makes him bounce from enemy to enemy in a ferocious final attack. Cyclops has his optic blast, a wider-arc optic sweep, which also has the ability to knock opponents away, a "leadership" move that raises a few key stats, and a gigantic optic beam that can clear a room--if used properly. Though the powers are similar between characters, there's still some fun to be had in finding out which four fighters are right for you.

There are more powers to upgrade than just your four, standard mutant abilities. You can also spend points in other categories, which will do things like increase a character's melee damage, raise his or her maximum energy, add bonus experience points for properly executed combos, and, for Wolverine, a power that makes his ability to regenerate health more effective.

Though you're free to select any four X-Men (in most cases), and you're certainly able to play as any of these four X-Men at any time by pushing a direction on the D pad, most of the game seems to be built for having you play as a melee character while you let your computer-controlled team members back you up with projectiles. This means that you'll probably be spending most of your time playing as Wolverine, since his health will automatically regenerate and nullify any damage you take during a battle. But as time goes on, Wolverine's standard melee damage is eclipsed by some of the other characters, so you might find yourself punching and kicking with someone like Magma or Iceman for the game's final stretch. Since other characters can't regenerate health like Wolverine does, you'll have to rely on health potions, which, along with energy boosters that can quickly refill your mutant power meter, are literally everywhere. In the rare event that you run out of health potions, you can purchase more at save points.

All of these health items make X-Men Legends a pretty easy game, but it makes up for that ease by presenting a reasonably long storyline. It'll take most players around 20 hours to reach the conclusion, though some of the flashback missions are optional, so that number can grow or shrink a bit. The game gains some replayability with some cool, though underdeveloped, multiplayer options. At any time during your single-player adventure, you can plug in additional controllers to allow four people to play at once. If one decides to stop playing, you can disable that controller and return that one (or more, as the case may be) character to AI control. Because some missions have you flying solo or with fewer than four characters, this mode feels a little tacked-on, especially since this means that some players will be left waiting for a full-party mission to rejoin the game. However, it is a neat addition, even though online multiplayer and a random mission generator would have probably made for a more interesting multiplayer experience.

Aside from cooperative play, the game also lets you enter a separate multiplayer mode where you can skirmish against either AI-controlled characters or other players. Here you'll be able to unlock and play as many of the game's enemies as well as your X-Men, giving you the chance to play as Juggernaut, Havok, Marrow, Mystique, Pyro, Sabretooth, a variety of sentinels, and a mess of enemy soldiers. Again, this mode isn't as fully developed as you'd probably like, because more care was given to making the X-Men playable than the rest of the game's characters. It's still an interesting addition, though.

Graphically, X-Men Legends has a pretty interesting look. The game's characters are cel-shaded, while the environments are not. This does a good job of making the players stand out from their backgrounds. The environments are fairly detailed and can often be destroyed in some pretty satisfying ways. The character models are usually seen from a distance, but it's always easy to tell the characters apart. As with many third-party games, X-Men Legends will appear on all three console platforms. The expected differences hold true here, as the Xbox version looks and sounds cleaner than the other two, though the GameCube is a very close second. The PlayStation 2 version also has longer load times than the other two versions. The game controls just as well on the Xbox, PlayStation 2, and GameCube, so it's roughly identical where it truly counts.

X-Men Legends has a lot of voice acting, but it still doesn't have enough. Basically, anytime there are lines that can only be delivered by one character, the line is spoken. But since most of the game's missions let you drop in any team members you wish, the game doesn't know which characters will need to speak. So rather than record every single possible character combination for all of the in-mission dialogue, the lines are text-only. While this represents an understandable omission, the absence of dialogue also sticks out. The rest of the game's audio is generally pretty good. Most of the sound effects are totally appropriate. The game's music will swell and fade as the action switches from fighting to exploration and back again, which is nice. However, since you usually only spend a few seconds between fights, this means that just as the music is fading to a lower level, the rock guitars have to kick right back in to signify that there are enemies nearby.

All in all, X-Men Legends does a good job with the comic license, so fans--be they casual or otherwise--will probably enjoy the game's attention to detail. The gameplay, while perhaps a bit easier than it should be, is also great. Finally, it also does a good job with the standard action RPG formula that was popularized by games like Dark Alliance. But most importantly, it's an entertaining game with a story that you'll want to see through to its conclusion. 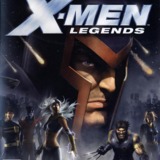