In X-Men: Destiny, mindless combat and meaningless choices combine to create a new mutation of boredom.

What good are mutant superpowers without exciting reasons to use them? As X-Men: Destiny proves, they're no good at all. In this superhero beat-'em-up, clobbering swarms of stupid bad guys with your newfound abilities is tedious, and although a constant supply of choices tries to convince you that your actions have real impact on this tumultuous world, they don't have much impact at all. Destiny does the incredible: it makes being a genetic marvel a generic bore.

It's a grim new era for the mutants. Professor X is dead, and anti-mutant sentiment is running high. You choose one of three characters, each with his or her own backstory. Whomever you choose, your mutant powers awaken when a mutant-human peace rally in San Francisco is attacked by anti-mutant thugs called purifiers. As you come to terms with your powers, you're given many choices that let you align yourself more with Cyclops and the X-Men or with Magneto and the Brotherhood. But these choices have almost no impact on the course of the game. You can make Brotherhood choices straight down the line and still end up fighting Magneto and Juggernaut in a boss battle. Aligning yourself with the X-Men from the get-go won't get you out of fighting Wolverine at one point. You go through the same levels, fighting the same bosses, with the same mutants often lending you assistance. Some games give you real choice. Some create a convincing illusion of choice. X-Men: Destiny just drops a bunch of meaningless choices in your path. The whole story feels sloppily thrown together, and unskippable dialogue sequences with spoken language that often doesn't match the subtitles only contribute to that feeling.

You choose what type of power you want from three options: energy projection, shadow matter, and density control. But like the story choices you make, this decision has little real impact. You spend most of your time fighting swarms of mindless purifier thugs, and mashing the buttons is all it takes to clobber these buffoons regardless of which power you choose. Combat doesn't get much more dull and shallow than this. You also battle the occasional machine-gunning robot or goon with a rocket launcher, but their predictable behavior makes it easy to defeat them as well. As you progress, you're presented with the occasional choice between one of two new powers to unlock. You might have to choose, for instance, between the ability to erect a barricade of obsidian or to cause an earthquake by slamming the ground. Acquiring these new abilities makes dealing with the purifiers even easier, and there's some fun in unleashing your powers and laying waste to several bad guys at once. But the combat never rises above monotony.

Boss fights aren't much better. You might expect Gambit to fight with grace and skill, for instance, but here, he is an idiot, attacking the empty air and giving you plenty of time to approach him from behind and safely attack him. The bosses adhere to simple patterns, and once you have these figured out, there's no excitement in fighting them, or sense of triumph in defeating them. You frequently fight alongside famous mutants as well as against them, but your AI partners often embarrass themselves, running up against walls or getting themselves stuck in the geometry. This is indeed one of the darkest hours the mutants have ever faced.

You can customize your character by equipping various suits and offensive, defensive, and utility genes that you collect. Equip Pyro's offensive gene, and your attacks do burn damage. Equip Iceman's defensive gene, and your body can turn to solid ice. If you collect and equip the same character's suit, offensive, defensive, and utility genes, you gain access to an X-Mode. Wolverine's X-Mode increases your attack speed and regenerates health; Colossus' turns your body to steel, protecting you from attacks and granting you super strength. This concept of swapping genes in and out at will actually works against the game. Instead of your character having a strong sense of identity, he or she just seems like an amorphous combination of the attributes of other mutants.

When you're not fighting, you make your way through the ruins of San Francisco. Traversing this environment as a superhero should be fun, but there's no joy in movement in X-Men: Destiny. The levels are restrictive areas that direct you from one location to the next, with piles of rubble and other unconvincing obstacles blocking your attempts at exploration. Shiny railings indicate things you need to climb on to progress, and the complete lack of freedom makes you feel less like a powerful mutant and more like a rat in a maze, being shuffled from one dull battle to another.

On top of it all, Destiny is an ugly game. The simple character models and muddy textures make it look like it was made several years ago, and the unattractive effects that accompany your powers make them feel underwhelming. You can breeze through this adventure in under six hours, but the gameplay is so shallow that you won't be left wanting more, and because your choices have so little impact, there's no compelling reason to revisit the game once you're done. In fact, it's not even absorbing the first time through. If mindless combat is all super mutants have to look forward to, you're better off letting your mutant powers remain dormant. 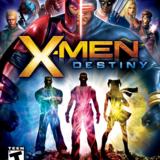