This is a scaled-down, greatly simplified version of the original.

Before you get too excited about the prospect of playing MicroProse's classic turn-based game by e-mail, you should know that this is a scaled-down, greatly simplified version of the original. The strategic and role-playing aspects are missing, as well as the variety of weapons. They have been stripped away in favor of a tactical game suitable for quick and easy e-mail play.

That's not to say this incarnation of X-COM can't be a pleasant diversion if you're looking for simple two-player gaming via the Internet that doesn't depend on how fast you click a mouse or how well you use a joystick. Hasbro Interactive makes playing by e-mail so easy almost anyone who understands how to send and receive a message can get into it.

In addition, the system requirements for the game are low enough that even those with a fairly fast 486 can join in the fun, as long as they have access to the Internet and an e-mail program capable of handling file attachments. And even without Internet access, you can still play the game on a single computer in "hot seat" mode, which is a good way to practice.

You'll notice the creepy music that gave X-COM its atmosphere is missing. In fact, there are no music tracks or cutscenes whatsoever in the game. The only sound effects are of aliens and humans walking, getting hit, and dying; weapons firing; and objects exploding.

You can play as either the aliens or as the human X-COM force, which has the mission of stopping the alien invasion of Earth. There are six different unit types for each side, each with different health and movement points and attack capabilities. The aliens have chryssalids, snakemen, sectopods, mutons, sectoids, and ethereals. The X-COM force has rookies, squadies, sergeants, captains, colonels, and commanders. The primary differences between these units are their armament, health, movement points, and leadership capabilities.

X-COM players will recognize most of the weapons available. They include pistols, rifles, autocannons, and rocket launchers. As in the original game, some alien units have psionic attacks that can cause humans to go out of control. Learning how to use the weapons and the units to their maximum capabilities while outmaneuvering your opponent is the challenge.

Giving orders is a straightforward process. Units can either move, fire, or move and fire. Some units with heavy weapons have the choice of moving or firing, but not both. A unit that moves and fires cannot move as far or fire as accurately as a unit that only moves or only fires.

There are five different settings, ranging from close urban terrain to more open areas around spaceships, and each setting has ten different maps. The number of units per side can be as few as four or as many as six, but the sides are always equal. Because the number of units and power-ups, as well as their placement on the map, varies with each mission, two missions should not play the same way twice. It just seems like they do.

Two other major differences from the original X-COM are that each mission takes place on a single full-screen map and that there are power-ups scattered about. Some of the power-ups provide grenades and mines, others can improve health or increase firepower, and others have negative effects, such as exploding when picked up, trapping a unit in place, or instantly teleporting a unit to another part of the map.

The power-ups are located in crates, boxes, and barrels that must be blasted open. Without moving a unit into the square with an item, there's no way to know whether it will have a positive or negative effect. Unfortunately, this trial-and-error approach can quickly unbalance a game when a powerful unit steps on a mine early in a mission.

To play by e-mail, one person gets online and starts a game by choosing a map and the side he wants to play. After giving orders, the player clicks on the "send" button, which automatically opens windows to provide information about each player's name and e-mail address. Once that information is filled in, the turn is automatically sent as a file attachment to an e-mail message, and then you see the results of the turn.

The player receiving the e-mail can either open the file attachment or find the directory where it's stored and double-click on the file to open it. This player then sees what happened during the first player's turn and gives his own orders. Once the player finishes, he clicks on the "send" button to send the turn back. This process is repeated until one side eliminates the other.

Those who enjoyed the original X-COM or its sequels probably won't find the e-mail version of the game interesting enough to hold their attention long. There's just too much missing to capture the mood and personality of the first game. However, for someone looking for a simple, tactical-level game to play online, email X-COM provides an easy, nonthreatening solution. 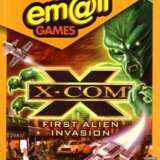 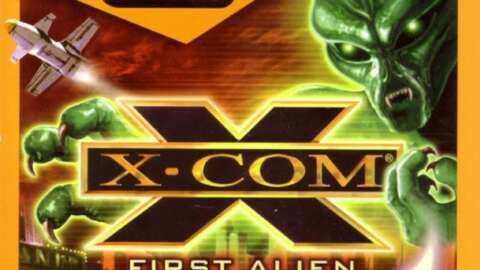 This is a scaled-down, greatly simplified version of the original.