THQ has been making WCW-licensed wrestling games for years. But a licensing shake-up has enabled the company to score the coveted WWF license that Acclaim held for years. THQ has a tremendous opportunity here to try something new with the license, and from the looks of the company's upcoming PlayStation title, WWF Smackdown, we may see something new yet. However, the company's first product, WWF Wrestlemania 2000 for the N64, is little more than a slightly upgraded version of WCW/NWO Revenge with a new set of wrestlers. So wrestling fans who are waiting for an all-new experience will have to keep on waiting. But WWF fans who skipped THQ's WCW games purely because of its license will be in for a game that plays well but captures only fleeting bits of the "attitude" that makes the WWF so popular.

Additions to the engine include a sitting position for fallen enemies. You can pick wrestlers up off the mat and place them in a sitting position, or you can pick them up and put them on their feet. An in-depth create-a-wrestler mode has been added. But unlike WWF Attitude, the depth isn't found in how many different colors of pants you can put on your wrestler or how many different types of mullets you can slap onto your wrestler's head; rather, the draw here is that you can customize every single move. Want up and the A button from a weak grapple to be a backhand slap? Go for it. Want your wrestler to finish other wrestlers with the "Insider's Edge," a rip-off of Scott Hall's Outsider's Edge? It's all you. A few other WCW finishers and taunts have made it into the game as well, so you can slap Scott Steiner's or DDP's taunt onto your wrestler if you so desire. Portions of the ring entrance walk are also customizable, as are things like ring entrance attire (hats, microphones, and water bottles are all available). You can set who your wrestler's rivals are, whom he walks to the ring with, how he reacts when and if he starts bleeding during a fight, and lots more.

Digitized music and stills from the superstars' video packages pepper the ring entrances, but both manage to detract from the experience rather than add to it. In theory, they make the introsmuch closer to reality than WCW/NWO Revenge's weak intros, but the quality of the entrance music is abysmal. Imagine a friend calling you up and playing entrance music over the phone - or perhaps a RealAudio file encoded at the lowest possible setting - and you'll be on the right track. The entrance "video" is similarly pathetic. It's a collage of still shots taken from the video intros, but the shots are taken at a very low resolution and blown up to fill the entire screen. It's a blocky, pixilated mess. You would think the developers would have splurged for a larger cart to make room for some higher-quality audio and video in the game. At least the wrestlers actually walking to the ring look better than those in Revenge did. Wrestlers come down the aisle with their managers, valets, or other companions. So, to answer the burning question, yes, Godfather comes to the ring with one of his hos.If you've played Revenge, you already know exactly what to expect from Wrestlemania 2000. The game still uses the same grapple system, though it's a bit more reversal-friendly. The game is very easy to pick up and learn, but it takes a sense of timing to excel at the game. This makes it a wonderful multiplayer game. Playing alone, you'll be able to embark on the Road to Wrestlemania, the game's quest mode. Here, you'll pick a wrestler and his partner and fight your way through various WWF television shows, including Raw, Heat, and pay-per-views. You'll be booked into all sorts of different matches, and if you seem to excel in tag-team matches with your preselected partner, you'll be thrown into more of those. Other modes include king of the ring, three-way match, royal rumble, tag-team match, and cage match. Tossing the huge cage into the mix causes a bit of slowdown, and the cage looks a little strange up close, but it's still a welcome addition. You can also create your own pay-per-view shows and belts. Belt creation is a neat idea, but since the wrestlers never actually wear the created belts, you're limited to looking at a way-too-blurry picture of a belt before the match begins.

Along with from the previously mentioned terrible digitized ring entrance music, the rest of the sound is really quite bad. The weak MIDI tracks that made up Revenge's entire soundtrack have returned, playing on menu screens and during matches. There's no speech or commentary in the game whatsoever. The sounds of people hitting each other and people bouncing off the mat sound pretty good, but this goodness is overshadowed by the rest of the game's weak sound. Graphically, the game improves upon Revenge, but the models are still blocky, and the textures used for faces, while more realistic than those in Revenge, just look weird. It's really strange to see The Rock's face frozen in the raised-eyebrow position while he wrestles. Also, most of the wrestlers' heads are a little too square. The crowd is a collection of flat, sign-waving lunatics that get extremely tiresome after only a few minutes.

WWF Wrestlemania 2000 does a lot of things right. It's got some good gameplay, though it may be a bit too simplistic for some. It improves on THQ's last N64 wrestling game by quite a lot, especially with the addition of a good create-a-wrestler mode. But the terrible sound, only passable graphics, and general lack of originality keep this title from reaching greatness. This engine has delivered some good games, but I think it's definitely time for an all-new engine. 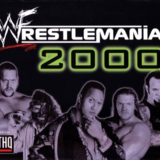 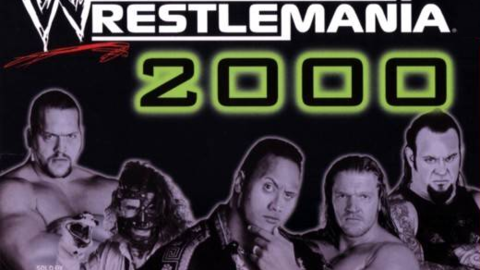