Smackdown vs. Raw is showing its age, but there's plenty of fight left in this old superstar.

The Smackdown vs. Raw series has been around for more than a few years now, and like a time-worn WWE superstar, it is starting to get creaky in its old age. The core mechanics that fuel the entertaining action still set the stage for some great fights, but the perennially problematic collision detection and finicky positioning mechanics are taking their toll. The new modes and refinements in Smackdown vs. Raw 2011 are more focused on setting up matches than landing gut punches, which makes the game feel more like a meddling manager than a reigning champion. Yet though the series may be getting long in the tooth, there's still enough action to satiate those with a penchant for powerbombs.

One of Smackdown vs. Raw's strengths is that it gives you the freedom to stage a huge variety of matches. 2011 offers more ways to tweak your showdowns than ever, with new locations and expanded match creation options. Whether you're setting your favorite superstar up to take on his archrival in an extreme rules match, or taking on a few friends in a Hell in a Cell diva showdown, it's fun to set the stage and then fight your way through a contest of your own devising. Furthermore, almost every match you play gets roped into the new Universe mode. This mode sets everything within the context of the WWE television schedule, including regular shows and marquee monthly events. You can play or simulate the matches that the game sets up or tweak the parameters to structure events to your liking. Matches that you play outside of Universe mode get slotted into the schedule, and the game often interjects melodramatic cutscenes and surprise events. Universe mode creates an enjoyable sense of continuity, but on the whole, it is little more than a new structure for the same familiar action.

The sheer number of moves you can pull off in the wide variety of different match situations is still very impressive. Knowing your wrestler's arsenal and maneuvering your opponent into just the right situation for a devastating attack is definitely satisfying. There have also been some refinements made to the core mechanics this year, particularly in matches that involve environmental elements like ladders and tables, resulting in some more realistic and more impactful falls. Unfortunately, the problems with the underlying physics system still linger. Collision detection remains a problem that can cause your strikes and grapples to go awry at frustrating moments, and this issue becomes even more problematic when there are more than two wrestlers in the ring. Learning to execute a wide variety of moves isn't enough; you have to know when the game will let you execute them. It may be unrealistic to expect to be able to perform any basic move at any time, but you should merely have to learn the rules--not the rules and the flaws. This has been the case with Smackdown vs. Raw for years, and while it is certainly possible to have a lot of fun fighting both AI and human opponents, these flaws still put a damper on the excitement. The sound effects further lessen the thrill of competing on the WWE stage, making a flying leap from the top turnbuckle sound about as intense as a door slammed by someone who is mildly annoyed.

The Road to Wrestlemania mode returns with five different individual storylines for you to follow. Each is packed with the WWE's signature melodrama, and you can now make choices throughout the story that influence how it all plays out. This mode also features new sections that put you in control of your wrestler from a behind-the-character third-person perspective. You can roam around a small backstage area where you can talk to other wrestlers, pick fights, and visit the trainer to cash in your experience points for attribute improvements. It's nice to have some autonomy as you make your way toward Wrestlemania, and the stories can take more than a few hours to complete.

You can also craft stories of your own in the enhanced story designer. Improved menus, a new tutorial, expanded options, and the ability to create branching paths make the second iteration of this feature even better. The rest of the creation tools are still very impressive, and you can easily lose hours making your own superstars, finishers, entrance videos, highlight reels, and move sets. You can also enjoy the fruits of other players' labors by browsing and downloading content from the online community creations hub. Competitive multiplayer has more options than before, but even the new stuff is plagued by old issues. In addition to one-off matches that can now include up to six players, Royal Rumble has joined the ranks of online competition. While the sheer size and intensity of Royal Rumble makes it an appealing addition, connectivity issues can make it tough to actually get into a match. Once you are in the ring, nagging lag can cause serious problems, especially during crucial struggles on the ropes. Given that only 12 players can enter the 30-man Royal Rumble, getting eliminated might not mean you are out of the action for good. You can be randomly assigned to an incoming AI wrestler, and idle players can try to predict who the next player to enter or exit will be in order to win some bonus points. A new online experience system tracks your persistent rank and lets others know how often you have won, lost, or quit matches. Though lag and occasional bugs may force you to quit and besmirch your reputation, there is no shortage of formidable online opponents waiting to test your skills in the ring.

Though the online arena can be both enjoyably tough and frustratingly flawed, it's fun to have access to a wide range of creative output. Those who buy the game new receive a code that grants them access to all the online features, while those who buy the game used have to pay extra for the privilege. All told, Smackdown vs. Raw 2011 delivers the same solid action, extensive customization options, and robust creation tools that the series has been providing for years, making it one of the best wrestling games around. There are some improvements and some new elements, but the core action of the game remains largely the same, and the perennial problems are still present. Those hoping for something more exciting than last year's fare are going to be disappointed, but if you're hungering for a fresh serving of ways to explore the world of sports entertainment, then Smackdown vs. Raw 2011 delivers. 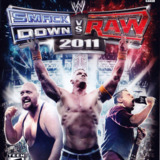