SmackDown vs. Raw 2009 successfully returns to the fundamentals of realistic WWE action and impressive creation tools.

In the WWE, it's not uncommon for seemingly vanquished superstars to return at random, handing out fresh beatdowns and earning back their former glory. After a disappointing showing last year, THQ's long-running SmackDown vs. Raw series has returned to the ring, having spent the year slimming down and focusing on its core strengths. The work has paid off: a lot of extraneous elements have been removed, the creation toolset is better than ever, and there are two modes that offer satisfying single-player arcs. Though it is still hampered by a number of lingering issues, WWE SmackDown vs. Raw 2009 manages to recapture some of the glory of its younger years.

The most notable improvements are in the single-player realm. The lackluster 24/7 mode has been ditched in favor of a lengthy Career mode and the scripted Road to Wrestlemania. In the Career mode, you choose a superstar (existing or created) and enter a bracket to make a bid for the title belt. Each bracket has five opponents including the current champion, and you'll have to earn stars by winning matches in order to get a shot at the title. You win up to five stars for each match by earning points in three areas: match results, technical, and excitement. These categories encourage you to get into the WWE superstar mindset by rewarding you for both pummeling and mocking your opponent. At the end of each match your attributes will increase and your health will replenish based on how the match went--no micromanagement here. You'll also earn amusing awards for things like striking your opponent 35 times or breaking a barbed-wire-wrapped plank over his or her back. It only takes a handful of successful matches to earn you a title shot, which is great because it keeps your career moving along at a good clip. This action-packed Career mode is the perfect complement to the Create A Superstar mode, and winning belt after belt as you bulk up your created character is satisfying and fun.

The other single-player mode, Road to Wrestlemania, features six unique story arcs that let you play as WWE superstars like The Undertaker or John Cena and defeat numerous foes (and a few nemeses) on your quest for Wrestlemania glory. Matches are interspersed with story scenes packed with typical WWE action and voiced by actual WWE superstars, so fans of outrageous melodrama will be well pleased. In keeping with traditional SmackDown vs. Raw strengths, the superstar models, entrances, and arenas are all excellent. While the character animations are good (despite occasional clipping problems), the wrestlers still lack fluidity when maneuvering around the ring. This feels like a result of staying too true to the source material: though WWE wrestlers do often move slowly, it's not very exciting to actually plod around the ring in a video game. The audio only further detracts from the excitement factor. Four-hundred-pound men hit the mat with all the impact of a child shutting a car door, and the strongest punches sound like a raw chicken breast being dropped on the floor. It dampens the supposedly hard-hitting action, and while the once-dismal announcers from years past have been improved quite a bit, the sound design is in serious need of a shot in the arm.

Despite how it may sound, the action is indeed hard-hitting. It's easy to perform powerful moves using the analog stick and a few buttons, and the breadth of things you can do in and out of the ring is impressive. From removing the turnbuckle cover to slamming your opponent through a burning table, there's no shortage of satisfying ways to deal damage. Specific match types have their own nasty additions, from rubbing your opponent's face against the elimination chamber to the powerful hot tag, which allows a tag team partner to build up momentum so that, when tagged in, he or she will get the quicktime chance to unleash two unblockable attacks followed by a finisher. Enabling such a wide variety of moves is one of SmackDown vs. Raw 2009's chief strengths. Like previous games in the series, it too relies on relative position to increase your repertoire, and your wrestler is still prone to miscues as a result. However, missing a move because you aren't quite in the correct position is less frustrating than missing one because your opponent is in an uninterruptible animation. This usually crops up in matches with three or more players, when one player is performing a move on another. In these realistic-to-a-fault situations you get a good feeling for just how exciting it is to stand passively aside while other wrestlers battle it out.

In addition to the Career and Road to Wrestlemania modes, the competent AI and unique wrestler abilities make playing single-player much more appealing in SmackDown vs. Raw 2009. No longer content to stand around drooling, computer opponents will actively attack you, tag their partners (you included), and use environmental elements reasonably well. Though the Road to Wrestlemania and early stages of the Career mode will seem easy to experienced players, it won't feel like you're playing against brainless apes. Last year's fighting style system has been removed, and in its place are unique wrestler abilities that existing superstars have and created superstars can earn. The effects range from attribute boosts (able to remove belt in ladder match faster) to enhanced abilities (can regenerate a small amount of health). While these abilities aren't particularly powerful, they can come in handy during tight matches.

While you might not have tight matches against the computer, you are sure to find tough competition online. You can use SmackDown, Raw, ECW or created superstars as you face off in ranked or unranked play in any of the match types that support one to four players (six-man matches and royal rumbles only available locally). Against tougher players, any miscues due to bad position, odd animation, or the semi-frequent lag are likely to cost you dearly, and once your opponent has you on the ropes you'll be hard-pressed to reverse your way out of it. The best new online feature in WWE SmackDown vs. Raw 2009 is the WWE Highlight Reel. Anyone can capture clips from their matches, edit them together using the robust toolset, and then upload their clip or screenshots for all to view and rate. Those willing to invest some time will be able to create some pretty excellent stuff, as evidenced by the existing image of Freddy fighting Jason in a flaming ring and video of Obama giving McCain the Rock Bottom.

Of course, these hilarious videos wouldn't be possible without the still-impressive Create A Superstar tool. Once again, with a little time and patience, you can create almost anyone you like, from famous celebrities to hideous abominations. You can then customize your character's move set to craft their fighting style, choreograph their ring entrance, and even create a finisher to decide how he or she (or it) will finish opponents off. The Create A Finisher tool allows you choose from a huge list of move parts and chain up to 10 of them together to create a finisher as quick and brutal or as long and painful as you want. You'll get a constantly updating preview of the move while you design it so you can easily tweak it to your liking. It's really fun just to experiment with all the different move combinations, and this feature really rounds off a formidable suite of customization tools.

WWE SmackDown vs. Raw 2009 benefits greatly by restraining its scope. You can still edit rosters in Career mode, but other than that the menu-heavy GM mode has been fully dropped. The result is a game completely focused on action, and on letting you customize and record that action. While some elements still need improvement, SmackDown vs. Raw 2009 is ultimately successful because it embraces the dramatic fights and outrageous showmanship that are the heart and soul of the WWE. 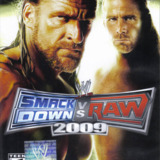 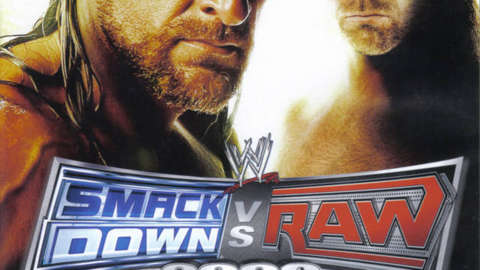