Wrecking Crew is easy to overlook with its bland visuals and basic premise, but in fact proves to be a worthwhile endeavor for any puzzle action fan.

Mario, Nintendo's ubiquitous mascot, has appeared in dozens of games of differing nature since the company started developing video games decades ago. Best known as the portly plumber who battles turtles and androgynous egg-launching pink dinosaurs, Mario sets his plunger aside for a trusty hammer in the oddball NES title Wrecking Crew, now available for the Wii's Virtual Console. What starts off as an unremarkable game of destruction quickly proves to be an addictive puzzler that keeps you busy with tough but doable levels and a rudimentary level editor.

In Wrecking Crew, your goal is to destroy a predetermined number of items on each level. These include columns, brick walls, ladders, bombs, and other structures scattered about. Complicating things are nasty critters that are lethal to the touch; you can avoid them by walking off one edge of the screen and reappearing on the other, though they can follow suit. To smash a piece of scenery, you position Mario over said structure and hit one of two buttons. Bombs will weaken or destroy anything in their immediate vicinity, and they can also knock you off the platform you're on.

At first, Wrecking Crew will appear to be something that gets really old really fast, since level layouts start out somewhat haphazard and it seems as though all you have to do to progress is bash away. However, it soon becomes clear that this game requires quick thinking and sharp reflexes, as you'll realize that you can't just destroy structures in random order. Knocking down destructible ladders too early, for instance, will render the upper platforms inaccessible, and you'll have to lose a life to reset the level.

Oddly enough, the traditionally froggish Mario is unable to leap and must use ladders to ascend platforms. The solution to each level thus comes off as rigidly specific without much room for improvisation. That may sound off-putting, but in truth, levels won't play out exactly the same each time thanks to enemies that aren't entirely predictable. Coiled snakes often come straight at you, but sometimes they split up and try to surround you using the wraparound screen edges. Fireballs shoot at you when you don't expect it, and a nemesis in a hard hat tries to disrupt your routine by knocking you in the air with his hammer or breaking ladders as you're climbing them.

The simple mechanics and tricky level designs do well to overshadow the presentation, as both the visuals and sound in Wrecking Crew are understated. Each level is filled with uniformly dark, grayish structures laid over a pitch-black backdrop. The graphics are serviceable, but they're not exactly pleasant to look at. Similarly, there's nothing irritating about the sound effects or music, and they do their job just fine, but there's nothing catchy.

Mediocre presentation aside, it's easy to get roped into repeating stages until you get them right. Like other such NES action puzzlers as The Adventure of Lolo and Solomon's Key, you'll often find yourself realizing the solution to a particularly tricky stage just as you lose a life or make an irreversible mistake, which encourages you to give it another shot. The game also comes with a hundred stages to sift through, an alternating two-player mode, and a level editor. The interface for the editor is a little unwieldy, as you have to cycle through all of the game's assets with just a single button, but at least you can save your creations.

For 500 Wii points, Wrecking Crew is a surprisingly fun game if you enjoy a good puzzler now and again. The presentation is uninteresting and you may be initially put off by its rigidity, but stick with it and you'll find yourself entertained by its brain-teasing level designs. 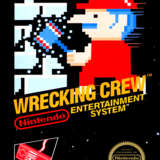