Those who've never played a Worms game or never got around to picking up Worms Armageddon will thoroughly enjoy Worms World Party.

For fans of Team 17's venerable Worms--a long-running series of lighthearted turn-based strategy games--Worms World Party will undoubtedly be somewhat of a mixed blessing. On the one hand, it's clearly the best Worms game to date, as it offers all the great features found in the previous three iterations as well as the addition of several new gameplay options and modes, including the cooperative multiplayer missions. On the other hand, these new modes are only incremental changes of a formula that's nearly six years old, so players expecting significant changes to the Worms series will likely be disappointed by the latest installment.

At its core, Worms World Party is no different from the original Worms, which was released in 1995. The basic premise of the game is simple: You control a team of weapon-toting worms and take turns squaring off against other groups of human- or computer-controlled annelids on any number of side-view outrageous maps. Each team's worm is given a small amount of time to complete a specific set of actions, which typically include moving across the map to set up the optimum attacking location, executing the actual attack, and then retreating into relative safety. Worms are eliminated when you deplete their hit points or when you knock them into the water found in most levels. The weapons that are available to you range from relatively simple arms like shotguns and rocket launchers to truly over-the-top devices like exploding sheep and napalm air strikes. When all your opposing teams' worms have been killed, you're declared the winner. The game is remarkably easy to get into, thanks to its minimal interface and intuitive controls. In fact, these controls are so simple that you can direct your team's actions by using little more than a handful of keystrokes.

Despite its apparent homeliness, Worms World Party is very involved and actually contains a fair amount of depth. For instance, when attacking using a grenade, you'll need to take into account the angle of your enemy relative to your location, the distance to the enemy, the wind direction and wind speed, the fuse timer on the grenade, the "bounciness" factor of the grenade, and any possible obstructions before attempting to strike. Often you'll also need to mind sporadically placed land mines and fuel drums on each level, as a stray shot into one of these can have dire consequences. Ultimately, you'll find the game's humorous and often-surprising gameplay to be quite addictive, if unchanged from Worms, Worms 2, and Worms Armageddon.

As stated earlier, the new additions to Worms World Party are largely insignificant, as they don't affect the core gameplay at all. The game includes a reference guide called the "Wormopaedia," which sorts all of the 60-plus weapons in alphabetical order and gives a technical breakdown of each, including some helpful tips on how best to use each one. The wormpot option is also new, which is basically a random option generator designed to function like a casino-style slot machine. Before starting a game, you're given the option to pull a lever that will spin three reels. Each reel represents a certain gameplay option (such as the inclusion of exploding crates), and all three can combine for nearly 1000 different combinations, resulting in matches that are never quite the same twice. A fairly easy-to-use mission editor also lets you create your own maps, which you can then make available online for other players to download, and a new multiplayer mode will let you play cooperatively with others online. Additionally, Worms World Party comes with several new multiplayer maps, training stages, and puzzle-based single-player maps.

Publisher Titus claims that the graphics have also been updated, but you'll be hard pressed to find any notable differences between Worms World Party and Worms Armageddon. Certainly, there's nothing wrong with the graphics--you'll undoubtedly find that Worms World Party's bright colors and fluidly animated backgrounds fit the overall theme of the game quite well. Likewise, the sound effects and music, though largely unchanged from the previous game, complement the admittedly wacky visuals nicely. One serious problem that the retail version of Worms World Party seems to have is its inability to join the Worms.net multiplayer service right out of the box. When first attempting to log on to the service, we were prompted to download a 5.7MB patch before being allowed to move on. Once installed, however, the game's multiplayer component ran smoothly, despite the fact that the only server currently available is located in the UK.

It's a shame that Titus is forcing Worms fans to pay stand-alone prices for what easily could have been an expansion pack. As it is--those who've never played a Worms game or never got around to picking up Worms Armageddon will thoroughly enjoy Worms World Party. But if you're looking forward to a true sequel, you'll have to keep waiting. 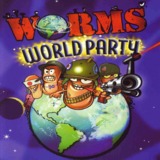