While this game may look cute, it is in fact as sophisticated and enjoyable as the very best strategy games out there.

The spineless and unassuming critters that star in Worms Armageddon epitomize the game itself. You'll quickly notice that the worms in this game are not as meek as they appear and instead are funny, ill-tempered, and wickedly clever. At about the same time, you'll find that while this game may look cute, it is in fact as sophisticated and enjoyable as the very best strategy games out there. It's also highly polished, easily customizable, accessible to all ages, and perfectly suited for quick spells and marathon sessions alike.

That said, it's true that Worms Armageddon isn't all that different from Worms 2. Though it includes an all-new single-player campaign and fully integrated online play, as well as over a dozen new weapons and gadgets for the worms to use, Armageddon looks, sounds, and plays similarly to the last episode, which means veterans of the series expecting something totally new will not find what they're looking for. And everyone else will wish Worms Armageddon offered even more, if only because it's as good as it is.

Worms Armageddon is easy to play and control, two factors that contribute immensely to the game's success. The typical skirmish pits teams of worms against each other, all randomly interspersed throughout some sort of exaggerated landscape ranging from garbage dumps to stacks of books. You take turns with your opponents, inching your forces into position one by one and firing upon enemy worms with an arsenal of weapons, from traditional (grenade, shotgun) to makeshift (baseball bat, blowtorch) to unorthodox (exploding old woman, skunk). The worms even know a few famous martial arts moves for good measure. Most worm weapons are absurd and amusing, and effectively serve specific functions. But since many do overlap in functionality, you can be selective and creative with your arsenal rather than feel restricted by it. You'll witness the events that transpire as the worms duel to the death via a traditional 2D platform-game side view, lending Worms Armageddon a readily approachable if misleadingly simple appearance.

So although it may appear as if that one worm over there just fired a bazooka at his enemy across the screen, aiming that shot was anything but trivial. A worm, not unlike a golfer, needs to take into account such elements as trajectory, wind direction, and power, and although shooting simply involves arrow keys and the space bar, hitting the target won't be quite so simple. Even seemingly fail-safe weapons, like homing missiles and napalm strikes, require skill and foresight to be used effectively. What's more, explosive attacks, such as the bazooka, vaporize the terrain around the targeted area, likely causing the worms in the vicinity to be flung about. It's often to your advantage to try to destroy the earth from under the feet of your enemies rather than target them directly, in an effort to send them careening into the water below, since worms can't swim.

Thanks to the game's sophisticated physics and damage modeling, the results of your attacks will often prove surprising no matter how accurate you think you are. Since maps tend to be strewn with explosives, and the worms themselves explode when they die, oftentimes the results of a successful strike are anything but predictable as an incredible chain reaction ensues. This tightly controlled chaos, together with the precise targeting system and plausible physics, is also essential to this game's success. And the automatic instant replay on especially unbelievable chains of events is a nice touch.

Great graphics and sound don't hurt, either. Worms Armageddon includes a seemingly endless assortment of beautiful and surreal backdrops, which lend most every skirmish a unique challenge, since these landscapes are randomly generated each time. The worms themselves are animated beautifully, and their articulate expressions and bizarre arsenals make these some of the most endearing computer game characters in a long time. Meanwhile, special effects such as fire and explosions all look equally good, lending the game a perfectly consistent and always bright and attractive appearance.

The sound effects that accentuate the firefights, while somewhat repetitive, are as over-the-top and amusing as the graphics, while a rather remarkably grandiose militaristic soundtrack enhances the game's tongue-in-cheek half-seriousness. More remarkable still is to what extent you can customize your worms: As a holdover from its predecessor, Worms Armageddon includes dozens upon dozens of sound schemes for the little guys, most of which are high-pitched, angry squeals. You can make your worms speak Russian, Greek, Afrikaans, around a dozen dialects of English, French, Spanish, German, you name it. Or you can import your own sound effects, just as you can also select a team anthem, an insignia, a tombstone, and customize just about everything else about your team, giving it a unique style that will distinguish you among your peers in a grueling multiplayer match.

Those custom features aptly suggest that Worms Armageddon lends itself perfectly to multiplayer competition. The fully integrated Worms.net Internet play server (though not ideally fast or reliable at all hours as of press time) lets you easily join a game with rival worm commanders from across the world, and the server even maintains your ranking and status based on your wins and losses. Because battles are highly customizable, such that starting conditions for health and ammunition can be easily adjusted, you can join games that emphasize the style of play you prefer, either in favor of mass-destructive or more strategic weaponry. In between multiplayer sessions, you can play against the computer in quick matches or deathmatch battles that become progressively more challenging, just as you can learn the ropes through a convenient if somewhat difficult training mode, then apply them in the single-player campaign. The campaign missions, which must be played through linearly, are mostly puzzle-oriented and recall Psygnosis' classic Lemmings in that they tend to force you to make precise use of a limited supply of tools in order to accomplish your objectives. The puzzle elements of these missions oftentimes prove frustrating, since many of these missions are very difficult, and while the campaign provides an enjoyable diversion from the rest of the game, it doesn't really hold up on its own, nor does it seem intended to do so.

Likewise, although the computer opponent is realistically fallible except at the highest skill levels, it tends to neglect the more obscure or sophisticated weapons available, resorting to mundane explosives nine times out of ten. For this reason alone, the computer cannot ever hope to provide the sort of unique competition that is practically assured with even the most inexperienced human opponent, whose foibles and follies in combat will likely be worth the price of admission if he isn't good enough to fight back in earnest.

It's too bad that the computer opponent doesn't make full use of its full arsenal, and as you play Armageddon more and more, invariably you'll also wish the game had even more weapons, even more diversity in graphics and sound, and even more of pretty much everything. There's no mistaking that Worms Armageddon is both highly polished and totally complete, with far more features and variety and options than just about any other game out there. Nevertheless, the design and execution are so great and so open-ended that you'll know, even as you log more and more hours with the game, that in fact you can't have too much of a good thing. 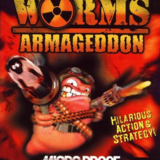