Worms 3D is a pretty good strategy game, but taking the game into full 3D seems to have actually detracted from some of the depth found in the 2D games.

Team 17 understands the value of juxtaposition. It's the crux of the Yorkshire-based developer's flagship series, Worms, where cute, squeaky-voiced cartoon earthworms have been gleefully knocking the tar out of each other with bazookas, grenades, land mines, baseball bats, flying sheep, and just about anything else they can get their hands on for the better part of a decade now. But underneath all the absurdist violence, Team 17 has cleverly been sneaking in some high-quality strategy action that can be enjoyed by novice and expert players alike. The differences between past Worms games have been pretty incremental, and the transition to 3D marks the biggest change the series has seen yet. It's a transition that has ruined better games, but Team 17 makes the transition seem pretty easy.

Save for the anomalous and oddly compelling Worms Blast, all of the previous Worms games have been turn-based strategy affairs, and Worms 3D doesn't mess with that formula. The fundamental task in Worms 3D is to take a small team of worms and use a wide array of weaponry to dispose of an opposing team. During your turn, you're given control of one of your worms. You can inch around the landscape, use jump and backflip moves to get past smaller obstacles, or use special gear such as the ninja rope or the jetpack to access harder-to-reach spots, but there's also a timer in place, making sure you don't dawdle. Once you're where you want to be, you can choose a weapon with which to inflict damage on your opponent. The selection of weapons in Worms 3D is both vast and completely silly and definitely accounts for much of the game's appeal. There are plenty of conventional weapons--bazookas, grenades, shotguns, land mines, and Uzis--but then there's the weird stuff, like the exploding sheep, the Street Fighter II-style dragon punch, and the agreeably chaotic banana bomb. And these are just some of the highlights.

Despite their absurd setting and cutesy presentation, the Worms games have always been pretty serious tactical strategy affairs, with factors like the wind direction, fall damage, and the blast radius of different explosions coming into play. The projectiles are definitely harder to use now than when the worms had only two dimensions to consider, which will usually force you to get a lot closer to your enemy before you launch an attack. Since all of the maps in the Worms games have been bound on all sides by water, one of the most practical strategies is to just knock a worm into the drink rather than try to whittle away at its health, since, as we all know, worms can't swim. By taking the game into 3D, this tactic is made even more prominent, since there are now more sides to push opponents off of. Worms 3D is still a pretty good strategy game, but curiously, taking the game into full 3D seems to have actually detracted from some of the depth found in the 2D games.

If you're by yourself, Worms 3D offers several fun diversions. The campaign mode puts you through a series of maps where you're regularly given objectives other than simply eliminating the enemy, usually involving picking up special packages scattered across the map. Playing through the campaign mode will, in turn, unlock stages in the challenge mode, where you'll have to flex specific skills, such as your prowess with the shotgun, your finesse with the jetpack, or your ability to dispatch the opposing team quickly. There's also a quick-start option, which will toss you into a random game, which is good if you just want a no-strings game of Worms.

But the most attractive aspect of Worms 3D is its multiplayer game. The game itself doesn't differ that radically from a regular game against the AI, but what makes it so great is the amount of customization it allows for. Up to four teams of worms can play in a round-robin game, and the variables you can tweak include, and are not limited to, the weapons available during the match, the amount of health each worm has, the length of the game, the length of each turn, the number of rounds in the match, whether worms take damage from falling, whether the landscape is destructible, and the size, shape, and color of the landscape. All these options, combined with the fast-paced hot-seat nature of Worms 3D, make it a fantastic multiplayer game with a great amount of replay value.

The GameCube and PS2 versions of Worms 3D are, for all intents and purposes, identical. The clarity of the between-level cutscenes is a little cleaner on the PS2, and the frame rate can get a little jerky in the GameCube version, but these differences are pretty nominal. The control schemes are also basically identical, so, ultimately, factors outside the game itself--which system you have or prefer, the price, or whatever--will determine which version of Worms 3D is the best fit for you.

The look of Worms 3D is usually very sunny and very cartoony. There's no consistent theme, really, and the levels you'll do battle on include a spooky graveyard, a re-creation of King Kong climbing the Empire State Building, and the moon. The graphics are pretty simple, looking kind of blocky and sporting some rather simple textures, but it has a clean look to it, and the personality definitely helps the game overcome the relatively basic technology that powers it. After seeing Worms Blast, where the worms were cel-shaded, it's a little disappointing to see that the worms here are just textured normally, though they still look and move pretty well, regardless.

The voices of the worms have been a linchpin to the aesthetics of the series from the beginning, and Worms 3D knows not to mess with a winning formula here. On the whole, the worms will make off-the-cuff comments in a cute, squeaky voice, but the beauty here is that there are just shy of 40 different voice themes that you can assign your worms, giving you plenty of options if you grow tired of a particular set. The bulk of the in-game sound effects have been lifted directly from past Worms games, and the familiarity of the squeaky noise the worms make as they inch along, the hollow clank of a grenade bouncing off surfaces, and the solid kerplunk when worms end up in the water not only let you know you're playing a Worms game, but also complement the game's outlandish tone on their own. There's a bit of music in there too, which is light and upbeat, though not in an overly cartoony way. Think of MIDI music from an Apogee shareware game using improved instrumentation, and you're almost there.

The only nagging issue to really be had with Worms 3D is that it maybe seems a little too much like the 2D Worms games of yore. If you're new to the Worms series, then this is a nonissue for you. Worms 3D stands up as a cute, quirky little strategy game that has some excellent multiplayer capacity. However, the old-timers out there may find that though the transition to 3D is novel, it doesn't really have much impact on the overall experience. There are worse things you could say about a game, and ultimately, it's good to see that Team 17's nihilistic annelids have survived the transition to 3D without much incident. 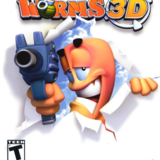