The game's most obvious mistake is that the game lets people engage in only the pursuit part of the cops-and-robbers equation, leaving those with the deviant desire to outrun the fuzz out in the cold.

World's Scariest Police Chases is actually a TV series produced by Fox Television. One of the more visceral reality TV shows, World's Scariest is a compilation of real-life police-chase footage overdubbed with melodramatic commentary. Apparently, this show has enjoyed at least a modicum of success, as Fox Interactive has decided to create a game that's based loosely on the show. Unfortunately for the rest of us, the gaming interpolation of the TV series lacks the voyeuristic, visceral thrill of the show and is, on a whole, a poorly realized game.

The game's most obvious mistake is that the game lets people engage in only the pursuit part of the cops-and-robbers equation, leaving those with the deviant desire to outrun the fuzz out in the cold. World's Scariest puts you behind the wheels of various police vehicles, such as standard cruisers, SUVs, undercover cars, and bomb-squad trucks. You're presented with 20 different missions in a linear fashion, though a distinct pattern of repetition is established early on. The first few missions charge you with simply apprehending car thieves and drunk drivers, while later missions have more complex mission objectives, like escorting an ambulance or, in a mission that is an obvious homage to Die Hard 3, disabling bombs scattered across the city before the clock runs out. There are some decent ideas here, but the halfhearted control and repetitious missions get in the way. Crooks can be stopped by ramming into their car until it's out of commission, chasing the perp until the chase meter at the bottom of the screen fills up, or, in more volatile situations, firing at lawbreakers to disable their vehicle. Ramming into the crooks would make more sense if your police cruiser weren't overly sensitive to bumps and bruises--you'll often find yourself on the road, dead before the criminal. Also, damage done to either your car or the criminals isn't cumulative, meaning that you (or the criminal) could be on the verge of falling off your wheels. Plus, you'll still perform just as well as if you had just pulled off the lot.

With the PlayStation as mature as it is, you would expect developers to be well versed in the ways of PlayStation development and would expect to be able to bend it to your will any way you please. Unfortunately, though, World's Scariest Police Chases looks bad for a PlayStation game. The cars and environments are all made up of fairly low-poly count models, and there's only about eight or nine different car models in the game. The low-res textures are washed out, muddled, and prone to texture warping. The draw-in distance is especially bad, to the point that you could be chasing a car down a straightaway and not be able to actually see it, forcing you to rely on the miniature city map in the lower left-hand corner of your screen.

World's Scariest Police Chases sounds about as good as it looks, with a single engine sound for the different police vehicles, a tire screeching sound, a handful of collision effects, and a siren. But while the developers appeared to have skimped on just about everything in World's Scariest, they spared no expense on the voice talent. Sheriff John Bunnell, the man who provides the wonderfully cheesy, melodramatic voice-overs for the TV show, drops hysterical bits of knowledge between missions, making the game almost worthwhile. Those familiar with the show will recognize his voice instantly, but those who are not will have to hear it to believe it.

The idea of taking this "America's Funniest Home Videos on PCP" style TV show and basing a game around it is bizarre, and kudos to the developers for even having the nerve to try. However, this fact doesn't excuse this ugly, boring game--nor does it mean you should play it. 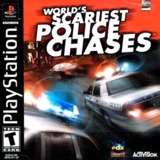