If you can convince your friends to play alongside you, World Sports Competition can be quite fun.

Those of you that enjoy track & field video games, and also have a friend or two willing to come over and compete with you, may want to check out the TurboGrafx-16 rendition of World Sports Competition that's available for the Wii's Virtual Console. It isn't overly intricate or an audio-visual masterpiece, but with the right people in the room, it can be loads of fun.

In a nutshell, World Sports Competition simulates the Summer Olympics. The list of events spans the running, swimming, rowing, shooting, and archery disciplines, and also includes field events like the discus, javelin, and hammer throw. You can tackle single events in the training mode or try to take the overall gold medal by competing in the competition mode, in which you have to go through each event in sequence. By synching up multiple Wii Remotes or plugging in multiple GameCube controllers, you also have the option of enlisting as many as five human-controlled participants in the competition.

The controls are easy to get the hang of, given that most events typically entail simply mashing the two buttons in alternating fashion. Shooting events make use of an aiming crosshair and a power meter similar to the type employed by golf or football games for drives and field goal kicks, respectively. Likewise, the presentation is just about as straightforward as the controls. The 2D characters that make up the all-male cast huff it and puff it out there, while the colorful side-scrolling backdrops plainly depict the various stadium, pool, and field locations. The accompanying audio consists of upbeat music, some appropriate sound effects and crowd noise, and a few recorded announcer comments. There aren't a whole lot of customization options, apart from changing your athlete's skin tone and clothing colors. The game does at least keep track of high scores and lets you save and restore competitions-in-progress.

You probably won't get much out of the game by yourself, aside from figuring out how to play. However, World Sports Competition really comes into its own when you convince other people to play along with you. A few events make players take turns, but the majority let as many as five people mash buttons simultaneously. Human players aren't as predictably skilled as the CPU competitors, and the camaraderie and shouting that develops from friends battling it out on a couch definitely injects the energy that the presentation itself is missing. So hold on to those 600 Wii points if you tend to play games by yourself, but consider making the purchase if you have friends over on a frequent basis. 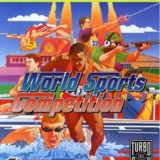 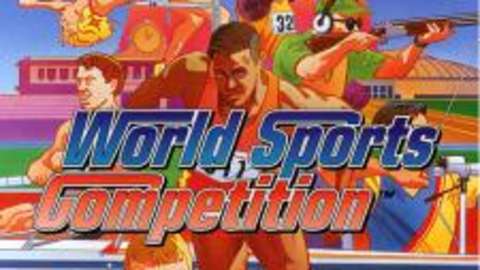