It's not a stunningly accurate sim, it doesn't provide the sort of overview of Mercedes-Benz cars that you'd expect, and its graphical presentation has more than a few flaws.

"Duplicitous" is a good one-word description of World Racing. Somewhat like the CD-ROMs in the bargain rack at Target that advertise "101 Great Games for Windows," World Racing sounds good in theory but doesn't deliver in actuality. The description on the back of the box and what's inside are two very different things. What the game does manage to deliver looks and plays well under ideal conditions, but it also highlights the game's shortcomings. Ultimately, your opinion of the game will depend on two things: how much you like Mercedes-Benz cars, and how easily you can forgive a so-so game for repeatedly attempting to pass off cars with an extra 20 horsepower as different from ones you've already driven.

World Racing advertises itself as a simulation featuring a survey of 109 Mercedes-Benz cars. You'd think that would include a lot of cars from the company's long history, but you get only a few old classics and prototypes. The bulk of the cars are the 2003 models in all their variations. Yes, technically the A160 and the A160 CDI are different cars that drive slightly differently, even if they look the same. But when you start unlocking cars and they include the identical-looking A140, A170, A190, A210, and A210 Evolution, and then it happens again for C-, E-, G-, and M-class cars, you start to feel that the claim of 109 cars is a bit deceptive. Then you start unlocking a seemingly endless string of station wagons and you feel like you've been had. Even discounting the variations, there's still a good number of cars, but the promise of 109 is pretty misleading. Furthermore, the information about each individual car is limited to a few basic stats, not the sort of in-depth technical and historical information you'd expect from a game devoted to one manufacturer.

The same goes for the claim of 120 tracks. There are actually seven maps, and while they're very expansive and good looking, there are still only seven, with 120 different routes traced along them. The routes themselves are often focused on scenery rather than making an interesting race. Banked curves are virtually nonexistent, and some tracks are completely flat. At least the scenery is attractive enough to be worth focusing on--but not too closely. World Racing boasts that it's a racing game that encourages exploration, but things sort of fall apart if you take it up on the offer. Much of the game just wasn't designed to be viewed up close, and the potential excitement of off-roading in a G-class SUV is significantly reduced when you find that you can drive right through trees, over creeks without a splash, and even across bays and rivers like they were just another piece of road. Meanwhile, the skies are thick with all manner of aviators. Helicopters, planes, jets, paragliders, balloons, and even stealth bombers and UFOs are constantly swooping and floating through the environments. The average number of flying objects in your field of view at any given time is around three on some tracks. The developers are so proud of their air force that it continues to fly around even if you pause a race replay.

Racing itself is a fairly uncomplicated matter, even if you don't want it to be. There's a career mode and a multiplayer mode. Multiplayer is just a simple four-player split-screen race, with no system link support. Career mode lets you create a profile, picking out a license plate style, what's on the license plate, and a favorite color. Your career is a series of championships, in which you take on a set of races to build your rank until you are declared champion. In each race, you simply pick one of the cars you've unlocked so far and go. As you race, you build up stats according to how well you perform. If you don't make driving errors and do some good powerslides, your skill rating goes up. If you don't hit other cars or block them, your fairness rating goes up, and so on. Interspersed within the races are missions, single tasks where you're given a background story like, "A mountain rescue team wants to see the capabilities of the G400. Make it through all the checkpoints in under two minutes." The missions are challenging, and a good break from the career races, though some car-customization options between races would have been even better.

The physics of the cars and the level of the AI can be adjusted. There's a slider bar for physics that goes from arcade to simulation, and the AI can either be dynamic or set to a static difficulty expressed as a percentage. The level of adjustment is very fine, with plenty of settings between the extremes. However, there are problems. First, setting the physics all the way to simulation doesn't really make the game feel much like a simulation--you have to really work the car hard to see any pitch and roll in the chassis at all, and flipping the car is way harder than it should be. Drafting behind a car also seems to have no effect. Traction is modeled well, but damage is simply represented a meter on the bottom of the screen that goes up only a few percentage points even if you hit a building head on at 90mph. You'd have to crash the car multiple times to even notice a change in the car's performance, and then it's just ever-increasing stuttering in acceleration, lower and lower top speed, and worsening alignment. Rain has an unrealistically uniform effect on the surface of the road, and the rain effects themselves look horrible--your tires kick up white puffs that look like smoke and clip right through your car. Rain also exhibits the same behavior as the airplanes with regard to race replays. Second, setting the AI to dynamic just makes the other cars race ahead of you and stay there.

Overall, World Racing is only a fairly decent racing game, and it's not successful in its attempts to be more. The developers either shot too high or didn't have enough time to polish the product. Probably the latter, because besides the odd bugs like pause-immune planes and ghost trees, the menu system looks like it never changed from the early stages of development and isn't very user-friendly. The music, provided by the UK radio program Ministry of Sound, can get annoying pretty quickly, so you'll want to have some custom soundtracks ready.

Minor issues aside, the game advertises many things about itself that just aren't true. It's not a stunningly accurate sim, it doesn't provide the sort of overview of Mercedes-Benz cars that you'd expect, and its graphical presentation has more than a few flaws. For those reasons, it's worth skipping even if you have an uncontrollable urge to drive several of the world's most well-engineered station wagons. 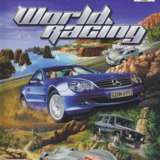 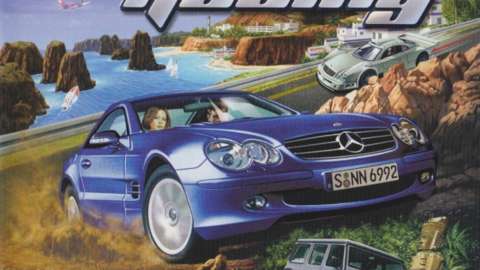 This racing game from TDK Mediactive will allow players to race in numerous different Mercedes-Benz cars.