WTF is ridiculous and there's nothing else quite like it. It's not for everyone, but if you're looking for something insane and Japanese, you'll probably love it.

Work Time Fun hates you. And to prove the depths of its hatred, it's going to make you perform the most menial minigame tasks ever put on a disc. Oh, and your reward for completing those tasks? How about more tasks and a bunch of meaningless trinkets? Sound good? That's the crazy part. Work Time Fun shouldn't be any good, yet it all works. With its heavy dose of Japanese eccentricity and an English translation that manages to preserve most of the chaos, Work Time Fun is a unique package that isn't for everyone. But like Katamari Damacy, Work Time Fun is a game that you wouldn't have expected to leave the Japanese market. This game is weird and completely crazy, and if that's your thing, you should pick it up.

The concept behind Work Time Fun is that you're a temp worker, taking on various jobs by visiting a placement office. You're offered four different jobs each time you view the placement menu, so you start the game with four of the 40 games unlocked. You earn money by completing the games successfully. From there, you take your money to the vending area, where a bunch of capsule machines await. There are different machines here to use. The cheapest machine dispenses goods for $1 while the most expensive machine dispenses goods for $50 a turn. Out of the capsule machines come more games, a set of crazy "tools" that you can mess around with, and a ton of useless trinkets that you'd expect to get out of a capsule machine, such as superhero-shaped erasers, bouncy balls, vegetable-shaped magnets, and Dracula teeth. You can view a list of the trinkets you've unlocked and view a few often-clever sentences about each item. The catch is that different items only come out of certain machines, so there's no guarantee that you will get a new item with each spin of the machine's knob. So you need to work harder and earn more money to buy more items, so you can work harder, and so on, until you realize that you've spent two weeks of your life playing nothing but the pen-capping job and then stop playing all together.

The game's jobs are pretty good. One of the starting four is called pendemonium, which puts you on an assembly line where you need to put the caps on pens. Occasionally, the pens are flipped, so you'll have to flip them around before capping them and moving them on down the line. It never ends. There are no winners in pendemonium. You quit when you simply can't take it anymore, collect your paycheck, and move on to the next job. Most of the other jobs, though, aren't quite as open-ended. Chick-sorting has you sorting baby chicks for 10 minutes into three different bins: male, female, and heaven (which is where you toss the blue, motionless dead chicks that come your way). Baseball superstar puts you on the field while a skeleton wearing some sort of cowboy hat hits balls to you. You must catch and feed these balls to the first baseman, who is a skeleton wearing a crown. Oh, and the whole thing looks and sounds a lot like the Namco/Tengen classic NES game RBI Baseball. In the different games, you'll get to guess the phone numbers of girls for money; collect mushrooms while moving across a busy street that's pretty reminiscent of Freeway for the 2600; drive full speed directly at a cliff and try to brake just before falling off; take down an order from four hungry diners who can't make up their minds; and much, much more. There are also a few multiplayer jobs that you can play wirelessly. Although a couple of the jobs are really similar, there's a wide variety of insane stuff to do in Work Time Fun. And the way you unlock the jobs means that you're always interested in continuing forward--just to see the next crazy thing you might unlock. But you can make unlocking new things easier because the game doesn't save until after you go back to the main menu after unlocking things. So if you spend all your money and don't get anything new, you can just shut the game off, turn it back on, and try all over again.

The tools menu has a few nongame items that you can mess around with also. One of them puts a pair of eyes on the PSP screen, so you can hold the PSP up to your face and make it look like you've got crazy eyes. Another item provides your Chinese horoscope. The most useful and most ridiculous of the bunch is the ramen timer. You can set it to count three, four, or five minutes, depending on how long you need to cook ramen. While you wait, you'll see a series of videos that feature a man or a woman in a bikini. The man flexes his muscles and proclaims that ramen got him all buffed. The woman asks you if your chopsticks are ready and plays with a ball. Then she says, "Squares are bigger than circles, you know?" These videos have been dubbed into English from the original Japanese versions, but the English dubbing definitely maintains a high level of craziness.

The game was originally released as Baito Hell 2000 in Japan, and beyond the English translation of the menus, game names, and help text, the game is largely intact. If you didn't play the heck out of the Japanese version, you wouldn't notice the difference, but a few of the game's parodies have been softened. The crossing-guard game that has you counting humans as they cross the street shows a face at the bottom of the screen that looks a lot like the guy from Doom. But in the US version of the game, he's wearing glasses. The cliff-racing game had a character that sort of looked like a long-nosed Mario. That character's not in the US version at all. Instead, one character is the horse from the Japanese version, and the other character is that same horse but with antlers. None of the stuff in the Japanese version seemed like it was so blatant that it could result in a lawsuit, so the changes seem weird. But again, they don't really matter in the grand scheme of things. The one thing that's noticeably missing from the US game is the leaderboard option. The Japanese version had a password-based system that you could use on the game's Web site to post your score. Now we'll never get to know who the pen-capping leader is in the US.

The game's visual style is all over the place because each game looks almost totally different from the others. Some of them use photos of actual people. Others look little better than an Atari 2600 game. The audio, similarly, is all over the place. All told, the presentation is really great. It's cohesive because it lacks cohesion...or something, and it adds to the chaos quite nicely.

It's worth restating that Work Time Fun isn't for everyone. Some people aren't going to get why a pen-capping minigame is funny, or why you'd want to spend hours trying to unlock a minigame that's a shameless rip-off of Lunar Lander. But if you're looking for something different, you can't get much more different than Work Time Fun. 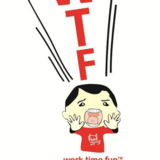