It's not a huge leap forward for the series, but Wipeout 2048 is still a thrilling racing game with an enviable sense of style.

Wipeout 2048 is all about the familiar: the feel of the ships, the layout of the tracks, and the punch of a rocket. This is a game you've played countless times before and on numerous Sony consoles. But does that make it any less thrilling? Fortunately not. The mechanics of the floating speed racers have been sharpened to a fine point, with tracks that are intelligently designed to reward both racing skill and aggressive combat. The visuals are also as smooth as they are beautiful, providing breathtaking vistas for you to ogle during the frantic, twitchy races. If you're expecting heaps of innovation from 2048, you might come away disappointed. But as soon as you dive into the mammoth single-player and multiplayer campaigns to blast a few ships, you'll be having too much fun to notice.

Much of Wipeout's charm lies in its vehicles; sleek, antigravity ships that float above the track, possessing loads of acceleration and a full complement of weapons. By floating, the ships handle quite unlike a traditional, ground-based vehicle. They glide effortlessly over the surface of the track, unconstrained by the likes of friction. With little traction, guiding the ships around a circuit is tricky, particularly if you're new to the series. You may initially spend a lot of time careering into walls and crashing into other opponents.

After some lengthy practice and judicious use of your ship's air brakes around tight corners, you soon get the hang of it. But that's not to say things get easy--far from it. Races are gloriously twitchy affairs that require precision and concentration to win. And that's before you take into account different ship types; some are built for speed, whereas others are outfitted with heavy armor to make them better suited for combat. There are also numerous power-ups, such as homing missiles, mines, and speed boosts, all of which add a layer of strategy to the already tense racing.

A pilot assist mode is available if you're having too hard a time. It takes care of a lot of the air braking for you and gently eases you into corners, letting you dive straight into racing, without having to worry about developing your skills until later. If, on the other hand, you want to make things even harder, then you can race using tilt and touch controls. Tilting the PlayStation Vita left or right steers, while power-ups are activated using the touch screen. It's a responsive enough system, but it lacks the accuracy of the physical controls, which--given the twitchy nature of the racing--makes things far harder than necessary.

2048 features a new touch-friendly interface for its single-player and multiplayer campaign modes. Each event is represented by a hexagon, which is laid out onto a grid. Tapping on a hexagon lets you see what type of event it is and what you need to do to complete it. If you succeed, more events appear on the grid, as well as new vehicles, creating chains of hexagons emanating from that original event. It's a system that's easy to use, looks great, and provides an at-a-glance way to track your progress without resorting to dull tables or statistics. As for the types of events you can choose from, there are standard racing and time trial events, as well as combat events, where you have to concentrate on dealing damage to score points. The Zone events are trickiest, where you have to race around a garish, 8-bit-inspired version of an existing track and avoid hitting the walls until you've cleared the required number of zones. It's devilishly difficult but incredibly satisfying once you succeed.

Most of the tracks are set on the streets of a futuristic city. Huge skyscrapers and office blocks set the scene, with bright neon signs, road markings, and streetlights adding splashes of colour to the otherwise gray backdrop. The tracks are noticeably wider than in previous Wipeout offerings, which makes ship-to-ship combat a little easier, though there are still plenty of tight turns for you to navigate. Some tracks feature huge ramps for you to jump off of, letting you perform midair spins that give you a speed boost upon landing. Others are set above the cities themselves, devoid of any barriers, where one wrong move can send you flying off into the wild blue yonder.

The tracks are an evolution of those from previous games in the series, taking into account their successes and failures to form intelligently designed circuits that reward both those who choose to just race and those who take on more of a combat role. Unfortunately, long loading times mean jumping into a race takes far longer than it should: upward of 40 seconds. That's frustrating enough at home, but when all you want to do is go for quick blast on the bus, it becomes infuriating.

While the vast majority of tracks are new, some are recycled from the recent Wipeout HD Fury on the PlayStation 3. But there's a good reason for that: 2048 supports Cross-Play, which lets you race against PlayStation 3 users. The mode is a little confusing to set up, but it works well once it is, with smooth and lag-free gameplay. A small icon in the lobby lets you know which players are on the PS3 or Vita, but neither side has any advantage over the other (unless some poor soul has decided to use the Vita's tilt controls).

Cross-Play is entirely separate from 2048's full online mode, which takes the form of a campaign similar to that of the single-player. Rather than each of the hexagonal nodes representing events, though, they represent objectives for you to complete, such as finishing in first place, hitting an opponent with a certain weapon, or simply taking part. If you succeed, more objectives open up. Because the objectives aren't tied to specific tracks, the game throws you straight into a race with others without fuss, which means you can get into a race quickly and always make progress.

Like all Wipeout games, 2048 features an excellent licensed soundtrack to keep the pulse racing during events. Artists include the Chemical Brothers, Deadmau5, and Kraftwerk, so expect big beats, deep basslines, and plenty of blips and bloops. It's a tracklist that gels brilliantly with the stark visuals of the game, creating an air of cool and a sense of style that few games can match. Sure, it's a style you've seen in countless iterations of Wipeout, but it still works brilliantly. Coupled with the exciting racing, lengthy campaign, and multiplayer modes, Wipeout 2048 is fantastic fun and a great addition to the series.

'
View Comments (33)
Back To Top
7.5
Good
About GameSpot Reviews 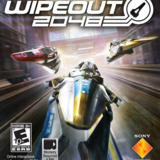