While the game is, in its little digital soul, a side-scrolling shooter, it really, really wants to be a simulation.

Wings of Fury is a Game Boy port of the old Apple II sim-shooter. While the game is, in its little digital soul, a side-scrolling shooter, it really, really wants to be a simulation. These two disparate elements, though, help the game's tight, tactical side shine.

Wings of Fury puts you in the cockpit of an F6F Hellcat, and your mission is to help eradicate the Japanese presence in the Pacific during World War II. To aid you in your patriotic duties, you're given access to four types of weapons, one being your standard-issue machine gun, and the other three being rockets, bombs, and torpedoes. Each weapon is suited to deal with a certain type of target.

Each mission starts off at an aircraft carrier, from which you'll set forth equipped with the weapon of your choice. At the beginning of each mission, you're given a hit list detailing the types and quantities of enemies you must ace before you're allowed to land and proceed with your duties. The missions, for the most part, are hit-and-run deals, involving enemy units and fortifications on islands. Once a target is cleared, you proceed to the next; this usually involves refueling/rearming/repairing your craft, but landing on the carrier between swoops is quite an ordeal in itself. The action requires you to tap down, quite gently, in order to ease your plane into a slight descent. On reaching a certain altitude, your plane will release a landing hook, which you can use to touch down, if and only if you're within a certain distance from the end of the runway. Any small screwup, and you're right off the edge again, turning around to try again, fingers crossed that your fuel doesn't run out. Landing is harsh in most flight games with any hint of a simulation aspect. Wings of Fury is no different. Flying the plane is a rather straightforward task, but you do have to take altitude, level, fuel, and oil-pressure into consideration. These factors mostly work behind the scenes; master landing (good luck), and stop your carrier between particularly nasty swoops, and you should be in ship-shape.

The game's aesthetics are plainly functional; you won't be dazzled or nauseated. Otherwise, the game is truly a gem of its time, resurrected and given a face-lift for our age. If your life consists of a lot of downtime, then you should definitely check this out. 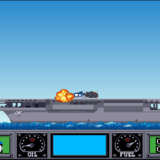 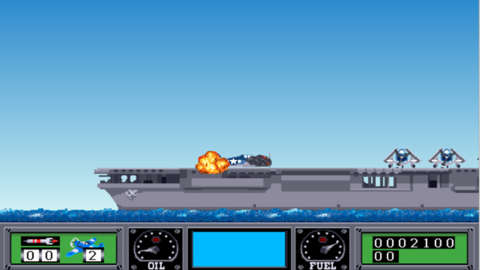