Wild Arms 2 isn't bad, but it doesn't begin to approach today's standard of good, either.

Released during the "Great RPG Drought of 1997," the original Wild Arms was an oasis of adventure in a world almost completely without alternatives. While it was a pretty generic RPG overall, players' standards were low and the title was welcomed. Wild Arms 2 is equal in caliber to the original title, and it suffers the burden of comparison in a market flooded with better alternatives.

Welcome back to the world of Filgaia... sort of. While the world retains the same name and other similarities, Wild Arms 2 is not really a sequel but rather a separate story set in the same universe. A new army recruit, Ashley, is transformed into a hideous demon in a dimensional experiment conducted by unknown foes. As the experiment's only survivor, Ashley joins the war-hero-turned-criminal Brad and the bumbling magician Lilka in the newly formed ARMs special forces. Determined to uncover the evil that twisted Ashley's body and soul and prevent further experimentation with the dark parallel universe, the group finds a far greater conspiracy, which, of course, threatens the entire world. Ashley, Brad, and Lilka will be joined by other adventurers on their journey, and each will have unique powers and perspectives on the coming disaster.

Like the original Wild Arms, Wild Arms 2 combines standard random-encounter-based RPG gameplay with Zelda-like dungeons and puzzle solving. Each character in the three-person party has a handful of tools and skills at his or her disposal for manipulating the environment and solving the plethora of simple puzzles. Dungeons are viewed from a 3D rotatable three-quarter view, and manipulation of the camera is required to find exits, chests, and puzzle elements alike.

Beginning with the most blaring and over-the-top fanfare to grace an RPG, Wild Arms 2's combat system is, ironically, slow and unexciting, not to mention strategically nontaxing. The characters have a variety of attacks at their disposal, such as magic and the use of ARMs weapons. Magic and ARMs attacks require the use of force points (FP), built up by giving and receiving damage. Throw in the concept of magic as a virtually unlimited resource, and you've got an easy game. In a nod to the Final Fantasy series, Wild Arms 2 features a variety of interesting character-customization options. "Guardians," similar to Final Fantasy VIII's Guardian Forces, can be equipped to modify your stats and grant additional powers, including the ability to summon great beasts into battle. As in the first game, magic spells are scribed onto crests found throughout the game, and they let you fully customize a relatively small spell library. New to Wild Arms 2 are personal skills, which are status-enhancing abilities that can be purchased with a pool of skill points accrued throughout the course of the game. Personal skills include resistance to status effects and decreased FP usage. While character customization is always welcome, Wild Arms 2 just isn't difficult enough to really warrant this level of tweaking, so the point is fairly moot.

Wild Arms 2 also features a logically questionable overworld map system, implemented to keep you on the straight and narrow. Locations on the map are not visible until two events have occurred: you've been told about the location by a nonplayer character and you "sonar ping" near its actual location. Why a giant castle is invisible is unknown, and searching for the locations is an exercise in pointlessness. Completely removing the motivation to explore removes any nonlinearity the game might have.

Wild Arms 2's gameplay suffers from comparison to other, more original, modern-day RPGs, and its technology is completely destroyed by the same comparisons. While the 3D towns and dungeons look good enough, the battle engine doesn't seem to have changed one lick since the first game's 1997 release. While the character models are less "superdeformed," they are low in polygons, heavily jointed, and poorly textured. In addition to having the worst monster designs since Crave's miserable Shadow Madness, Wild Arms 2 also features terrible animation and spell effects. While it's unrealistic to expect Final Fantasy-style production values in every RPG, Wild Arms 2's technology is subpar and reminiscent of yesteryear's low-budget RPGs. The only thing helping the game's visuals are the impressively high-budget anime cutscenes, featuring smooth animation and far more appealing renditions of the game's characters. Obnoxious battle fanfare aside, Wild Arms 2's music is probably the game's highest point. From soothing town anthems to sinister bad-guy themes, Wild Arms 2 is, aurally, much better off than its predecessor.

Wild Arms 2 isn't bad, but it doesn't begin to approach today's standard of good, either. While a number of RPG players have fond memories of the original Wild Arms, they'll most likely be surprised and dismayed by its dinosaur of a sequel. While this doesn't bode well for Wild Arms 2, it is pleasing to note how far the genre has advanced since the original game's release. 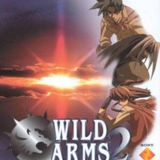