Regardless of personal tastes or preferences, there's one game that everyone who picks up the Nintendo Wii at launch in the US will get, and that's Wii Sports. This is the game that Nintendo has chosen to include with its new hardware, and it makes for a pretty smart package. It's a collection of simple games based on the sports of tennis, baseball, bowling, golf, and boxing. It can admittedly be a little short on depth at times, so those looking for stunningly realistic renditions of these sports will need to look elsewhere. Wii Sports uses common, relatable activities to provide an example of how to create a tactile experience on the Wii. To this end, it's quite successful.

What immediately makes Wii Sports attractive is its ease of use. Each of the games shaves its respective sport down to a few essential elements and then has you pantomiming these basic activities with the Wii Remote--and in the case of boxing, the Nunchuk as well. For tennis, all you'll be doing is swinging the Remote as though it were a tennis racket. At the start of the match you'll flick the remote up to toss the ball in the air, and then with a quick swing you'll serve the ball. Depending on your handedness, swinging to the right or to the left will produce a forehand or backhand swing, while the game itself will move your player about the court. It generally does a good job of putting you in front of the ball, allowing you to focus entirely on your return, something that's determined by the shape and speed of your swing. You won't have pro-level, laserlike accuracy, and your timing governs most of your directional control. It's ideally either a two- or four-player game, though the artificial intelligence can facilitate a decent doubles game if you're on your own. You can choose from a one-off game, best of three, or best of five, and that's about it for tennis.

Baseball is reduced to batting and pitching, with all of the fielding handled on your behalf by the game. The motions are pretty analogous to the real thing, so you'll hold and swing the remote as though it were a baseball bat. You'll see your batter waving the bat over his shoulder as you do the same with the remote, but you don't need to worry about your strike zone, just the timing and speed at which you swing. There's a little more to pitching, which relies on an over-the-shoulder, down-and-forward motion to emulate your standard big-league overhand pitch, and the speed of this gesture will determine the speed of your pitch. You can add a little mustard by holding the A button to produce a curveball, the B button for a screwball, or both for a splitter. You can affect the direction of the ball using the D pad before your pitch, though the game doesn't give great feedback as to how high, low, inside, or out the pitch will be. Again, it's a better experience with two players, but it's still pretty good against the AI. It's most fun in short bursts, so the fact that the games are limited to three innings seems like a good thing.

Bowling is perhaps the most nuanced of the games included in Wii Sports and generally comes across as the most intact sport of the five, with just the right amount of technicality. You'll start off holding the remote in front of you pointing straight up, then you'll move it down, back, and forward again. You'll hold the B button as you swing, and when you let go, your player will release the ball. Like with a real bowling ball, any twist in your wrist as you swing will give your ball some spin. And, like with a real bowling ball, you can counteract spin by moving your player's starting position to the left or right, as well as your angle of attack, before you throw. Up to four players can play a full 10 frames here, and the fact that your success isn't governed by interacting directly with others somehow makes bowling especially accessible.

The actual sport of golf is one of restraint, which is definitely the focus of Wii Sports' take on it. Swinging the remote as though it were a golf club basically emulates the old rising power meter that was once standard in all golf video games. You'll see an onscreen power meter that goes higher the harder you swing. There are dots at regular intervals on the power meter that correspond with the dots on your ball's projected path in an onscreen minimap so that figuring out how hard you need to swing is mostly a simple matter of determining which dot you need to swing to. Of course, you'll have the winds to contend with, and there's the ball's bounce and roll to be considered as well. While it can be tempting to just grip it and rip it when you're making your way up the fairway, if you swing so hard that you go past the top of your power meter, you'll slice or hook the shot. Putting works similarly, though with a much more subdued motion. As natural as the swing can feel, it's a little contrived, and you'll see that you can continue to give the power of an underpowered shot a little bump by continuing to raise the controller up and forward after the ball has already left the ground. There are only nine different holes of golf, which start off as straight shots and dog-legs and end with an interesting hole that spans a small archipelago. We found the swing to be a little fussy at times, but not so much that we didn't wish there were more holes to play through.

Boxing is the only Wii Sports game that uses the Nunchuk attachment. You'll control your fighter's stance, blocking, and punches by holding the remote and the Nunchuk and moving them accordingly. Holding them right in front of you will block, and you can also dodge punches by swaying forward, back, and side-to-side. Boxing can be the most physically exhausting game of the five, since swinging your fists causes your fighter to do the same. You'll need to aim high and low with your actual swings if you want to hit your opponent specifically in the head or body. Since only the Wii Remote interacts directly with the movements onscreen, the position of your off hand is at least loosely tied to it, making it difficult to distract your opponent with an uppercut with one hand while you try to sneak in a body blow with the other. The game goes split-screen when you're up against a live opponent, and matches seem to always end in a knockout, so you don't need to sweat the judges.

Despite their relative simplicity, there's still a learning curve to the games in Wii Sports, and a training mode is included that not only serves to help you hone your skills, but can be a fun challenge for those who've already got a handle on the games. There are three different activities for each sport, and they focus further on specific aspects of the game. For example, in tennis you'll be challenged to return as many consecutive, relentless serves as you can without missing. Baseball has you competing in a home run derby. Bowling has you working on using spin to your advantage by placing barriers strategically in the lane. Golf will challenge you to make it to the green in a single shot from a variety of positions. Boxing tests your power against a series of punching bags that you need to knock clean off their chains.

It's in the training mode, though, that you'll probably discover that you don't need to perform big, sweeping motions in a few of the games to play well, which is too bad, since it seems a little counter to the notion of the package. Another way Wii Sports keeps you coming back is with a daily fitness test. Here you'll participate in a random series of training mode challenges, and based on your performance you'll be assigned a fitness age, a none-too-subtle nod to the Brain Age test in Nintendo's DS puzzle game of the same name. It worked in Brain Age, and it seems to work well in Wii Sports, too.

Wii Sports is the first Wii game that uses the Mii, a digital avatar that you can create and customize from the console's Wii Channel interface. These figures, which look a bit like further simplified versions of Playmobil people, populate Wii Sports, and they set the tone for the look of the game. The environments aren't as overtly abstracted, but their look is simple and clean, something that comes across on both standard and progressive scan displays. The sound follows suit with simple, crisp effects, and though it's perhaps not as striking, it does make nice, mostly underplayed use of the Wii Remote's speaker.

The first time the games included in Wii Sports were shown to the public, it was simply as tech demos to prove that Nintendo wasn't totally crazy for building a whole console around motion-sensitive controls. Though there's still kind of a tech-demo feel to Wii Sports, it's a fun, unique package you'll enjoy so long as you don't expect too much detail from it. 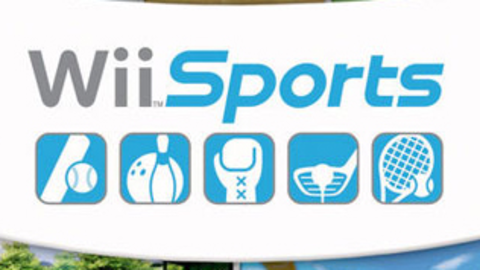