Not exactly the country club.

Wii Sports is an undeniably important game to the whole of gaming history. Its status as a pack-in with the original Wii was responsible for getting the console into millions of homes (and breaking a few TVs), but it also signaled a significant change in player demographics that had been a long time coming. As the Wii U struggles to gain the sort of consumer traction its predecessor had, Nintendo has reissued the now-classic Wii Sports package, updated with a bevy of new bells and whistles. But while Wii Sports was forward-thinking in its ability to engage a different set of game players, Wii Sports Club is a clunky attempt to bring the title up to the standards of current games.

Wii Sports Club features the five original sports from its predecessor: Tennis, Bowling, Golf, Baseball, and Boxing. On a fundamental level, these play similarly to the original game, requiring the player to perform various motions to simulate the acts of swinging a racket, throwing a ball, or launching a punch. The Wii MotionPlus (or a Wii Remote with Wii MotionPlus built-in) is mandatory, and the additional range of gyroscopic control it provides adds a little bit more depth to these games: in Tennis, for example, it's a lot easier to control the type of swings you get than it was with the original Wii Remote, leading to greater control of the ball. Other games utilize the GamePad: in Golf, you position the GamePad on the floor, where it depicts the ball; you then swing the Wii Remote over the pad to hit the ball. Baseball lets you use the GamePad's gyroscopic features to pitch and catch the ball, which is a clever and fun new addition to the formula. For the most part, however, Wii Sports Club is all about that time-tested Wii Remote waggling.

Besides the main games, Wii Sports Club also features mini-games that put twists on the various sports, like launching a tennis ball to hit whack-a-mole targets, trying to bowl down unusual 100-pin patterns, and playing bingo by launching golf balls onto a grid. These games can be played solo or with friends (though not online), and make for a nice distraction if you get bored of the standard sports. These games are all quite short, however, so don't expect to be enthralled by them for very long.

One of the selling points of Wii Sports Club is its online features, and unfortunately, it's here where the collection falters the hardest. When you start the game, you're asked to join a regional "club" of your personal choosing. This isn't restricted by physical geography; I live in California, but I joined the Iowa club because I grew up in that state. You're supposed to socialize with other members of your club, forming friendships and rivalries with other territory clubs, but such socialization is uncommon because the online experience is simply not good at all.

For starters, online play is restricted to very basic rules for each sport, with only bowling featuring any sort of significant rule variations to choose from. Finding opponents is also a challenge. I'd log on during prime time in the evenings, weekends and weekdays, pick my sport of choice, and be sent to a practice room where I'd wait for an opponent for a few minutes before being told the game couldn't find anyone and I would be booted back to the menu. I had the most luck finding people to play Tennis, but trying to find a person to play 100-pin Bowling was like pulling teeth. Looking at the game's Miiverse, I saw plenty of folks discussing their online games with others, so why wasn't I getting any sporting funtimes?

It has much to do with the game's netcode. Wii Sports Club has serious, pervasive problems with lag and stuttering during games. Players in the Miiverse universally reported the same issues, making online play a bust. But beyond the online, how is Wii Sports Club at recapturing the magic of the original Wii Sports and getting non-typical players engaged in the game? I invited a few people I knew who aren't frequent game-players to partake in some virtual sporting with me. While they all seemed to enjoy the games--especially the new mini-games--the GamePad options proved troublesome. (There was a lot of worry about people and pets accidentally stepping on the controller during golf in particular.) There's simply no substantial improvement here--nothing to make the re-release a valuable upgrade over the original.

On top of everything is a rather confusing pricing structure: You can obtain the game as either a free download or in a retail package, but the downloadable version only lets you play for a limited time before you have to purchase a $1.99 24-hour "day pass" or unlimited access to individual sports for $9.99 each. The package version doesn't have any such restrictions, save for the minor inconvenience of having to take the disc in and out of the console, so why not offer a simple, full-access download version as well?

Wii Sports Club is emblematic of Nintendo's strange and silly approach to online games and distribution, given its unintuitive interface for finding sports partners, the consistently poor connection quality, and a pricing strategy that makes little sense. It works a lot better as a local game, but even then, it's not a massive improvement over the original title as a pick-up-and-play party pleaser. It's still great fun, particularly in short bursts, but it's hard to justify plunking down extra cash for Wii Sports Club. 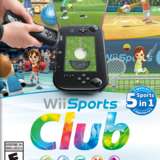 Wii Sports is the only game that practically everybody in Heidi Kemps' large extended family has played. She was eager to see if Wii Sports Club would forge that same connection. Alas... 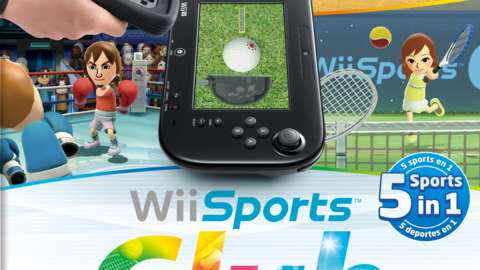 Wii Sports Club lets you play you favorite Wii Sports games on the Wii U console and take the competition online.