Who Wants To Be A Millionaire Third Edition Review

If you're into trivia games like You Don't Know Jack, you may get some mileage out of Who Wants To Be A Millionaire, but its uninteresting gameplay and methodical pacing make it practically a chore to play.

The third edition of Who Wants To Be A Millionaire takes the same exact engine that powered the last PlayStation version of the game, drops in a new set of questions, a smattering of new voice work from real-life show host Regis Philbin, and kicks it out the door and onto retail shelves. Like the first game, Third Edition--which is actually the second PlayStation release for the series--sticks to the show fairly faithfully, but extremely limited options, the inability to skip the lengthy between-question animation, and horrendously slow load times suck out any potential fun you might have with this game.

The first question that the game asks is how many players will be competing. You can play a two-player game, which sends the game into the fastest-finger round, where the two players must correctly order a list of items. The fastest sorter wins--which ends the other player's game and causes the game to proceed to the single-player game. While this is faithful to the way the show works, it makes the two-player portion of two-player games last about 15 seconds. Support for up to eight players here might have also added a bit of tension. A fastest-finger mode that lets you simply try the sorting challenges one after the next would have breathed a bit of life into the game.

For those unfamiliar with the TV show, Who Wants To Be A Millionaire is a multiple-choice quiz. Each question is worth progressively more and more money until you reach the final question, which is worth 1 million dollars. Of course, the questions get harder as you climb the ladder. To help out on harder questions, you're given three "lifelines." One eliminates two of the wrong answers from the list. Another polls the audience for the answer and gives you the results. The third lifeline is the ability to call one of your friends and ask him or her for help. However, this lifeline has changed a bit--instead, you have to call one of Regis' friends for advice.

The game looks a lot like the show does and tries to use some of the same sweeping camera movements that make the show stand out. However, the prerendered movies show empty chairs rather than render a polygonal Regis Philbin and a contestant character. Additionally, you can't skip these movies, and they slow the pace of the game down to a grinding halt. There's also a fair bit of loading throughout the game that--even with speed loading enabled on the PlayStation 2--is enough to make you want to simply give up.

If you're into trivia games like You Don't Know Jack, you may get some mileage out of Who Wants To Be A Millionaire, but its uninteresting gameplay and methodical pacing make it practically a chore to play. Only die-hard Regis Philbin fans (and we know you're out there, there's no use denying it) need apply. 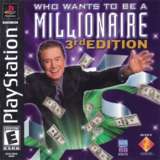 Who Wants to Be a Millionaire 3rd Edition
Follow