Whiteout's technical and creative deficiencies keep it from being recommendable to anyone.

Vicarious Visions has, over time, proven itself to be a fairly consistent producer of respectable video games. The real pinnacle for this New York development house has unquestionably been its uncanny interpretations of the Tony Hawk's Pro Skater games for the Game Boy Advance. Unfortunately, the latest offering from Vicarious Visions is certainly not the company's best work. Whiteout, a snowmobile racing game published by Konami, is a poorly conceived game that attempts to rely on the same merits that made EA Sports Big's SSX games so enjoyable, but without actually having those merits.

Whiteout is actually remarkably similar to Vicarious Visions' Polaris SnoCross for the original PlayStation. The core difference between Vicarious Visions' two snowmobile racing games is that Whiteout cribs shamelessly and often from SSX in terms of both aesthetics and gameplay. You have a basic trick system at your disposal, and using L1 or R1 in conjunction with the left analog stick will produce can-cans, supermans, and the like, though there's no real discernable difference between the tricks other than the animation. There's also the great equalizer, the turbo boost, which can be charged by pulling stunts and picking up boost power-ups on the track, though the game's blatant rubber-band AI will occasionally nullify any advantage this mechanic might provide.

Though there are five different modes of play in Whiteout, the action remains essentially the same throughout, with the basic objective of crossing the finish line first usually taking precedent. The career mode awards high placement in the race and tricks with cash, which can in turn be used to upgrade your snowmobile or buy an entirely new snowmobile. Of all the modes available, the career mode is the most firmly grounded in reality, though you'll still find that the track is littered with glowing, spinning power-ups. The arcade mode lacks the upgradeable snowmobiles but adds point bonuses to the power-ups available on the track, rings of fire that you'll have to clear, and secondary objectives like reaching point goals, clearing gaps, finding shortcuts, and so on. The two-player, time trial, and quick race modes pretty much explain themselves.

The gameplay modes are fairly standard, but the gameplay itself is slightly substandard. The AI exhibits two of the most abhorrent of racing AI traits: The aforementioned rubber-band effect, where racers will miraculously catch up to the leader regardless of the situation, and pack AI, where there's not enough variety between AI routines and everyone ends up going about the same speed along the same path, making the same mistakes. The handling of your own snowmobile feels imprecise and choppy, and your control over it is tenuous at best. The track designs are decent enough, though it can occasionally be unclear which direction you're supposed to be going, and all the tracks are modest in scope. So you'll find nothing here that stands up to the complex, sweeping track design of Whiteout's most obvious inspiration, SSX.

And even though the original SSX was one of the US launch titles for the PlayStation 2 over two years ago, every aspect of that game's presentation is far superior to Whiteout's presentation, which is just bad. The textures are unattractive, and while the rider models are passable, the animation is incredibly choppy. The special effects look cheap and cheesy, and some of them, like the blizzard effect, make for some simply staggering slowdown. The audio is dominated by the game's pair of commentators, who will call out every trick you pull off and comment on bails and changes in your race position. It's actually pretty spot-on in syncing up with the actual action, but the amount of speech is limited, and the color commentary is usually cringingly bad. There's also the licensed soundtrack--now a prerequisite for any action sports game--but there are only seven tracks in total, and they're all punk or metal.

Since Vicarious Visions has quality titles like the console ports of Jedi Knight II and the Game Boy Advance ports of the Tony Hawk games under its belt, it's sort of sad to see the developer's name attached to this poor excuse for a snowmobile game. Between Whiteout and Arctic Thunder, the options on modern consoles for fans of this little niche of racing are pretty grim indeed, and Whiteout's technical and creative deficiencies keep it from being recommendable to anyone. 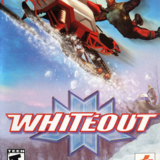 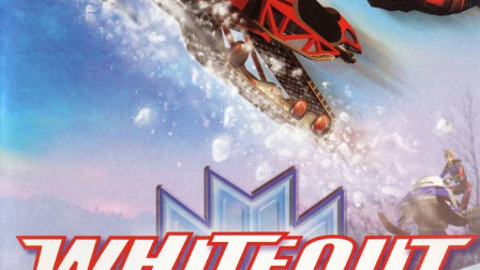 Whiteout's technical and creative deficiencies keep it from being recommendable to anyone.