Black, white, and dead all over.

A striking aesthetic can grab your attention, but a game needs more than looks if it's going to keep it. The noir-inspired White Night gets caught in a loop of offering more before taking it away, making for a horror experience that is sometimes wonderful, often lackluster, and frequently frustrating.

White Night is a horror story told in black and white. Set in the 1930s during the Great Depression, it's a noir tale that's part serial killer mystery, part supernatural ghost story. You break into a nearby house to look for help after being hobbled in a car crash. The game could be compared to Resident Evil largely due to its fixed camera angles, but you won't be shooting any monsters. Instead, you spend the majority of your time exploring the house and the mysteries it holds, all while intoning your thoughts in typically stilted and melodramatic noir fashion.

It is more adventure game than survival horror, though one element of White Night that stays true to the survival horror genre is item management; specifically, you collect matchsticks, which are your only source of light for most of the game. Matchbooks can be found littered liberally throughout the house, but you can only hold a handful of them at a time. They burn out quickly, making your stock of them something you always want to keep an eye on. If you're caught in the dark for too long, you're dead.

Matchstick management is one of several examples of good ideas in White Night that often go wrong. Matchsticks are perfect for mood lighting, and using your supply provides good tension, but their implementation can be frustrating. For one thing, many actions in the game (including saving, which is done manually by sitting in a well-lit armchair) require you to put your match out. Just lit your next-to-last match? Sorry: you've got to extinguish it if you want to open a chest to get the items inside.

On random occasions, your matches also fail when you try to light them. Sure, there's some realism to this, and there's something horror movie-esque about desperately trying to strike a match that won't light, but when you're forced to replay sections of the game because two of your four remaining matches ran out and you got stuck in a dark room, this isn’t moody--it’s annoying.

White Night's fixed camera angles are similarly hit-and-miss. While they provide a more cinematic look, they don't play well with the two-tone look of the game. There isn't much detail to the game's black and white environments--your character notices a statue’s hand protruding from the ground, but you could never yourself tell based on the smudge of black and white that depicts it--and thus, it can sometimes be hard to get a great sense of your surroundings when the camera switches from one angle to another. What begins as a striking look becomes a tedious visual obstacle.

This is most evident--and most upsetting--when you're running away from danger. There's no combat in White Night, but there is an antagonist: a woman who manifests herself as several ghosts that can kill you if you touch them. A ghost can only be harmed by electric light (which is why they break the house's lights at every opportunity), so you spend most of your time trying to avoid them. At times, this system functions well enough. Other times, it's frustrating. You often have to weave your way through several ghosts to reach your destination, and you may find yourself running the wrong way after the camera changes on you--that is, if you're not already caught in the geometry of the environment.

Your ability to save only in select corners of select rooms (with a few, story-determined exceptions) leads to tedious scenarios in which you know exactly where you need to go and what you need to do, but you have to retry the same sections over and over again because you keep getting caught heading from one save point to another. On the upside, the ghosts are appropriately creepy--they are unsettling images that don’t rely on cheap tricks, like loud noises, to induce jump scares. But your fear of the ghosts evaporates the more times they catch you, because the death sequence isn't horrifying; it's just a path to your most recent save.

Despite its faults, the methodical exploration of the house is typically satisfying. When you're given room to breathe and you can simply poke around, White Night is an intriguing adventure game. Most of the puzzles are simple to solve and aren’t annoyingly convoluted. When you do find yourself stuck, useful hints can be found in the in-game newspaper (which is really more of a journal), and the main character himself will ponder possible solutions if you wander aimlessly for too long. The game's story is something of a saving grace, most of the time. Told mostly through collectible diaries, letters, and newspaper articles scattered throughout the house, the tale of White Night's main characters comes together well. Unfortunately, the game comes to a predictable conclusion, and the dialogue occasionally drifts into tangents that try to convey a deeper meaning than they can actually accomplish.

White Night has other minor issues, such as its lack of a useful map, but these flaws stand out primarily because of the possibilities the game never realizes. But there are frightful joys to uncover, nonetheless. There were numerous moments when I was exploring the environment, reading the back story, and solving the puzzles, that I enjoyed myself. I wanted to find the next journal entry and see how the story ended, and at times (particularly early on), I was genuinely creeped out by the atmosphere. The pieces that make up White Night could have added up to a great interactive horror story. Sadly, the good game you can imagine is stuck lurking in the shadows of the game it became. 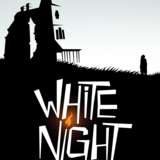 Britton Peele is afraid of being alone in the dark, and he's smart enough to keep a flashlight handy instead of relying on matchsticks. He finished White Night after seven hours of play time, gathering most of the collectibles along the way.