UK REVIEW--Fifty hours into White Knight Chronicles II, you finally gain access to the gear you've been aiming for. That might seem like a high figure, but for a game so steeped in massively multiplayer online principles, it's a drop in the ocean. This sequel is definitely an improvement over the original White Knight Chronicles, but it takes a long time to find out exactly why. It's still the same, slightly incongruous blend of online and offline play, with the former far more enjoyable than the latter. There's an air of stubbornness to the game; rather than changing things up, elements have been polished and tweaked. These improvements may not win over anyone who disliked the original, but they certainly make things better for those already invested or toying with the idea of stepping into the White Knight's shoes.

White Knight Chronicles II opens with a brief section in which you play as mysterious knight Scardigne before returning to Leonard and friends, who are the heroes from the first game. There's no attempt at a tutorial. It's just you, a menu screen, and hundreds of skill points to dish out and moves to select. Rather than being its own thing, White Knight Chronicles II is very much the second half of one game. It's hardly surprising that there's a remastered version of the original White Knight Chronicles on the disc that has been overhauled with the sequel's improved battle system. There's no benefit in diving straight into the sequel. Playing the remastered original allows you to just carry on through, and there's also the option to import your save from the original. Importing resets your character level to 35--a bugbear for those who spent hundreds of hours reaching a high level, but it's an understandable decision.

For the most part, White Knight Chronicles II focuses on grinding, farming, collecting and stomping around as a giant robotlike Incorruptus. It's the kind of role-playing game that requires hundreds of hours of time and patience, with the process of gaining better equipment and items a slow one. The plot begins one year from the events of the first game, with the heroes attempting to foil the rise of the decidedly evil Yshrenian Empire. It's a throwaway, forgettable tale, which by the end has suffered so many needless twists and turns that it's reminiscent of one of the game's labyrinthine dungeons. Somehow it manages to be even less exciting than the original, although once again, it picks up quite a bit toward the end. Leonard and company haven't really improved either. The characters are still charmless, poorly voiced nonentities. The most interesting character is the one you create, who doesn't even talk.

Thankfully, the battle system this time around is considerably improved. Numerous subtle tweaks have been made since the original release, many of which aren't immediately apparent but come together to form a more engaging experience. The game plays out in real time, and you can move around the battlefield. Commands are issued from a set of menus and take time to prepare based on your armour/equipment weight. Being able to launch your first attack instantly now, as opposed to waiting for the gauge to charge, helps the combat pacing. Having to be conscious of distance--because attack damage can vary depending on how far you are from a foe--adds a more interactive element to the usual menu-based system. Switching to the Incorruptus is also a more interesting affair this time. You end up with four different giant knights in your party, and transforming characters into their Incorruptus can be the turning point in a battle. Added for the sequel is a turn break, which is a powerful interrupt attack that stops enemies from using the current ability they're charging. The regular moves are improved too, adding a bunch of new attacks to spend your skill points on and offering more varied visual feedback. With a few exceptions, every character can be equipped with any build, and the level of customization is impressive. You can set a character up to be anything from an elemental magic-using spear-wielder to a healer who also bashes things with a giant hammer.

Even with the improvements, it's still slow going at times. Your AI companions fluctuate between competent and utterly useless, although they thankfully favour the former option. Even so, it can be annoying when, despite setting your healer's tactics to "heal first," she dives in to whack a powerful enemy with a staff when the rest of the team is on the verge of death. Trying to hold out against a giant foe (of which there are many) while you wait for your Incorruptus to charge can be a pain, especially when turning the next corner can lead to yet another giant dragon or spider. As in the original, some enemies have vast health bars and don't fall easily. The difficulty has been significantly increased with the odd spike that, while occasionally feeling unfair, offers a far more interesting challenge than its precursor. When you're unable to use any of the knights later in the game, battles become very tactical and require careful planning. It's a particularly fun section, despite your loss of abilities, when evasion and avoidance become equally as important as felling foes. Also enjoyable are the new bounties, which are optional boss fights that can be activated at any guild store. Rewards for these range from cash and superior armor to weapons and items.

Less fun is the dungeon design. Most are just as confusing and awkward to navigate as those in the first game. This is partly because, aside from a handful of areas, they're the same dungeons. The majority of the game takes place in areas you may have already seen before numerous times. It doesn't help that many doors are arbitrarily sealed off, forcing you to find obscure and awkward routes through the twisting corridors. Sometimes you find yourself heading toward a location only to discover a locked door, unmarked on the map, which leads to some major backtracking. It's a testament to the generic nature of the soundtrack that, despite so many repeat visits, the score is almost totally forgettable. The various dungeons are nice to look at, though, even if the visuals haven't received much of an overhaul from White Knight Chronicles. One new area in particular, the Van Haven Wastes, is especially evocative; a moody sunset cast over plains that dip into subterranean caves and lakes. Character models are still pretty basic, but the Incorruptus designs make up for that, looking like mechs that have found their way into a medieval prop department.

It's strange that a game with such a rigid, mandatory single-player component is only really at its best in multiplayer. Accessing the game's online section--the GeoNet--changes things somewhat. Here, the single player's reliance on grinding and collecting becomes a strength. Quests can be purchased based on your guild rank, which can be raised by completing quests solo or in multiplayer or by performing errands for non-player characters in single-player. These errands generally involve running from one NPC to another and are somewhat tedious, although the guild point rewards can be massively helpful in boosting your rank. It's far more fun when you head online with friends, completing quests that now allow up to six people to play. As with everything in the game, it takes time, with some of the later quests costing large amounts of money and requiring an extremely high guild rank, so to see everything, you have to invest countless hours in it. The slow trickle of rewards make it compelling, with progress far more visible and apparent than when playing alone. What can seem like a chore in single-player becomes a fun, social adventure with other people. While it's a shame the multiplayer is so reliant on the single-player, it's easy to break up the monotony by diving online, doing a few quests to earn money and resources, and then heading back in refreshed.

You also have the option to create a Georama, which is your own town that can be themed and arranged in a variety of ways. Again, this is something that doesn't show its true potential until you pour a lot of time and currency into it. Once you do, having a social hub, a resource farm, and a shopping district all accessible from any save point is extremely welcome. As in earlier Level 5 RPGs, such as Dark Cloud and Dark Chronicle, buildings can be placed around the town, adding a neat micromanagement touch. Villagers can be recruited from the single-player mode that will then move into your village and provide boosts to certain types of resources or crafting materials, which is essential for accessing the best equipment and items. You can now take an Incorruptus online too, once you earn it during the story. To fully kit out this knight takes a vast amount of work, with numerous side quests dedicated to unlocking different parts and things, like new paint, becoming available as you reach guild ranks in the 20s. While an online Incorruptus doesn't offer any surprises, it does allow for more variety, with certain quests that would be far too difficult if characters could only stay in human form.

The main requirements for enjoying White Knight Chronicles II are time and dedication. It's a game that requires a massive investment. It has very little to offer if you're after a quick jaunt through a gripping story, but as a social multiplayer RPG, it's good and improves the more you play. It's a shame that the single-player feels like something to get out the way and be done with, and too often, it threatens to try your patience. But beneath the somewhat charmless exterior, there's a lot to enjoy. With both games on the disc and a multiplayer component that that can conceivably offer hundreds of hours of adventuring, this is a decent package for those new to the series. While owners of the original may feel shortchanged at the lack of new areas, the combat improvements and increased difficulty make up for it. White Knight Chronicles II is a game with a lot of value, but it's one that demands a large amount of effort before it shows its riches. 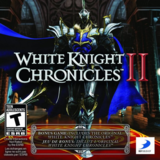