In Whispers of a Machine, a retro-styled point-and-click adventure, interesting themes and mechanical elements relating to human augmentation are stapled onto a recognizable framework. Your character, murder investigator Vera Englund, has access to cybernetically augmented abilities thanks to some neat future-science, and she can do things like perform biometric readings of the folks she is interviewing to pick up on anomalies in their heart rate and composition, conduct forensic scans over environments to pick up on potentially vital information for her investigation, and increase her strength for moments where brute force is necessary.

But it's not a game that dives deep into the nature of augmentation, or which uses augmentation for most of its puzzles. Because of this, the game ultimately doesn't quite live up to the full potential of its premise. Regardless, it's easy to appreciate Whispers of a Machine for what it is--a damn good point-and-click adventure with a lot of unique, interesting ideas.

Throughout Whispers of a Machine, there are decisions you can make during dialogue and puzzles that are tied to one of three different styles of approach: empathetic, analytical, or assertive, and following each one of these will lead to different outcomes later on down the line. During dialogue, you're typically given these three choices of response, and although they're not labeled, it's usually clear which approach each one matches to. Cleverly, the puzzles that track these choices don't explicitly signpost the fact that there are multiple solutions, meaning that the game will, on occasion, track a decision that is perhaps closer to your natural instinct than any intentional roleplaying you're doing. In one early example, it’s not entirely clear that there’s more than one way to get a vent open, but the game will remember which methodology you arrive at and whether you seek help from others or find a way to get it opened yourself.

The broad plot remains largely the same regardless of how you play. At the game's opening, Vera is sent to investigate a murder in Nordsund, a small, quiet town that sits atop a giant spire, isolated from the abandoned roads and wasteland below. The lore of both the city and the larger game world are slowly unfurled over the course of the story. Whispers of a Machine is set in a near-future following "The Collapse," a cataclysmic event that you learn more about as you play. A.I. is outlawed, while augmentation allows humans in certain occupations to excel, but taking the "blue" that is essential to keep your augmentations working comes at a heavy mental cost.

Nordsund, the locals assure you, is not the sort of city where people get murdered--and yet by the time Vera arrives, a second murder has already been committed. It's up to Vera to find the link between the victims, identify their killer, and, inevitably, deal with the larger conflict that has spawned this violence. Getting to the bottom of this means investigating the town and getting to know several of its citizens. Nordsund is grimy and cramped, sparsely populated and made up of garbage dumps, poorly assembled shacks, repurposed buildings, and elevators that never seem to work.

The murder plot ends up drawing Vera into a much larger investigation into warring political and ideological factions, ultimately leading to a conclusion that sees Vera grappling with issues from her own past (and a few potential endings, depending on your choices). The story is well told, unveiling new details and character beats at a steady pace throughout, offering up a good mix of foreshadowing and red herrings to keep you on your toes. The lore underpinning it all isn't anything too exciting, though--there are a lot of standard science-fiction tropes revisited, and the game ultimately doesn't have a lot to say about its own A.I. apocalypse beyond the fact that it happened. But Vera is a likable protagonist with a compelling backstory, and the game's small cast is eclectic and brought to life by some great vocal performances.

Your choices will dictate which augmentations you can unlock. If you respond empathetically to the game's cast during the first day of your investigation, for instance, on the second day you'll unlock the ability to energise machines, objects, and people with a little jolt; if you were purely analytical in your approach to puzzles and conversations, though, you'll be gifted with enhanced sight, while assertive players will be given an amnesia ability to affect their target's memories. Depending on which powers you unlock, the solutions that are available to you for certain puzzles later in the game will change completely, essentially creating ‘new’ puzzles. A second playthrough in which you make different choices will only differ at a handful of points, but these unlockable powers are fun to test out and discover the limits of, even though each one is only really used a few times.

The puzzles are, for the most part, smart and engaging. Your ability to progress is tied not just to how you reason through a situation, but to how much attention you've been paying to the evidence and the key locations around town. The payoff for remembering a detail from earlier in the game can be great--one late puzzle, for instance, is reliant on recognizing a certain sound in the background of a cassette tape found near the game's beginning.

Using Vera’s augmentations to progress makes for an interesting dynamic, too--remembering that you can access her augmented strength or scan the environment for DNA samples is empowering, but the game never loses sight of Vera’s character, or her skills for deduction and reasoning, underneath these powers. There are very few puzzles that you could accuse of being obtuse; there's one that is perhaps a little too outside-the-box, but it's not so wild that it requires random guesswork. Getting to know Nordsund is a pleasure, and when you finish the game--which is unlikely to take longer than about five hours--it's easy to feel a little sad about needing to leave a place that, for all its grim-future grime, was interesting.

Despite having big ideas, Whispers of a Machine is ultimately a traditional example of the genre with some neat ideas rather than something revelatory. But it's very good at what it does, and those augmentations help to differentiate it from all the other adventure games out there. It's short but gripping, offering a well-written, interesting and clever experience that wraps up well and which rewards your choices and play style with unique powers and puzzle solutions. 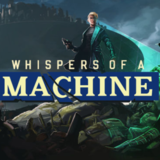 James O'Connor spent about five and a half hours finishing Whispers of a Machine, and a few more revisiting to test out different powers. His favorite modern AGS title is probably still Resonance.