If it weren't for that silly earthquake thing, Wetrix+ could have been a great puzzle game.

It's very difficult to make a new, exciting puzzle game these days. The most addictive games are usually variants of the "blocks dropping into a well" theme. Wetrix+, at its core, has a lot of block-dropping going on, but the game hides it well enough to make it feel totally different. However, there's one fatal flaw that really keeps the game from reaching that Tetris-like plateau.

You start the game with a flat 3D surface, and then the blocks begin to fall. The object is to build large, enclosed areas because after several large blocks fall, water will begin to drop onto your playfield. You want as little water to fall off your platform as possible, so you'll have to build a collection of lakes to store the water. Fireballs will allow you to dry up a lake, and bombs will blow a large hole in your playfield, which you'll have to repair quickly to keep the water from draining. Later, ice cubes will cause your lakes to freeze. This all sounds fine and good, and the game is indeed fun, but there's one more facet of the game, which manages to really mess things up. That something is the earthquake meter. As you build your walls higher and higher to store more water, this earthquake meter builds. If your walls get too high, the earthquake hits, destroying your carefully built reservoir and, unless you're quick and lucky, ending your game. While the need for something to balance the game is obvious (otherwise you could just build up huge walls around the edges of your playfield and play the game forever), the earthquake simply isn't it.

The graphics get the job done, and the water effects are really pretty. The soundtrack is filled with peppy techno numbers that fit the action pretty well, and the electronic voice that reports information like how many lakes you currently have is cool. There are a few different camera angles, but none of them are particularly more or less useful than the default view.

If it weren't for that silly earthquake thing, Wetrix+ could have been a great puzzle game. It has different modes, including multiplayer options, and all the bells and whistles you could ever want in a puzzle game. But the earthquake really prevents the game from reaching its full potential. Still, considering the Dreamcast's lack of domestic puzzle games, Wetrix+ fills a gap, and puzzle fans should at least check it out. 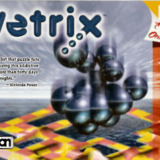