What We Ski lacks in high-speed thrills it makes up for with varied challenges, charming visuals, and a great control scheme.

If you've come here hoping for confirmation that snowboards are featured in Namco Bandai's latest Wii offering you're out of luck, because they're not. If you're here looking for an entertaining and accessible skiing game, however, then you've come to the right place. We Ski affords you unlimited access to the large Happy Ski Resort from the get-go, and while the game's unusual controls definitely take some getting used to, the various events and challenges that litter the resort's slopes are well worth the effort.

Before hitting the slopes you need to choose a character for yourself. There are well over 200 wannabe skiers on the game's roster, or you can use a Mii if you prefer. It's unfortunate that you can't equip hats or goggles if you opt to ski as a Mii, but the same is also true of some of the premade characters, and you're unlikely to miss the option until late in the game when you unlock "special" outfits that incorporate headgear. Next, you should pay a visit to the ski school, which, despite taking an unnecessarily long time to play through, does an excellent job of familiarizing you with the controls necessary to snow plow, slalom, and stop without the aid of a tree. Advanced lessons teach you how to perform air tricks, but these can be learned just as easily from characters that you encounter on the Happy Ski Resort slopes later on.

Regardless of whether or not you're playing with a Wii Balance Board (which can only be used to turn left and right--you can't control your speed the way you can in Wii Fit's skiing exercises), you'll need both a Wii Remote and a Nunchuk to play We Ski. For the most part you can think of these as the handles on your ski poles; you move them up and down to dig your poles into the ground and skate along flat areas, you rotate them to tuck the poles under your skier's arms and adopt a crouching position, and when you're not using the aforementioned Wii Fit peripheral, you angle them to the left or the right to turn. Buttons are needed to snow plow and to navigate moguls, and using the control stick is the easiest way to stop, but save for those few functions and some of the more advanced air tricks, you can get from the top of Lion Peak down to the bottom of Rabbit Road using nothing but hand gestures. It's a great setup once you get the hang of it, and it's unfortunate that the Balance Board functionality is so rudimentary.

With one perilous exception, all of the resort's 14 courses are classified as either beginner, intermediate, advanced, or as being designed solely for air tricks. Every course brings something different to the table, whether it's narrow winding corners, an especially icy surface, or scattered trees. What all of the courses have in common is that you're never the only person skiing on them. Other skiers not only make great obstacles but, when you see them standing around with yellow icons floating above their heads, they also have challenges for you. There are over 150 challenges in total, including trivia questions, food delivery runs, rescue missions, and more conventional elements like races, slaloms, and mogul tournaments. It'll be a while before any of these are genuinely challenging, but that's largely because the learning curve is so good that you're rarely asked to do anything that previous challenges haven't prepared you for. It's also because, trivia questions aside, We Ski is a mostly easy game. In fact, scouring the mountain in search of characters that have tasks for you will often take longer than it does to complete them.

Fortunately, time spent exploring the slopes is rarely wasted. Your performance is graded every time you complete a course, you can get your photo taken and added to your Wii's bulletin board any time you encounter a photographer, and animal lovers will give you cryptic clues as to where you can find the resort's elusive wildlife. Incidentally, the availability of these extras varies depending on whether you're skiing at night or during the day, but the only other differences between day and night are visual--occasionally making the latter a little more difficult.

Skiing with friends can make aimlessly navigating the slopes a little more interesting, and if you happen upon any challenges you can progress through the game exactly as you would playing solo. We Ski supports up to four players in split-screen mode, though even when there are only two of you playing the frame rate can go downhill fast if the slopes get busy. Some of the challenges are more difficult to complete when your view is restricted in split-screen mode and there are other players to bump into, while others are made much easier by the presence of additional players who can work alongside you to achieve a common goal. If your friends prefer competing in traditional events to exploring the resort, any races, slaloms, and mogul competitions that you've unlocked can be replayed at any time via the main menu. They're fun for a while, but they get repetitive more quickly than the other challenges that you find on the mountain because they're short, there aren't many of them, and only the slaloms offer any significant variety.

While challenges are scattered all over the resort, most of them can be found close to the ski lifts where groups of skiers congregate. These locations are generally the only place that you get to hear anything other than the occasional "swoosh" noises of your skis and the irritating gibberish that serves as character speech, since the lift stations are equipped with speakers. Occasional announcements about missing children and badly parked vehicles are a nice touch, but it's the soundtrack that will make you smile if you're a fan of previous Namco Bandai offerings, since it's composed of theme tunes from the likes of Pac-Man and Katamari Damacy.

We Ski isn't a game that will satiate your need for high-speed thrills, over-the-top stunts, and fierce competition. Rather, it's a relatively sedate game in which you can have fun exploring, taking part in friendly contests, running errands for other skiers, and posing for photos. If that's something that appeals to you, then the Happy Ski Resort is definitely somewhere you should plan on visiting. 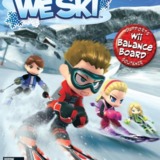