We Are Doomed Review

The best twin stick shooters turn tension and survival into an accessible kind of thrill. There's something inherently satisfying about flying around and avoiding being hit as you shoot at the increasingly numerous ships. Threading the needle with your ship as you narrowly cut through a tight blob of enemies is exhilarating, and the sheer act of moving the other joystick in order to fire your weapon makes the barrier to entry almost nonexistent. Because of the simple concept and ease of playability, twin stick shooters occupy a flexible design space, one that can hold any number of new ideas and concepts effortlessly. Unfortunately, while We Are Doomed gets what's so appealing about the genre and applies it to make a satisfying shooter in its own right, it fails to justify its existence, thanks to a lack of new ideas and predictable enemy placement.

We Are Doomed makes an excellent first impression, thanks to its striking audiovisual presentation. The enemies and animations all combine to form the same kind of strikingly jagged, abstract aesthetic that was featured in Everyday Shooter, while the music and backgrounds grant a trippy touch of synesthesia similar to what you'd find in a Jeff Minter game. And though We Are Doomed only ever features one aesthetic tone, it fuses with the game's mechanics and progression in small, smart ways. The swirling pink and purple of the main stage juxtaposes with the level's boundaries, which are marked by a starry, spacy backdrop. When you clear a wave, the pinkness wipes away for a moment as space engulfs it before it returns to deliver a new round of foes to clear. Your laser weapon looks big and powerful, almost as if it's ripping at the edges.

Movement is as smooth and effortless as a twin stick shooter should be, and enemies are clearly visible. It's easy to learn their particular patterns quickly (though many just bimble around aimlessly). But most importantly, shooting things feels good. The giant beam not only looks impressive, but it feels powerful when you're slicing through enemies. You don't immediately destroy them when they touch your beam, as they can withstand maybe half a second of direct exposure, but you can feel that resistance as you wait for the moment when they break, and that makes the moment of destruction all the more satisfying. The superbeam is the satisfying pinnacle of the action, letting you fire an even longer, more powerful version of your beam for a short time. The superbeam feels amazing, since the resistance you felt from the vanilla beam disappears when you cut through entire blobs of foes as if they were butter.

We Are Doomed's bells and whistles are silenced, however, when you look past its presentation. The game can be played in an endless mode or in a finite waves mode that features thirty scripted waves of enemies to survive. It features only one weapon: A beam that constantly protrudes from your ship, but only reaches so far, like a lance. Gathering flashing cubes increases your score modifier, and also grants you access to the superbeam. And that's it. You get no alternate weapons beyond the beam, no smart bombs that let you relieve the pressure when you're about to get overwhelmed, and no other fancy options in your bag of tricks. Though there is some charm in the challenge of playing with a limited toolset, here it makes for a flat experience. All you're doing is carving through swarms of enemies in one specific way each and every time.

The big problem with We Are Doomed is how much it limits itself to its detriment. Not only do you get only one weapon, but the game also does nothing interesting with the environment or enemies. You end up shooting things like tiny squids, triangular missiles, and giant disco ball-like circles, but all they do is try to bump into you or shoot you. We Are Doomed features some non-enemy threats, but they also fall under the banner of ramming or shooting. There's so much potential for a wide variety of different encounters. Even genre stalwart Geometry Wars employed devices such as the black holes that messed with the gravity of the playing field. But We Are Doomed is unfortunately content merely to crowd you until you die.

That's the frustrating thing about We Are Doomed: Despite all these issues, you can have fun with it. Because Vertex Pop took so much care in making everything feel right, nothing gets in the way of your enjoyment. You'll still remember the near-deaths you deftly flew your way out of. You'll still panic as the blobs of enemies cluster in and choke every available escape route until there's nothing but death left. And you'll remember the elation when you clear all thirty waves. The problem is that you can get those exact experiences and more elsewhere, whereas We Are Doomed doesn't really care to stake its own claim in the crowded shooter space. You're not going to see the surprising environmental twists of the Geometry Wars games or the charming DIY spirit of Everyday Shooter. In reality, you're just playing Twin Stick Shooter: The Game.

Even a solid game needs some spice, and We Are Doomed never gives you much. You will certainly notice how good it feels to play the game, and the presentation is top notch, but it never really gives you a reason to care. Sure, you're thrown a bunch of stages including about seven different enemy types, but when the bump and shoot behaviors wear thin, you aren't left with anything more to look forward to. Soon, the only thing that's doomed is your waning interest.

View Comments (21)
Back To Top
5
Mediocre
About GameSpot Reviews 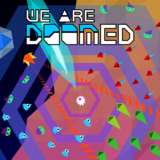 Jeremy Signor is terrible at twin stick shooters, but managed to beat the game in relatively short order. You probably can beat it in actual short order, though.