Until now, all the WCW-licensed games on the N64 have been based on a Japanese engine used by Asmik in a couple of overseas wrestling games. These games have been tolerable from a gameplay standpoint, but none of them ever really captured the look or feel of actual WCW wrestling. Meanwhile, PlayStation owners have been getting WCW games that look a bit more like the real thing, but the gameplay has been atrociously bad. Now, N64 owners can experience the weak gameplay of the PlayStation WCW games mixed with a bit of the real look and feel of the PlayStation games, though the inadequate storage space of the N64 cartridge keeps some of the atmosphere out of the game.

This is essentially a slightly updated version of the WCW Nitro that appeared on the PlayStation. The gameplay remains the same, but the roster has been updated, and wrestlers like Bill Goldberg have been added to the lineup. Gone from the original are the short taunt videos, which, by the way, were the best thing about the PlayStation version of the game. Also gone from the original are the poorly pixelated character graphics. Here, the wrestler models are very sharp, though the skin textures look quite bad. The crowd also looks really, really terrible. The game moves a lot quicker than the PlayStation version, but this gives the game a really strange look - it seems as though the motion-captured animation is simply running too fast.

For those unfamiliar with the original version of the game, Nitro eschews the tie-up system of gameplay used by previous WCW games, as well as WWF Warzone, for a different, move-based style. Instead of tying up and pounding buttons to pull off moves, you execute the moves via a series of button presses. When this game came out for the PlayStation, it was nice to see someone trying something new in wrestling games, even if it wasn't too spectacular. But now that THQ has milked this style of gameplay for three games, it's way past its prime.

Gameplay modes include the standard championship, which pits you against ten different opponents, one at a time. Win and you're the champion. Lose and you'll get to continue. There's also a tag-team mode and a battle royal, which forces you to toss your opponents over the top rope to eliminate them.

WCW Nitro is just a rehash of the PlayStation version, only it's about a year too late. It may have worked as a simultaneous release, but now the game is just plain bad. Even roster updates can't save it from its horrible gameplay and shoddy appearance. Let's hope EA can put out a decent WCW-licensed wrestling game when it takes over the license later this year. 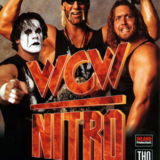