WCW Mayhem marks a respectable entry for EA into the realm of handheld wrestling titles.

The field of handheld wrestling games is rife with rehashed, utterly poor sequels. Oddly enough, Electronic Arts' first foray into the Game Boy Color happens to be a wrestling game, WCW Mayhem. Thankfully, the game's pretty darn decent, and it's not just another rehash.

As in other GBC wrestling titles, Mayhem's feature set is short and to the point. You can control one of 11 wrestlers in a "quest for the best" route to the title, take them on in one-on-one fashion, or play against a human opponent in versus mode. Options such as cage match or create-a-player are nowhere to be found. Once you've chosen from the likes of Sting, Hollywood Hogan, Booker T, Bret Hart, and others, it's time to enter the ring for some mat-tastic wrestling action. A is punch, B is kick, and various combinations let you grapple and perform takedowns. The response is fast, special moves are easy to do, and the computer rarely makes you feel helpless. When battling in the ring gets boring, you can take things into the locker room or back alley as well. This adds entertainment to the game, especially since there's only one arena to battle in. As a single-player game, Mayhem gets old after a short time, limiting it to quick spurts of gaming. For a two-player game though, the game's frenetic button-mashing and constant reversals make for an adrenaline-packed experience.

Visually speaking, Mayhem isn't a masterpiece, but it is executed well. There is only one arena, but it's nicely colored, it flows with spectators, and it gives off a decent feeling of 3D. It's silly that handheld wrestling games continue to lack a greater variety of arenas, but at least EA made an effort to break the monotony with the locker room and alleyway settings. Character sprites are drawn cartoonish, albeit in only four or five colors, with an animation level at least twice that of Acclaim's ECW Hardcore Revolution. Still, while the wrestlers look and move decently, there's just something a bit too cartoony about everything. Truthfully, WCW Mayhem's graphics represent the pinnacle of GBC wrestling games, which is a sad statement, in that there's much room for improvement.

While Mayhem's gameplay, control, and visuals are worthy of above-average marks, the game's audio experience is enough to incite this rotund reviewer to fits of rage. Is there some rule that says handheld wrestling games can only have two music tracks? There must be, because WCW Mayhem continues the tradition. The background tracks are nice and upbeat, but who wants to listen to the same track for 11 matches, then a second one at the end? In regard to its effects, the game at least turns in a respectable showing. Punches and kicks land with the best "thud" noise the GBC speaker can produce, while a variety of crash and explosion sounds launch from the system whenever a special move is performed. There are also a few sampled sound snippets, the most notable being the crowd noise before the round starts and the ref's cry of "1-2-3" during a pin. While EA has at least tripled the number of effects over Acclaim's ECW Hardcore Revolution, more detail in the sound department would have been nice.

WCW Mayhem marks a respectable entry for EA into the realm of handheld wrestling titles. While a great deal needs improvement, the company has easily turned out the best GBC wrasslin' title to date. Furthermore, since the game has a more well-known license, featuring the likes of Hollywood Hogan and Goldberg, the excitement level is also a cut above the rest. 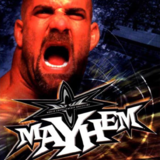 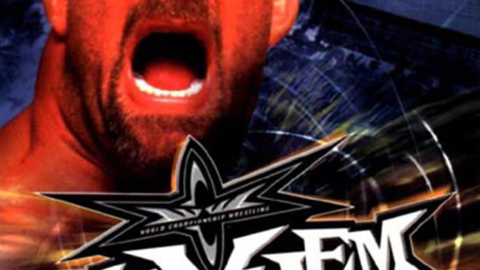