Wayne Gretzky for the Nintendo 64 is one incredible title.

The hockey players, ice rink, and arenas were created with motion capture, 3-D animation, and texture mapping. The Nintendo 64's processing power also means that this game can deliver huge, real-time polygonal characters. The players were created as individual 3-D models to provide each with independent movement. The result is that each player has a lifelike look and feel, right down to his uniform and facial details (some players even have missing teeth)! Wayne Gretzky was personally involved in the design and mechanics of the game, and Gretzky's own style has been digitized to reflect real skating motions and competitive hockey moves. The final result is a very realistic sports environment with fast, smooth, and at times breath-taking, action.

While it's possible to set the game on simulation mode and play a real five-on-five game of hockey (where injuries and penalties are taken into account), that's not where this game shines. That is to say, after playing a few games in arcade mode, it becomes clear that Wayne Gretzky's 3D Hockey wasn't designed to be a simulation hockey game. Think of this game as NBA Jam on ice. Speed trails and goalies turning into brick walls make their appearance. Charged-up slapshots, complete with a flaming puck, cause the net to erupt into flames. Blast a screamer straight at the goalie and he slams into the net and into the boards. And what's a hockey game without a bench-clearing fight? Gretzky allows players to throw hook shots and jabs, and grab an opponent's jersey to smack him around a few times. There are even Mortal Kombat-style finishing moves. This isn't a realistic hockey simulation; this is total arcade action.

Control is not an issue with this game: It's basic and effective. And like all good sports titles, it's possible to customize the controller and utilize options. Players can determine difficulty settings, period length, penalties on/off, fighting on/off, sound test, music test, and the like. Gretzky supports up to five-on-five player games, using any combination of real players or CPU, and offers three NHL stars from each NHL team. And starting a multiplayer game within Gretzky is not a problem, thanks to the 64's four available controller ports. The action camera scrolls at an incredible 60 frames per second, which means zooming and panning is effortless: Players won't miss any of the key shots or killer body checks.

The audio quality in Gretzky will impress even the harshest of critics. The organ music, goal siren, and other arena sound effects are authentic. The sports announcer, however, is one of this game's few downfalls. He's only capable of the usual requisite hockey speak - "Great shot!" "What a save!" "Incredible!" "That's gotta hurt!" The announcer's unoriginality and repetition quickly make his play-by-play an unwelcome and tedious aspect of this title.

Wayne Gretzky for the Nintendo 64 is one incredible title. No more slower frame rates, small players, and limited perspectives: 64-bit action is here and boy what fun it is. 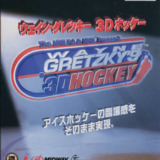 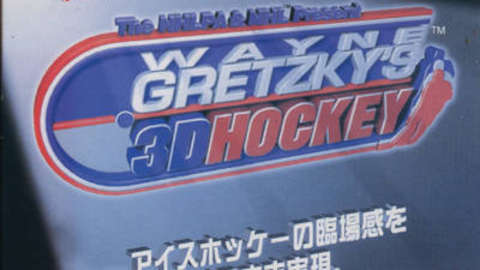 Wayne Gretzky for the Nintendo 64 is one incredible title.