The release of the original Wave Race for the Nintendo 64 was noteworthy for a number of reasons, but none more obvious than the fact that the game became a blueprint, which nearly all other developers would use in constructing their own jet-ski-based racing, or similarly themed, games. As expected, Wave Rally incorporates features that have become standard in these types of games, but the development team at Opus has done its best to set Wave Rally apart from past and present jet-ski racers by including some new features--the ability to select between two different types of craft, as well as a freestyle mode that rates your trick ability based on several criteria. Wave Rally also has the distinct honor of being one of the first jet-ski games on the PlayStation 2 to incorporate a substantial wave feature in which wave height and frequency can change dramatically depending on the course. However, these achievements and additions are ultimately overshadowed by stiff controls, some questionable AI, and other quirks that ruin an otherwise entertaining experience.

Wave Rally includes five different modes--arcade, championship, time trial, freestyle, and two-player split-screen. The arcade and championship modes are basically similar, as they give prerequisites--or, more specifically, what place you have to finish in---for proceeding on to the next course. In the arcade mode, you have to worry about reaching checkpoints scattered across the course to prevent time from running out and ending the race. You won't have to race against the clock in championship mode, but the number of rounds (courses) double in the amateur mode and triples in the professional mode.

While the arcade mode doesn't have any particular problems, the structure of the championship mode can be a little frustrating. At the end of each race, you receive points based on your finish, with first place receiving the most points, and as you progress through the game, you'll continue to receive points. Oddly enough, these points are almost completely irrelevant as you near the final rounds of the championship--you can have a point total that puts you in second place when you complete the last round, but if you don't meet the prerequisite for that final round, the game ends. There's no trophy ceremony to congratulate even the first-place winner--you're taken back to the main menu screen. This can be incredibly annoying because you'll have to go through the entire stretch of 10 or 15 rounds all over again.

Fortunately, whenever you reach a course in the championship mode, it will be made available in the time trial mode, in which you can practice the timing of your turns and get to know the course layout. The time trial mode has its own share of problems because it's set up so that you can't miss even one buoy, which makes it difficult to run through a course at full speed to get your timing corrected. Eventually, it becomes less of a problem as you learn the course, but for beginners, you might as well head straight for the championship or arcade modes.

The freestyle mode is the only option in Wave Rally that doesn't involve buoys or competition against other racers. Instead, it gives you an opportunity to race around a wide-open area and execute various tricks off ramps or large waves. Your tricks are then judged based on a couple of different categories, including technical and artistic merit, composition, succession, and appeal. To perform tricks, you have to execute basic face-button and D-pad combinations. Other than a break from the regular competition in Wave Rally or to set a high score, there isn't much incentive to play through the freestyle mode, and as such, the other modes will probably receive most of your attention.

Regardless of the mode you're playing in, you'll notice that Wave Rally's controls are a little stiff. Making a figure-eight cut in between buoys set a reasonable distance apart from each other is actually difficult to do, as it relies more on precise timing as opposed to the amount of pressure applied to the analog stick. Even making a solid cut around a single buoy can be difficult without pulling back on the analog stick and slowing down--usually, your rider will end up taking a really wide angle coming out of the turn and increase the chance of running into a barrier. It seems like it's easier to make turns in the runabout--the sit-down version of the Jet Ski, which you can select from before starting in any mode--than in the Jet Ski, but it's still more difficult than it probably should be. Of course, in the earlier courses where the buoys are spread farther apart and you're given much more room to navigate, the control problems aren't as significant. But when you reach some of the later courses--like the Japanese Cave--which give very little room, the control problems become quite apparent.

It also becomes apparent early on that the computer rarely, if ever, makes mistakes. Occasionally, you'll see a computer opponent rush up behind you and make contact with your craft, but you'll hardly ever see an opponent collide with a barrier, miss a buoy, or run aground. In addition, if you're in first place, there will always be an opponent a split second behind you, and since there's no turbo feature in the game, you're constantly looking over your shoulder. Undoubtedly, it makes the races more exciting, but it's a little unrealistic and unfair, especially during the later rounds, in which a single mistake can end the game.

Despite all of its problems, when you see Wave Rally in action, it's easy to overlook any problems it has. The waves are done quite well and have a surprising amount of variation in terms of frequency and size--the first wave in the freestyle mode is enormous. Wave Rally's water occasionally looks like liquid metal in some areas, but for the most part, it's a convincing effect that easily rivals Splashdown's water. Some of the alternate course versions, like the night version of the Venice Canals, also look quite spectacular. It's also worth noting that the frame rate remains steady and crisp even in the two-player split-screen mode.

Overall, Wave Rally seems like a missed opportunity. It could have easily been one of those must-buy titles if the development team had taken the time to adjust the controls--to make it seem like you're controlling a Jet Ski or a runabout instead of a battleship. Even some smaller fixes--like splitting up the championship mode into two or three different sections--would have been better than just a single stretch of races. Wave Rally's soundtrack is made up of generic techno-style tunes, so some more effort could have gone into the sound as well. It all adds up to a game that serves as a nice showpiece for the system's abilities but lacks the in-depth mechanics and the solid control of other games currently available. 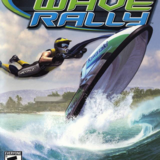 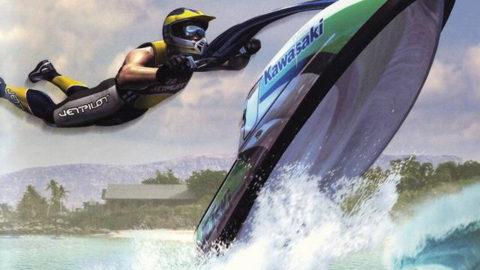