Wattam is an emotive world fueled by pure friendship that is sure to put a smile on your face.

There's a part in Wattam where your friend (an old-fashioned telephone) is crying because the sun took its receiver and is making a long-distance phone call. To solve this cellular problem, you have to gather all of your friends, stack them up, and climb on top of them so you can explain the situation to the sun and ask for the receiver back. Once you get up there, the sun gives it back and apologizes for the misunderstanding. The telephone says that it's okay, and then you carry on with your day.

That might sound like a hallucination, but that's the heart of Wattam. It's a bunch of silly concepts and weird actors being constantly thrown into head-scratching scenarios that you have to solve. In this world, it doesn't really matter that everything is so bizarre. What matters is ensuring all of your friends are happy, and every character would do absolutely anything possible to make their reality a friendship utopia.

Every character in Wattam is a vibrant random object that changes shapes, forms, and sizes the more you progress and interact with the world and its environment. The game starts with one character, but you meet plenty of new pals, and later in the game the screen becomes charmingly cluttered, like a kid dumped a bunch of their toys on the floor and didn't clean it up. Among the characters are trees that can gobble up others and turn them into a fruitified version of themselves, a toilet named Linda that can turn characters into poop, and a nose named Ronald that can sniff up characters that are buried underground. The characters always seem to be having fun, embracing the change and sometimes adopting new personas and using catchphrases to parody genres like action movies and whodunits. They treat each other like old friends and run around and play with each other even when you're not controlling them. Watching them all interact and utilize their powers together adds a sense of life to this zany world--it may be weird, but they have their own fascinating ecosystem going on.

The main character is a green cube with a bowler hat named The Mayor. At the start of the game, The Mayor finds out about "Kaboom," the hidden power of its hat which launches everyone in the nearby radius into the sky in an explosion of laughter (the people love a good Kaboom). With your newfound ability and the strange charisma of a cube, it's your job to explore the world, learn its history, and keep everyone happy. Most of the time you're acting as a mediator, walking up to whoever is crying at the given moment, asking them a genuine "What's wrong?" and then solving their problems via a mini-game. It's tough work at times due to some pushback from awkward controls and sudden frame rate drops, but it never gets frustrating. You just look down and realize you're playing as a cool little apple who loves to dance and you finish the mission. It's also satisfyingly worth it at the end of each puzzle when you see your motley crew of inanimate objects cheering you on and having a blast together in this world you helped soothe.

You can play as anything on the screen, and when you swap into a character, it changes the main instrument in the song that's playing in the background. Each character has their own designated sounds: If you switch to a plant bud you'll hear the theme with a xylophone, for example, and if you switch to a poop you'll hear fart noises. Each quirky object has a clear and thoughtful theme tune, and the soundtrack as a whole always has you grooving. Sometimes I'd take a break from the main story to swap to a character and just listen to how the songs sounded from their perspective. There's a jazz song on the soundtrack called "A Long Time: The Six Years" that has no business going that hard.

Wattam is a collection of plotlines with objectives that can be completed in a few minutes, so each time you go back to the game it feels like a vastly different experience than what you were doing half an hour previously. One moment you could be running around as a miniature acorn, trying to find a spot to bury yourself, and the next you could be meeting a golden bowling pin that wants you to stack your friends to its exact height. It could so easily have been disorienting to be forced to constantly learn new mechanics and to always be playing the game in new ways every few moments, but Wattam isn't overwhelming. There's a sense of intrigue whenever a new character needs help, because whenever you help one, something in the game changes significantly--someone will gain a new power or maybe a mysterious staircase will emerge for you to investigate.

While it's essentially an anthology of short mini-games, Wattam has an underlying plot that's revealed over the course of a few cutscenes. These stop all the tomfoolery to tell a story of the apocalyptic events that happened right before the start of the game; it's a surprising tonal shift but it still fits very well with Wattam's ethos. Wattam is cool because it isn't just eccentric for eccentricity's sake--it also has a message it wants to share. You meet a few characters that come in the form of scroll, a book, and a futuristic floppy disk that explain that message and why connections and bonds are so important in this world. While they aren't the deepest cutscenes in the world, Wattam's message inside of them is ultimately heartwarming and offers context to things you wouldn't think are connected.

It isn't often that you play something that is so pure and unapologetically itself, but that's Wattam. I don't know if I'll ever play another game that makes me turn all of my friends into fruit so I can progress. It oozes passion, and it has an infectious enthusiasm that's present in each and every aspect of it. Wattam never takes itself too seriously, and that makes it easy to buy into its world and suspend your disbelief. While the gameplay is all over the place, Wattam is held together by themes of friendship and a cohesive soundtrack that actually leave you grinning long after you're done. 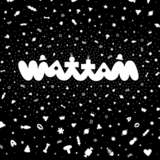 Funké played Wattam for around five hours total, which amounted to completing one full playthrough and doing some of the post-game content.