Much like elevator doors pause before closing, after you hit the button, so, too, does Warpath when you press, say, the bite button.

Whose idea was this game, anyway? As if it weren't enough for the world to endure the lethargic silicon fallacy that was Primal Rage, someone then decided to create a bigger, better dinosaur trap. "We can rebuild it. We can make it stronger. We can make the six-million-dollar dinosaur fighting game!" This must have been the rallying cry at some forsaken boardroom meeting when discussing the fate of Warpath: Jurassic Park.

Developed by Black Ops Entertainment, those crafty code-slingers responsible for Namco's Treasures of the Deep and the recently released Tomorrow Never Dies, Warpath is as straight up a dinosaur-fighting game as there ever has been. While this game no doubt may have looked good on paper (get dinos together, have them slug it out, throw in a few encyclopedic touches, and there you go), it is truly horrible in practice.

While the dinosaurs themselves look really nice, their surroundings (or environments) are warp-tastic adventures in texture-map glitching. Surfaces buckle and distortion abounds as the PlayStation struggles to keep all this geometry under control. The occasional graphic highlight (read: gimmick) will attempt to liven things up in the form of a human running around and waiting to be eaten or small dinosaurs walking between the combatants only to be crushed by unsympathetic dinosaur feet.

Graphical guffaws aside, the fighting "action" is atrocious. If ever there was a game specifically designed for button mashing, then this is it. Sadly, button response time is bad. Much like elevator doors pause before closing, after you hit the button, so, too, does Warpath when you press, say, the bite button. Press the button, wait, and the dinosaur attempts to bite. The game continues like this no matter what you do, and it's not long before this disjointed battle of cause and effect wears out its welcome. Simply put, it's hard to feel any sort of control over your actions in Warpath. There are Tekken-like hold moves with which to either throttle your opponent or cause a vicious impaling move, but once again, your chances of pulling the move off when you want are hit and miss. Executing a combo of any sorts is directly linked to how fast you can whack the buttons, but even the combos gives you mixed results due to the poor collision detection.

Once past the button mashing, the sound effects are insignificant, although Black Ops did a reasonable job trying to simulate "authentic" dinosaur sounds. While the selection of dinosaurs is decent, many are hidden at first, and it's quite possible that even the youngest gamer will tire of the unlocking process rather quickly. Although there is a decent dinosaur fact-file and other should-be-standard "secrets" waiting to be discovered, this is nothing more than a useful tool for a science class. As a game, Warpath: Jurassic Park is well past its due date. Pass with prejudice. 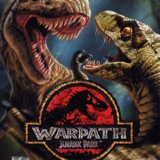