New or younger players should be able to look past the game's limitations and simply accept it as a simple but fun game.

While the real-time strategy genre has seen some stellar hits on the PC, the console market hasn't been nearly as receptive to the genre. Between the games' near-requirement for a mouse and keyboard to play properly and the PC's inherently superior online capabilities, we've yet to see a truly amazing RTS game on the PlayStation or the N64. You normally wouldn't expect to see a real-time strategy game appear on the Game Boy, but that's just what Nintendo has released. While Warlocked obviously borrows more than a little from the Warcraft series, it manages to overcome the limitations of the Game Boy and provide a pretty good game.

The story is simple, and the units are basic. There's a war going on - humans vs. beasts. You can play as either faction, which gives you two different storylines, but the units and methods are largely the same. Examples of these units include peasants, which can build structures, mine gold, or cut down trees; knights (or goblins, if you go beast), which have sword attacks; and archers. The structures include a barracks for training soldiers, as well as farms and guard towers. But the rarest and most interesting units - the wizards - give the game a unique edge and lend a Pokémon-style collecting element to the proceedings. As you play through the game, you'll simply find wizards. If you lead them back to your camp and your wizard temple, they become part of your army. You can call out wizards whenever you need them. Each wizard casts a different spell. Some can halt enemies dead in their tracks, while others can turn one of your units into a crow, which lets you fly above your enemy's camp and spy on his progress. The single-player campaigns are interesting, but the game shines with a link cable. You can each build up and save different armies and then throw them into combat against each other, as well as trade wizards back and forth.

While it's mostly forgivable, considering the platform, the game is not without its limitations. It's difficult to select and deselect units, and you're limited to selecting only a handful of units at once. Also, the game is without any sort of real upgrade or technology tree - sticking you with only a few units and structures. Also, you can't queue units, so if you want a large army of knights, you have to sit at your barracks and continually click on them to build knights one at a time. The pathing AI leaves a lot to be desired, occasionally commanding one of your units to take the long way around an obstacle if it's blocked by the rest of your units. Once you're finished acclimating yourself to the game's control scheme, the reality of the game's simplistic nature begins to set in, and fans of more complex real-time strategy games will quickly tire of the "build units and break stuff" monotony.

Graphically, the game is bright and colorful, making good use of the GBC's high-color mode for victory stills and storyline progression. The units are easily identifiable, and the onscreen action rarely becomes confusing. The soundtrack isn't terrible, though the tracks become repetitive after a few hours and often drown out the unit speech.

Two types of people will play Warlocked, and those two types will have two distinctly different reactions. Seasoned RTS vets will find the game cute, yet too simple and too much like Warcraft to be entertaining for very long. New or younger players should be able to look past the game's limitations and simply accept it as a simple but fun game, with multiplayer and the wizards giving the game some variation. 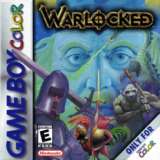