This GameCube update is largely the same as last year's Game Boy Advance game, right down to the GBA-quality graphics used in the minigames themselves.

When it was released on the Game Boy Advance a little less than a year ago, WarioWare Inc.: Mega MicroGame$ was an insane, though totally compelling, breath of fresh air. More than 200 little minigames were packed onto that cartridge, and the game served them up hot and fast, making for one of the most manic games ever made. But the game also had a lot of soul to it. The quick cutscenes between sections weren't long-winded, but they added a sense of continuity to the proceedings. Now the concept graduates to the GameCube in WarioWare Inc.: Mega Party Game$. This GameCube update is largely the same thing, right down to the GBA-quality graphics used in the minigames themselves. It also has a new multiplayer focus, which wraps a bunch of mostly unnecessary shells around what made the first game so amazing.

More than 200 different games are packed into WarioWare. The games are even more simplified than any minigame you've seen in other "party" games, and they revolve around one specific action per game. So in one game you'll be using a Wario-like bug to push a golf ball into a hole. In another, you'll quickly take on the role of Samus Aran and fire missiles at Mother Brain. One has you timing a button press to ensure that a set of roving fingers find their way into nostrils. Each game, at its default speed, lasts for around five seconds. But the default speed doesn't last long.

A big part of what makes WarioWare so insane is the way the game constantly speeds up. When things are slow, it's already a challenge to wait for a game to appear, identify what, exactly, you need to do, and then execute before time expires. But as you get better and better, the game runs faster and faster. Before long, you'll be running through games at ludicrous speeds, which forces you to practically enter a Zen-like trance to maintain focus. The game feels like a runaway train, and it's up to you to hold on for as long as you can until the wheels fall off.

That single-player mode of play is still found in the GameCube version of WarioWare, though some of the charm is missing, as the games are only presented in an elevator-styled setting. Gone are the taxicab, the monkey throwing bananas at cop cars, and the dojo-themed presentations that added so much to the GBA version. Additionally, all of the minigames are unlocked right from the start. On the GBA, you had to see a game during regular play before you could go practice it separately. But all told, the single-player portion of the game is a pretty small part of the overall package.

It's called Mega Party Game$ for a reason. Where the GBA game was a solo affair, the GameCube version has been designed to leverage those existing minigames in a multiplayer environment. So the game has a handful of different multiplayer shells to surround the minigames. One is a simple survival match, where players simply take turns playing minigames. You fall out of the running when you fail three times, and the winner is the last player left. They get even crazier from there. Ever wanted to play the popular board game Othello on your GameCube? Now you can, but you'll have to play a specific number of minigames successfully in order to claim a space. One game puts one player in charge of playing minigames while other players try to foul that player up by blocking portions of the screen. Another is the opposite, where the players who aren't playing the minigames control spotlights and must shed some light on the action so the minigame player can see what he or she is doing.

While there's certainly fun to be had in the multiplayer modes of WarioWare, they all seem pretty forced. In particular, Othello with minigames is a bit of a stretch. All in all, the minigames are the real star of the show, and they're great enough to stand on their own without needing some sort of external shell or other impetus to play them.

Graphically, WarioWare for the GameCube looks like the Game Boy Advance version of the game on a Game Boy Player. The same graphics are used with the same slightly blurry fidelity you may be familiar with from the Game Boy Player. Yes, there's definitely a charm to those graphics, but taken in the context of a game that already appeared on a handheld last year, the look of WarioWare on the GameCube feels like some sort of cruel joke. Making the contrast even starker are the non-game graphics. Everything from the elevator that separates minigames to the screens in all the multiplayer games is razor sharp, extremely colorful, and really quite charming. Then the minigame opens up, and you're looking at a blurry GBA game. The constant back and forth between the two makes the GBA-quality graphics look worse than they really are. It would have been pretty sweet to see the games themselves spruced up in a similar fashion.

The sound in the game also comes from the Game Boy Advance version of WarioWare, but some of the music has been cleaned up a bit. The game's music and sound effects speed up alongside the action and really do a fine job of adding to the manic, pressure-filled feel of the minigames.

The manual for WarioWare Inc.: Mega Party Game$ is written as if it were Wario's diary. The first blurb ends with, "I'm feeling generous, so I'll even let you keep peeking at my supersecret journal to get the inside scoop on my latest scam...I mean, game!" After playing the GameCube version of WarioWare at length, "scam" actually seems like a fair description, though a harsh one. It may be retailing for only $30--the same price as the GBA game--but if you've already played the GBA version, there's little more for you to see here. And if you haven't played the GBA version, you're better off getting that one instead, as it achieves a certain level of purity that the GameCube version lacks. Finally, if you're a fan of multiplayer party games, you'd probably be better served by any of the recent Mario Party games. 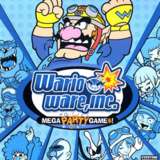 This GameCube update is largely the same as last year's Game Boy Advance game, right down to the GBA-quality graphics used in the minigames themselves.