The game certainly contains a lot of the same Wario charm that makes his GBA appearances so memorable, but the final product is too short and simplistic to hold your attention for more than a day.

Who, exactly, is Wario? Nintendo's antihero has always been portrayed as an evil version of Mario, but the two actually rarely have appeared to be at odds with each another. Over the years, Wario has been drifting off on his own, and his character has become less of an evil nemesis for Mario and more of a wacky, fanatical, and greedy treasure hunter. Wario World is Wario's first adventure onto the GameCube. The game certainly contains a lot of the same Wario charm that makes his GBA appearances so memorable, but the final product is too short and simplistic to hold your attention for more than a day.

You won't find a lot of story sequences driving Wario's adventure. The game gives you a brief text explanation at the outset, claiming that Wario stole an evil black jewel that transformed his treasure horde into monsters. You, as Wario, have to get that treasure back by beating up on all sorts of monsters. When one level is completed, the next one opens up and play continues, without the aid of any sort of additional narrative.

Wario World is a platform game, but it doesn't share a lot of common traits with the standard 3D platformers, like Ratchet & Clank or Super Mario Sunshine. The camera in Wario World is locked into one perspective, and the action is seen from this angle throughout. The world is stocked with plenty of enemies, and Wario's main form of attack is using his fists to punch out the lights of anything that gets in his way. Most enemies fall with one hit, but others are merely stunned. Stunned enemies can be picked up and thrown or swung around and around to bop other nearby foes, or you can execute devastating spinning pile drivers on them, which has the added bonus of knocking out any other bad guys in the direct vicinity. Wario also has his standard shoulder charge.

The primary goal in each level is to collect a specific number of jewels. Once you've collected enough--the first level only requires three, but eventually you'll be tracking down five and six--you can open the path to that level's boss. These jewels are the rewards for solving puzzles in each level. The game's puzzle sections are hidden behind glowing trapdoors that pepper each stage's landscape. The puzzles are of the basic platform-jumping variety and actually have a bit in common with Super Mario Sunshine's sections that removed Mario's water pack and asked you to hop across a collection of blocks. None of the puzzles are very hard, and there's no consequence for failure, as falling off the edge simply places you back at the beginning of the puzzle.

There aren't many levels in Wario. The game is broken up into four worlds. Each world has two stages, each ending in a boss fight. Once you've cleared those two stages, a third boss fight opens up. Beating this boss opens up the next world. The game's levels are usually pretty large, and each offers two extra objectives, asking you to find eight pieces of hidden treasure and collect eight pieces of a gold Wario statue. Collecting the treasure unlocks downloadable demo versions of games from Wario's recent GBA release, WarioWare Inc.: Mega MicroGame$. Completing the statue increases your maximum health.

But increasing your heart count is never really an issue in Wario World, because the game is incredibly easy. Even with the game's levels being larger than average, the game still only has eight of them, and there really isn't much to do. The boss fights are all unique and cool, but they're also really easy. On top of all this, the game lets you continue where you left off--even if that means starting back up in the middle of a boss fight--for a relatively small number of coins. The game continually tosses coins at you, so provided you aren't going out of your way to run out of health, continuing shouldn't become an issue.

Wario World has some graphical charm. While the enemies don't change much in attack type from level to level, they do at least look different to better fit the stage's motif. The stages are pretty colorful, and generally speaking, everything looks good. The texture work can get a little spotty at times, and the fact that the enemies near the end of the game are using the same basic animation as the ones you fight at the start gets a little tiresome. The game's boss stages provide a much-needed break from the monotonous look of the rest of the game, and some of these fights look really nice.

The game's sound is roughly what you'd expect. Wario has always been a really talkative character, and he's always running off at the mouth. Most of his speech is limited to the typical yelps and shouts associated with platform-style physical exertion, and it can get a little grating over time, especially in spots that require a lot of jumping. The game's music serves the stage design, meaning that the level designed with a circus motif has circus-style music playing under it.

There are some pretty cool things going on in Wario World--let's face it, any game with a spinning pile driver already has at least one strong point in its favor--but the game's mechanics are shallow, there aren't enough levels, and the game is easy enough to complete in an afternoon. There are some things to like here, but nothing that can't be experienced to the fullest by merely renting the game.

View Comments (0)
Back To Top
6.4
Fair
About GameSpot Reviews 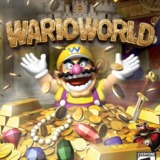 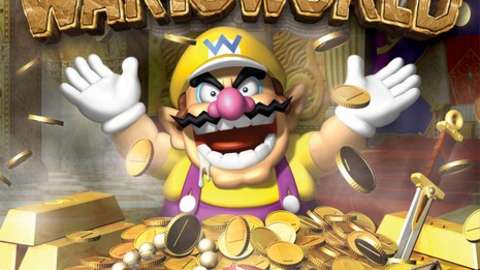 The game certainly contains a lot of the same Wario charm that makes his GBA appearances so memorable, but the final product is too short and simplistic to hold your attention for more than a day.