Wario Land II DX is one of the best 2D platformers to come out of Nintendo in years.

Mario's evil nemesis may not be the most popular video game character in the world, but he sure is one of the wealthiest. Wario's ill-gotten gains grew so large he needed a specially built castle to hold it all. Everything was going smoothly until the even nastier Captain Syrup and her Black Sugar Gang sneaked inside last night and took every single piece of treasure that could be found. Not only that, but the gang left the tap on, and now all Wario's castle is soaking wet. This is how Wario Land II starts.

The object of Wario Land II is to come in and help Wario recover his stolen loot. After clearing the castle of all the water, his search will take you through the wilderness, a giant boat, and through the wrong side of town before venturing into Captain Syrup's domain. Each platform-filled level is fraught with danger. But, there's the twist - it's impossible for Wario to be hurt, meaning that even video game novices have a chance to complete the game. Just because you're immortal doesn't mean Wario Land II is easy, however - every time you get hit, you lose valuable coins, and some enemies have the power to flatten you or even turn you into a zombie.

The fact that it's impossible to die may make you think that Wario Land II will get boring after you inevitably finish it, but thankfully that's not the case. Each level is full of hidden areas, switches, seemingly inaccessible doorways, and bonus games. After defeating Captain Syrup and her henchmen for the first time, you're shown that you've only played through half of the levels available, and you must find hidden map pieces and every one of Wario's treasures to get to the game's true ending. Even once that's done, a new challenge awaits....

Back when this game was released last year as a monochrome game, Wario Land II still managed to turn heads. Now that the entire game has been colored, it looks even better than the best NES platformers of the day. Wario himself is huge, bold, and humorously animated, and the levels are packed full of detail. The cute creatures you encounter are likewise polished, but beware - just because they look good doesn't mean they're on your side.

Backward compatibility ensures that the game will play on any Game Boy model, but while the gameplay is exactly the same in monochrome, Super Game Boy (which looks quite nice, actually), or Game Boy Color modes, you can't start a game in one mode and continue play on another. It's a small point, but annoying for people who like loaning games to their friends.

Value for money? Certainly. This game is a great way to show off the Game Boy Color's abilities? Definitely. Is it the best 2D platformer to come out of Nintendo in years? Far and away, yes. Get this game. 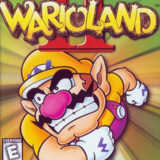