As far as platformers go, Wario Land 3 is a game that fires on all cylinders.

What a difference two years make. Wario Land 2 was a high-quality platformer, but it didn't fully express the quirkiness or fun factor that Nintendo refined over the years with its Mario series. The concept of an invincible character, along with a somewhat short quest served to deliver a game steeped in gameplay but lacking longevity. Now, Nintendo is back with its third title in the series, Wario Land 3, aiming to remedy prior complaints while taking run-and-jump gameplay to new heights of enjoyment.

Right from the initial anime-style intro, you can tell Wario Land 3 is going to be a unique experience. Cartoon-quality animation leaps from the screen as Wario finds himself sucked into a dream world contained within a music box. His future is uncertain, until a hidden figure offers an escape. If Wario collects the five music boxes that will free this ghostly power from its prison, the hidden figure will return Wario to his physical self. Sure, Wario realizes that the old guy has his own agenda, but what does he care? Wario is greedy, happy-go-lucky, and quite fond of his freedom.

Upon exiting the master's cave, Wario finds himself at the first of the game's 20 initial levels. Throughout each rests four treasure boxes, each of which can either unlock a later level, transform prior levels, yield a sacred object, or reward Wario with a power-up. Making things interesting, some chests require power-ups from later levels to reach, while others remain inaccessible until an environmental disaster transforms the terrain. Because of this nonlinear quest, Wario is constantly traversing back and forth through the game's four main areas, with each level constantly offering something new to discover.

Many factors serve to make the Wario 3 experience enjoyable. First, since it's a dream world, Wario can't be killed. His invincibility exists as both a hindrance and a tool for guiding him through levels. Contact with enemies results in a variety of status changes, such as setting Wario ablaze, causing him to float, or just bouncing him toward a waiting goal. These status changes, along with the game's ten various power-ups, are what give you a near-limitless selection of abilities. Since Wario can't die, the difficulty level is tempered by puzzles, lots of mind-numbing, near hair-pulling puzzles. Thankfully though, crashing into enemies no longer causes Wario to lose the coins he's collected within a level, removing one of the more aggravating elements of the prior Wario title. Using these coins, Wario can access a Mario Golf-inspired minigame, which yields even greater access to levels and the secrets they hold. One would think that the constant traveling back and forth would bring about monotony, but the constant reward of finding new secrets and power-ups, coupled with a number of hilarious boss characters, makes it all worthwhile.

While a standard-sized review is barely enough to do a description of Wario 3's gameplay justice, it's even more difficult to describe the game's visuals. Imagine the level of animation that Nintendo delivered with Bionic Commando, then double it. Now, add in a few more colors, amusingly detailed characters, and vibrant backgrounds, and you might scratch the surface of how great this game looks. Cutscenes leap from the screen with hundreds of vibrant colors, in-game graphics are cartoonlike in both appearance and quality, and little niceties such as flowing water and glittering ice only help to further bring across the game's beauty. When it comes to looks, Wario 3 is the first game to deliver SNES quality visuals within the confines of a Game Boy Color game.

Further keeping with the game's overall quality, Nintendo has managed to execute a near-flawless auditory experience. Sound effects are crisp and clean, offering constant amusement while never sounding tinny. Background music is both catchy and nonrepetitive, delivering tunes that will remain etched in your minds for years to come. Though some could say the game's sound quality isn't quite up to par with Bionic Commando or Zelda DX, it's a pretty difficult comparison to make. It's like comparing a fully topped pizza with one with extra cheese. Both are great, and for some people, one's a tad better. However, some people prefer their pizza with less cheese, and as such, many will find Wario 3's sound quality equal to, if not superior to, that of Nintendo's prior efforts.

As far as platformers go, Wario Land 3 is a game that fires on all cylinders. Massive replay value rounds out perfect gameplay, a battery save keeps your progress, and a plethora of cutscenes further serves to delight one's senses past the point of pleasure. Additionally, a variety of plot twists and gotchas helps to make the story one of the more engrossing in recent memory, with an end boss that simply has to be seen to be believed. In many ways, it's as if Nintendo set out to make Wario 3 into a 2D RPG. Whatever the intent, Wario 3 raises the bar that all other platformer titles must meet in terms of fun, eye-candy, and replay value. 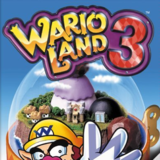