Interface issues and the limitations of the PSP take a toll on the otherwise impressive Warhammer 40,000: Squad Command.

Certain types of games just don't easily mesh with handheld systems. A good case in point is the turn-based tactical simulation, which is awfully tricky to pull off successfully without a mouse on which to fall back. Warhammer 40,000: Squad Command could have been a contender if it had only come out on a platform better able to host this style of game. Control limitations of the Sony PSP and some design miscues make this a near miss most appreciated by Warhammer fans too hot for the license to notice any of the game's problems.

Still, you can't say that RedLynx hasn't done a great job with some of the basics. The developer has put together a very good, albeit very basic, tactical engine that should be a snap to learn for anyone who has every played a turn-based squad shooter before. All movement and combat is based on a traditional turn-based battle system where every unit is granted a set number of action points with which to move and shoot during each turn. An us-against-them storyline pitting the Imperium against the forces of Chaos runs through the 15-mission solo campaign and further sets a no-nonsense tone. Plot isn't much developed here (although the cutscenes feature gorgeous action-movie bombast and the battle sequences come complete with accurate takes on those distinctive Warhammer miniatures), although you don't have to have any experience with the tabletop game to deal with the mostly straightforward objectives. Most of the time you're just clearing out Chaos bases and trying to kill every enemy soldier on the map for the glory of the emperor. However, you occasionally have to deal with complications, such as laser turrets and tanks.

This sounds like an awfully bland formula and, well, it is, but great level design makes every assignment feel like a fresh challenge. Solid enemy troop placement along with loads of options for cover in buildings, walls, wreckage, and other landscape features makes combat interesting all of the way through the game. Almost everything in the game can be destroyed too, leaving you an incredible amount of freedom when devising battle strategies. You can hammer away at foes head-on and blast through fortifications with the aid of such heavy weapons as laserguns or rocket launchers. You can flank bad guys and clip them from long distance with sniper rifles. Or you can mix up different approaches to attract the attention of adversaries on one front, then sneak space marines behind enemy lines and let them go to town with their chainswords.

Yet no matter how you choose to take on the Chaos legions, you need to be cautious about how you spend action points. Enemy artificial intelligence isn't spectacular at putting together offensive battle plans, but it certainly reacts smartly enough to your moves. Chaos foes duck in and out of cover pretty astutely and are quick to carve up any troops that you leave in the open at the end of a turn. A lot of tough decisions need to be made in every mission regarding when to go for it and try to take out an enemy or when to play it safe and hunker down behind cover until the next turn. Of course, the old duck-and-cover maneuver sometimes isn't the safest move. You've got to watch what you're sheltering behind because an enemy with a rocket launcher or a plasma gun might just be able to blast right through your protection and turn you into a fine red mist. Missions can be incredibly tense because level layout and the destructible terrain make enemy actions anything but predictable.

Multiplayer is another plus. The single-player campaign is a bit abbreviated, clocking in at eight or nine hours depending on your skills as a general. However, full support for ad hoc and infrastructure modes of play let you take the battle to other human players both online and off. Unfortunately, there aren't that many Warhammer fanatics playing the game online, which makes arranging a match randomly a touch difficult. It also feels a bit stripped-down with just a trio of level styles (ice, desert, industrial) and sizes (small, medium, large). Faction choices are also limited to run-of-the-mill Imperium and Chaos goons, such as the Ultramarines and the Word Bearers. At least matches play out lag-free.

It's just a shame that the mechanics are so limited. Although Warhammer 40,000: Squad Command has a lot going for it when it comes to straight-up tactical gameplay, the interface just isn't quite up to snuff. One big issue is the camera, which is locked in a tight isometric point of view that can only be slightly swiveled with the analog stick. It's virtually useless during battles because you can't move it far enough to get a good look at your surroundings. Even worse, the default camera angles frequently make it impossible to tell if you've cleared an object and can shoot past it or if you're still behind just enough cover that your shot will be impeded. Many times there is no way to determine how a shot will turn out unless you simply give it a try and squeeze off a round, which of course is a big waste of action points in a game where you need to hoard them like gold. This problem can also result in friendly fire incidents where you take out a buddy even though it looks like you've got a clear line past him to a Chaos enemy. Only the overhead map provides you with a proper look at the battlefield. While it does a great job of displaying a tactical view of what's going on, the top-down perspective can't compensate for being able to readily eye up enemies directly and determine good firing positions.

Controlling your troops can be almost as clunky. Just about everything is handled with the four-way directional buttons, so moving and firing on targets is awkward. You get used to it eventually, but it never seems entirely fluid, and you can't help wonder why RedLynx didn't swap the controls. It would certainly be a lot easier to use the analog pad for cursor movement and the directional buttons to move the camera. Regardless, either control method would merely be adequate for a game like this, which is in desperate need of a mouse or even a full-sized D pad on a console gamepad. At least you can easily swap between squad members with the shoulder buttons and soldier movement paths are clearly laid out onscreen with icons. These icons show you exactly where you're going and provide you with a dead-on account of the number of action points needed to get there.

A little more fine-tuning and Warhammer 40,000: Squad Command might have been a winner. However, with all of the interface and control issues, the game is merely passable to OK, depending on your love of space marines. 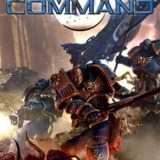