Warhammer 40,000: Space Marine is on the shallow side, but it still serves up plenty of "waaagh!"

If you're a Warhammer 40K fan, you've dreamed of taking up a chainsword and carving Orks into bloody chunks of flesh and bone. Warhammer 40,000: Space Marine plants you in the heavy boots of an Ultramarine and lets you do just that. The viscera fly in this third-person shooter/melee hybrid. They stain the ground and splash against your screen, yet the brainless hordes continue their assault, crying out their familiar "waaagh!" before presenting themselves for slaughter. Space Marine is simple fun, and a treat for fans of the franchise--and for anyone who delights in the ceaseless bloodletting of bad guys. It is, in fact, a little too simple. As entertaining as it is, the game lacks the variety, the memorable moments, and the sense of scale of the finest shooters. After you annihilate yet another great mess of greenskins, the question arises: Is this all there is to it? With some exceptions, yes, that's all there is to it, and it's hard not to wonder what might have, should have been. But the action is so satisfying, and the atmosphere so grim, that you'll want to see the adventure through.

What Space Marine does best is capture the spirit of its universe. The Ultramarines' weathered armor is so heavy and hardy, they don't so much wear it as it wears them. As you push through battle-worn trenches, the Orks' makeshift machinery erupts from the ground, shaking the earth. Roaring greenskins in rocket packs rush past, providing a touch of comedy amid all the carnage. And such carnage it is. Enemies erupt in soggy displays of goo, yet the waves continue, your foes' bloodthirst overcoming their sense of self-preservation. When you carve your chainsword through these forces, the buzz is so authentic that you can almost feel the green flesh being torn away from your foes' skeletons. The visuals and sound both work hard to promote this brutal atmosphere.

The story, on the other hand, is as dry as the battlefields are sodden. (To wit, the opening cutscene begins with a sequence featuring the ever-exciting storytelling device called "words displayed on a monitor.") As Captain Titus, your role is to mow down Orks and, later on, the forces of Chaos. You and your comrades speak in lofty, stentorian tones and act as mere pawns of the plot. The main players are voiced well but are as forgettable as can be, everyone filling their assigned roles but rarely giving you a reason to care about their destinies. The story is too simple for the plot "twists" to feel anything other than inevitable, and while the cliff-hanger ending sets up a sequel, you probably won't feel all that curious about what might happen next.

Not that the promise of more Space Marine is a bad thing. The action is a fun mix of third-person shooting and melee. The sense of weight to the movement, the camera perspective, and the weapon selection interface might at first bring to mind Gears of War, but the similarities are superficial. You might be clad in weighty armor, but you aren't burdened by it. Aiming is swift and smooth, allowing you to gun down dozens of targets without breaking a sweat. When the crowd gets too close, you can swing your chainsword (or axe, or hammer) about with ease, the Orks spraying so much gore it's a wonder there aren't puddles of it to wade through. And unlike in Gears and its ilk, there is no cover system. Space Marine wants you to keep busy, not remove yourself from the action. The health regeneration system also complements the "kill, don't hide" mentality: to restore health, you perform a grotesque finishing kill. This doesn't mean that each enemy is a quick pick-me-up waiting to be harvested, mind you. You are vulnerable during these lengthy moves, so you must be careful not to leave yourself open to gunners or other attackers. Succumbing to death while executing a long fatality can be irksome, but a little tactical thinking should keep that from being a frequent occurrence. In any case, while the final acts have their challenging moments, Space Marine is not particularly hard, so frustration is uncommon.

And so you put an end to the masses of meanies threatening the Forge World you protect. And it's fun, due in large part to your arsenal. You always have your bolt pistol (or its plasma equivalent) and its unlimited ammo when necessary, but it's better to take aim with the bolter, an assault rifle with a good kick to it. It's effective at surprisingly long range, and strong sound effects and a good sense of impact make it fun to use. (You can see the blood spewing from enemies hundreds of feet away.) The scoped stalker bolter is a nice toy, too, best used to take out distant gunners before wading into a sea of daemons with a death wish. The melee action has bite to it as well, though Space Marine is more shooter than hack-and-slash. When you get to the hacking and slashing, you mostly just pound on buttons and perform the occasional brutal execution. Fury mode--in which you become a temporary tornado of carnage--breaks up the repetition with some snazzy slow-motion visuals and extra helpings of Ork intestines.

Space Marine eventually falls into a predictable rhythm: you plow through the multitudes that infest the game's endless corridors, occasionally pausing to hear a bit of plot exposition and ride some elevators. And then it all happens again. Some of these corridors are actual facility hallways; others are the kinds game developers create out of debris that just so happened to have fallen in such a linear way. It's a familiar trick to be sure, but it stands out here because there aren't many attempts to make these passages feel like anything more than passages. In fact, this is one of several ways in which Warhammer 40K: Space Marine relies on the tried-and-true elements of shooter design, but fails to inject them with an amount of creativity that matches the amount of bloodshed. The legions of Chaos arrive in time, but not before hours of greenskin butchery in which one sequence feels much like the last sequence. And even when Chaos Marines and daemons replace or join the Orks, you needn't do a whole lot that is different from before. There's too little to break up the pace. The boss fights are few, and the only one that veers from the "shoot it until it dies" mold--the final encounter--is an easy quick-time event, not the breathless battle this ferocious universe screams for.

That doesn't mean there isn't an occasional change of pace, and though they are welcome, you wish there were more such detours. At a few different points, you're gifted with a jump pack. With this equipment strapped to your back, the joy of flight enhances the standard combat, allowing you to slam into the ground and destroy your foes, or at least cause them to stumble. The open environments and freedom of movement make the jump pack sequences a hoot, but it's such a pity that the pack isn't standard equipment. These moments are over before you know it, and you're back to the usual gunning and slashing after the game offers its excuse for ripping the jump pack away from you. (There's no room to fly in this cave! You ran out of fuel!) A short excursion upon a gargantuan war machine has you fending off some airborne sentries, which is fun. But like the rest of the game, Space Marine never takes the next step to go from standard to spectacular: no thrilling battle aboard this massive entity as it trudges toward its destination, or no chance to fight alongside it, for example.

Online multiplayer at least helps mix things up, and like the single-player campaign, it captures the tone of the universe but never goes the extra mile. There are two modes: Annihilation (team deathmatch) and Seize Ground (capture and hold). The modes (and maps) are few, but Space Marine's shooting mechanics and explosive weapons make for an amusing online distraction. Before you begin, you choose a loadout, and as you gain multiplayer levels (which happens at a good clip), you earn more loadout slots, as well as the ability to customize your loadouts with more weapons and equipment. One such bit of equipment is the jump pack that graces the campaign, which makes it fun to zoom into a combat hotspot, down a few foes, and then soar back into the air, possibly doing some additional damage to the remaining combatants with your thrusters. If you prefer to sacrifice maneuverability for firepower, you can take the heavy bolter along, and even brace yourself in place for greater accuracy.

The large maps feature plenty of architectural elements to break up your line of sight, giving both close-range and long-range specialists a chance to make a difference. And like in many modern shooters, you earn perks that improve your firepower, armor regeneration, and so on. But even if you're a low-level flunky, you still get the chance to stand up to the big boys: you can adopt the loadout of your killer before respawning, which is a great touch that keeps the early hours from being overly frustrating. The paint-by-numbers modes aren't inspiring, but at least what's here is solid, if not particularly top-notch.

Speaking of painting, you also get to customize your online avatar with various patterns, emblems, and colors. The ability to unlock more assets might be the strongest reason to stick with Space Marine's online play--certainly if you're a seasoned Warhammer 40K fan who has lost countless hours to painting miniatures. In fact, it's the "Warhammer" part that Space Marine does best. You get to don the famous armor and fend off the forces of Chaos, bolter and chainsaw in hand, on battlefields where rusted structures puncture the clouded orange sky. If only the game had done more than send endless waves of Orks and daemons toward the dangerous end of your meltagun. Warhammer 40,000: Space Marine is a good start, as mindless as it is. Let's hope that the intimated follow-up takes the Ork extermination to the next level. 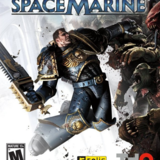 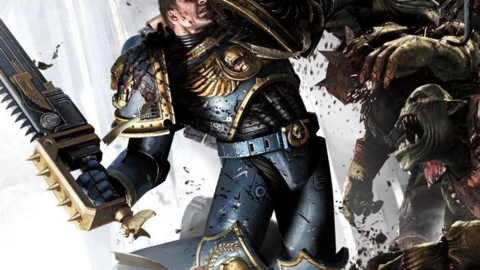 In Warhammer 40,000: Space Marine, you play as Captain Titus of the Ultramarines, who is humanity's last hope for survival in a war-ridden future.