All’s Fair in Love and Warhammer

Dawn of War III is a game at odds with itself. Matches start with a lot of momentum and expand quickly before settling into a soft balance for long stretches. Careful control of elite warriors on the front line is essential, but so is constantly nurturing your base and marshalling upgrades for your armies. Despite that, Dawn of War III holds its own, offering delicious tooth-and-nail fights that will push both your technical skill and strategic aptitude to their limit.

Continuing the story of Gabriel Angelos, head of the storied bunch of Space Marines known as the Blood Ravens, Dawn of War III centers on the search for an artifact from the Eldar blood god Khaine. However, the campaign shifts between each of the game's three major factions--the Space Marines, the Eldar, and the Orks--to show each of their perspectives and explain why a magical MacGuffin is worth interplanetary war.

If you got through that paragraph fine and you know your tyranids from your chaos demons, you're good to go. Otherwise, like most games under the Warhammer umbrella, this isn't friendly to newcomers--and it matters this time around. Everything from tactical options to unit management leans at least partially on knowledge of the Warhammer universe. The tutorial will do a solid job of giving you the tools needed to get going, but background knowledge is all but essential.

Beyond a healthy addition to the already massive Warhammer canon, the campaign doesn't offer much. You have a straight push through 17 missions, and each of them serves as a really drawn-out tutorial, offering contrived scenarios for you to test out different strategies before playing against others online. That's fine on its own, but without interesting twists on the fundamentals of play, you're better off starting with multiplayer. There's only one mode, but it's packed with ideas.

Skirmishes can have between two and six human (or AI) players split into two teams. Each is charged with defending a power core. Both sides start with an array of basic defenses, including a pair of powerful automated turrets, to deter early intruders. From there, you'll plan out your base and capture strategic points around the map to pull in resources and keep tabs on the enemy.

That, in itself, could form the backbone of a game, but Dawn of War III also has an array of powerful hero units. Each is a pillar of the Warhammer story and comes with weapons and powers befitting their esteem. You'll be able to summon your first after the first few minutes of a match, after which they can press fronts, boost morale, or harass your foes. While most of these units can turn the tide on their own, they're akin to a queen in chess, in that if you do manage to lose one, it can be devastating.

That's fine on its own, but what it means, practically speaking, is that just as your base-building gets more complex and requires more care and attention, you're also tasked with tactically managing your Elite units. That makes for one steep learning curve, but for those that manage it, there's a lot of added depth.

Bases in Dawn of War aren't just where your core units get churned out. They're a vital part of resupplying and supporting your forward troops. Elites, tough as they are, also don't typically heal on their own, and marching your shiny Morkanaut all the way to the foe's headquarters--only to have to march home and then back just to freshen up--isn't wise. That creates an unusual attentiveness to the front lines that lends itself to white-knuckle play.

Awkward as it can be, there's magic to be found here. Pressing with the gargantuan Wraithknight Taldeer as a distraction right as you capture a resource node is exhilarating, and it’s made that much better when you can connect the Webway and warp in reinforcements from across the map.

These gains are always tenuous, though. Dawn of War strictly limits army sizes, and resource gathering slows exponentially the more troops you have. This means that even if you knock an opponent down, they'll build up resources quickly and come back swinging in short order. That magnifies the importance of the psychological play. Running with the previous example, while you'd have a strong forward position, that also stretches supply lines and leaves you open to a swift, brutal counterattack.

These quick reversals are brilliant and make for intense, memorable matches. While humans are more fun to spar with, the included AI isn't a slouch either. Computer players will try their own tricks, often hinting at larger armies than they have for intimidation, or launching sneak attacks to your core base.

Each of the three main factions also complement each other well in the classic rock-paper-scissors fashion. Space Marines are slow to build up momentum, but once they've hit the field, they're a force. Eldar are mobile and suited for hit-and-run attacks, and the Orks...well, they're weird. They’re exceptionally strong, but only when they declare a "WAAAAAAAGH!!!"--which, while terrifying, notifies everyone on the field, letting others adjust defenses accordingly.

Between matches, you can tune your army a bit, changing out different elite units as a kind of loadout. Plus, in a nod to Warhammer’s tabletop inspirations, you can customize the paint and color scheme for every unit in the game. Given the role of army customization in Warhammer proper, it's a shame you can't also swap out weapons and gear for your basic units and vehicles, for example. They're nice additions that mix things up a bit, but they're also a bit shallow.

A few other problems lurk here and there, particularly in the user interface. On multiple occasions, Elite units won’t deselect when clicking around the map. At times, dragging boxes around troops won’t highlight them at all. While small problems on the whole, they did cause their share of raised voices.

Dawn of War III doesn't quite keep up with its predecessors' pedigree of high production values. The game certainly sounds amazing, with crisp sound effects and an excellent soundtrack, but the same can't always be said of the visuals. Battles often look great zoomed out, but pulling in shows plenty of blemishes. The camera also doesn't do a great job of showing off the battlefield. Even at its most distant, very little of the map fits in the screen, meaning that you can expect to need to move around a lot during play.

An odd chimera of its forebears, there's a lot in this fast-paced RTS that’s a little bit off. Parts of the interface don't work sometimes, inter-match army management is half-baked, and the micromanagement needed to use the game's signature hero units effectively doesn't jibe with the extensive base-building you'll need to support them. But those problems fall away when you’re in the heat of battle. Dawn of War III builds and maintains an organic tension that yields huge pay-offs, and there’s nothing else quite like it.

View Comments (113)
Back To Top
8
Great
About GameSpot Reviews 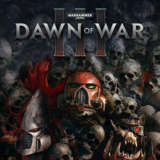 Dan Starkey's been a Warhammer fan since college. While he prefers the fantasy universe to 40K, he’s no stranger to the far-flung future. He's a huge fan of the original Dawn of War and the more recent Battlefleet Gothic: Armada. He was provided a complimentary copy of the game for the purposes of this review.